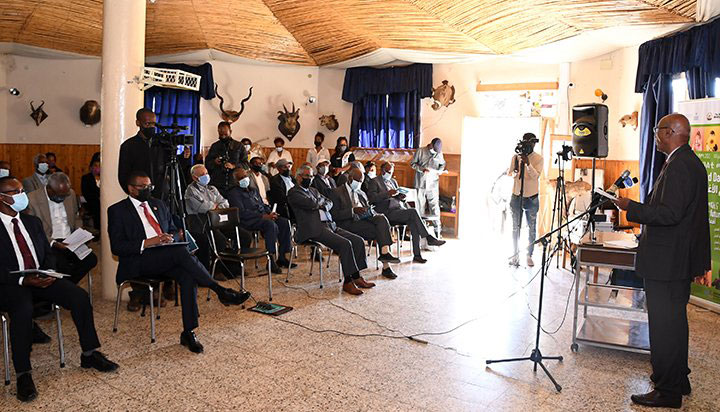 Asmara, 15 October 2021- World Food Day and International Day for the Eradication of Poverty was commemorated today, 15 October at the premises of the Ministry of Agriculture under the theme “Our Actions are Our Future”.

At the event in which Ministers, representatives of UN Institutions in Eritrea, as well as exemplary farmers took part, Mr. Arefaine Berhe, Minister of Agriculture, said that as Eritrea is found in the Sahel region, lack of water is the main limiting factor for food production and that the number one priority of the Government is to implement soil and water conservation programs both on and off-farm.

Accordingly, Minister Arefaine went on to say that in the past 30 years the Government of Eritrea has constructed numerous dams of various sizes mainly for irrigation and has made substantial investment for expanding modified rain-fed agriculture and spate irrigation in the eastern and western lowlands.

Minister Arefaine also said that with a view to increase production and productivity, the government is assisting small holder farmers as well as small and medium scale commercial farmers through introduction of high yielding varieties, pressurized irrigation technologies renewable energy, plastic tunnels or small green houses and mechanization to produce not only primary products but also value added ones.

Speaking at the event, Mr. Saeed Bancie, FAO Representative in Eritrea, said that at the 42nd Session of the FAO Conference` that was held in June of this year member states endorsed the new FAO Strategic Framework 2022-2031 setting out the Organization’s Roadmap to support the 2030 agenda for Sustainable Development through the transformation of more efficient, inclusive, resilient and sustainable agri-food systems for better production, better nutrition, a better environment and a better life, leaving no one behind.

The UNDP Resident Representative in Eritrea, Mr. James Wakiaga on his part, stating that reducing poverty and addressing food insecurity are key policy areas for any government in the process of building forward better, commended the Government of Eritrea’s commitment of addressing food and nutrition security to enhance socio-economic development and social justice, which are key cornerstones of Eritrea’s development agenda.