Seminar to nationals in Germany 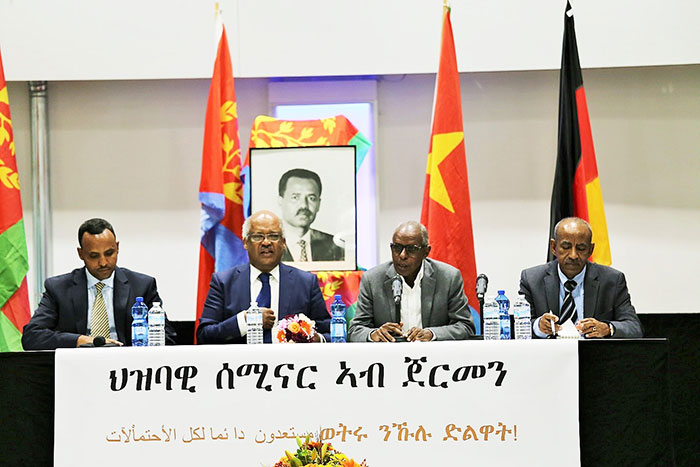 Asmara, 19 October 2021 – The Presidential Advisor, Mr. Yemane Gebreab conducted seminar to nationals in Germany focusing on the objective situation in the homeland and regional as well as global developments.

The seminar that was conducted in Giessen on 16 October was attended by a number of nationals residing in various cities of Germany,

Stating “Conscious, integrated, solid and effective national organizations and activities are the foundations of our victories”, Mr. Yemane expressed that the potency that demonstrated miracle during the armed struggle for independence and safeguarding the national sovereignty will mark novel history in this new era.

The participants on their part commending for the briefing they were provided expressed readiness to reinforce contribution and participation in national development drives as well in national affairs.

In related news, the Eritrean Ambassador to the European Union and Benelux Countries, Mr. Negasi Kassa organized seminar on 16 and 17 October to nationals in Amsterdam and Rotterdam, The Netherlands, on the objective situation in the homeland as well as regional developments.

Ambassador Negasi highlighting the contribution the Eritrean people demonstrated during and after the armed struggle for Eritrea’s independence gave extensive briefing on the regional developments and the responsibility of every national in the emerging new era.

The participants on their part said that such seminars will have significant contribution in developing their understanding on national and regional developments and called for its sustainability.

“Our Future is in our Hands”