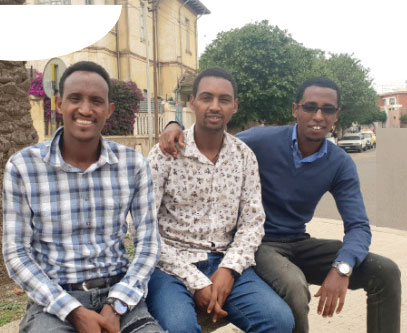 They were among the six youth finalists of the 2021 African World Heritage Day Competition in Eastern Africa. 200 competitors from 11 countries participated in the competition. And here is an interview with the youth engineers who represented Eritrea in the competition and managed to come out among the six finalists: Eng. Michael Berhe, Eng. Filmon Tesfamariam and Eng. Aman Desbele.

Well, the competition was carried out in accord with the World Heritage Day, May 5, where 13 East African countries were invited but 11 countries including Eritrea participated. It was organized by the UNESCO, intended for “Awareness raising and engagement of the youth in the protection and promotion of African World Heritage”. Our project was among the six proposals that qualified for the finalists of the competition from over 200 entries. The other wining groups are from Uganda, Ethiopia, Rwanda, Tanzania and Kenya.

We knew each other starting from College, and we had several finished projects together. Besides, we also shared different ideas and held thorough discussions on each of them. One of the ideas we shared was making a Mobile Tour App which visitors can use to get the needed information about Asmara, the capital of Eritrea; but for various reasons, we didn’t finalize it. It was in the middle of this that the chance to present our idea came up through the competition. We made some modifications to the original idea and submitted it to the competition, which we finally won.

It has been told in many occasions that Asmara has been added to the World Heritage List in 2016. Therefore, as it coincided with what we were already planning, we thought that we better focus on Asmara than taking other World Heritage sites in our region. According to the terms of the competition, our project intended to reach out to the society in general and the youth in particular through a mobile App in a user-friendly manner. So we hope that the App will be helpful in raising public knowledge about Asmara, in addition to boosting their awareness about World Heritage.

As we mentioned earlier, the project has been monitored by UNESCO and its partners. Accordingly, UNESCO has been facilitating the project and has a plan to carry out the project on the first half of November 2021.

It is designed to introduce visitors with the architectural beauty of Asmara which were listed by the UNESCO as a significant part of the world heritage. This includes; the essential facts, history and the current condition of the buildings or monuments in the capital. In addition, it will serve as an official app (Tour App) which gives visitors basic information.

It is difficult to foresee the possible challenges at this point in time. May be, there could be some odds along the way including possible delays in the information gathering process. Other than that, we don’t expect any major challenge that could hold back our project. Speaking of the advantages, we consider this opportunity as a great advantage to introduce our city to the world. Besides, the idea of making this App came ahead of Asmara being added to the World Heritage List.

Obviously, wining is every participant’s dream. So we took part in the competition to win. But it is true that we had certain doubts because there were numerous competitors. But fortunately our dream came to reality. 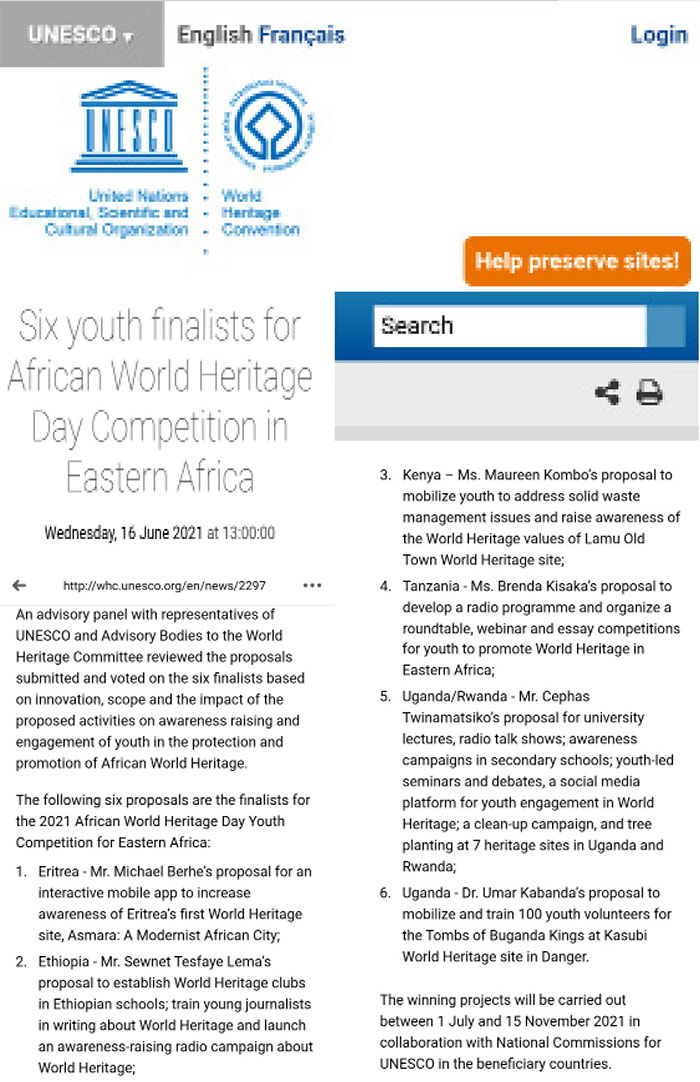 When the UNESCO office in Eritrea called and told us about the news, we were very excited and it really was a very special moment for us. And also we were more invigorated after we checked it by ourselves on the UNESCO official website.

Primarily, we have the UNESCO office in Asmara, and the Asmara Heritage Project (AHP). We also expect the Asmara Municipality Office, the Ministry of Tourism , Commission of Sports and Culture, along with other pertinent bodies to be on our side.

As we came to know later, there are many programs that focus on Eastern Africa, and this is just one of them. And that was our first experience to participate in a competition like this. But we didn’t have any idea about all this before. In fact, we learned about the competition when the National Union of Eritrean Youth and Students (NUEYS) released information about it. For sure, there is not enough information about such competitions, but the youth should look for information and be a part of both regional and international contests of a kind. In line with this, the national institutions have to provide grounds for the young generation to have a wider view.

Yea, we have had some projects we share such as Kebhi, a website, Idu tube and several data bases for inventories and hotel managements.

First and foremost, we aspire to see the successful completion of what we have already started. And after this, we have plans to work on projects which we believe are useful to the community and the society at large.

We want to thank the NUEYS, the UNESCO representative in Asmara, Mrs. Weyni Abay, and Mr. Mengs, whose advises we value a lot in the projects we work on. In addition, we want to extend our appreciation in advance to those who will work with us in the completion of our project.

My Sweet Memories About Eritrea and its People