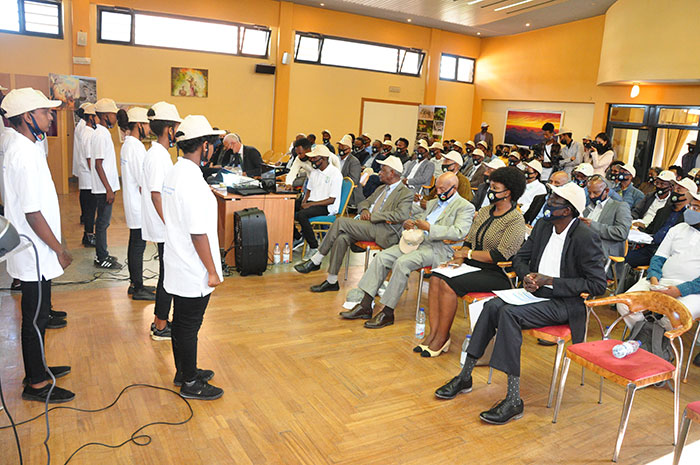 Asmara, 05 November 2021– Conference to mark the 26th United Nations Framework Convention on Climate Change that is currently underway in Glasgow, the UK, was conducted today, 05 November in Asmara.

In his keynote address, Mr. Tesfay Gebreselasie, Minister of Land, Water and Environment, said that while marking the prominence and the hope that the world attaches to the negotiation process of the Conference, it will be appropriate on the part of Eritrea to reflect not only on expectations from its deliberations, but also indicate what is that Eritrea has been doing and will have to continue doing to contribute to the success of the ultimate objectives and familiarize the youth in different government institutions the motive behind convening the Conference of Parties 26.

Minister Tesfay went on to say that even though Eritrea’s contribution to the worrisome global emission is negligible, as a country hit hard by the impact of climate change, adaptation has been priority strategy during the last three decades. He also said that Eritrea has been mobilizing communities in implementing integrated programs aimed at restoring degraded land, soil and water conservation, and rehabilitation of the ecosystem and that the achievements made are encouraging.

Ms. Amakobe Sande, UN Resident Coordinator in Eritrea, on her part said that unless drastic measures are taken to address the temperature that reaching new highs and biodiversity reaching new low, warming of oceans, acidifying and choking with plastic waste as well as to the uneven rain distribution, unprecedented flooding and droughts will make vast stretches of the planet dead zones for humanity.

At the Conference timely research papers were presented and the participants conducted extensive discussion and adopted various recommendations.