Six young Eritreans are planning to ease the burden of others. They have accomplished the definition and creation of Artificial intelligence. They were able to create a system that can correctly interpret external data, in the end achieving the specific goal of Tigrigna speech recognition. We have interviewed three out of the six developers.

My name is Bereket Desbele, and I was born in 1998. I attended Fereselam elementary and junior school and then learned at Debrexion Kedsti Maryam Secondary School. I went to Sawa and scored 3.8 on the matriculation exam. I joined Eritrean Institute of Technology (EIT) at Mai-Nefhi and studied computer engineering.

My name is Mussie Kaleab; born in 1999. I learned elementary and junior school in Tsaeda Christian and then went to Debrexion Kedsti Maryam Secondary School. I scored 3.6 on the matriculation exam. I also went to EIT and studied computer engineering.

My name is Rutta Fissehatsion; born and raised in Akria, learned at Fenote Akria Elementary School, Fethi Junior School and Harnet High School. The same as my group mates I was a member of the 30th round in Sawa and studied computer engineering at EIT.

Bereket: When I was a child there was a computer in the house and I was playing around with it. So when I was growing up I was interested in the computer and how it functions. But the main influence came from my uncle, Dr. Yonas Meresee. He’s a programmer and one of the people who helped us a lot in our current project

Mussie: Like Bereket, when I was a kid there was my father’s computer in the house. He was distance-learning and I grew up fascinated by it. I also had an interest in electronics. And I thought the department that combines both computer technology and electronics is computer engineering.

Rutta: As we all are witnessing the world is on a fast track towards technological development and I realized that at an early age. I figured the only way to be on that fast track was to learn how to access computers and to fully accomplish that I had to choose computer engineering. 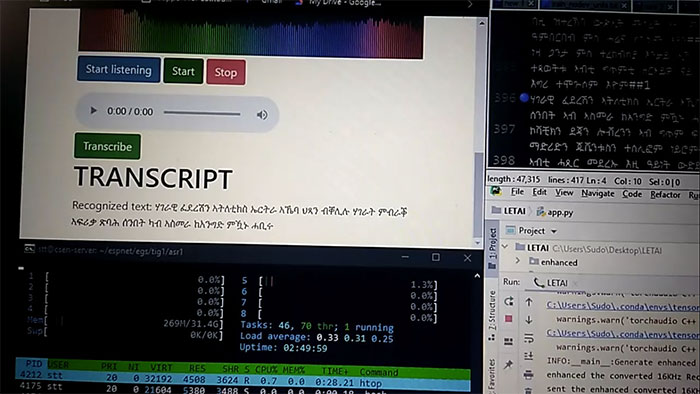 Our senior year project is Artificial Intelligence (AI), which is Tigrigna speech recognition converting to text. The person who came up with the idea is our group mate, Yonatan Yosef. He was inspired by the AI courses we took in our fourth year. He believed if we accomplished such a project it would be useful for Tigrigna speaking people and will be the first of its kind. He could not be here today since he is in Sawa doing his national service. Although he was the originator of the idea we worked on it as a group of six. Our group consisted of Ahmed Idris, Bereket Desbele, Mebrahtu Fissehaye, Mussie Kaleab, Rutta Fissehatsion and Yonatan Yosef.

Mussie; the group was formed because we all were roommates in college. Of course, Rutta was not our roommate but we believed in her knowledge and power to do the task. So we chose her to work with us. Honestly the process of creating our project was not easy. Our first obstacle was the pandemic, Covid-19. On top of Covid, our project is one of a kind in Eritrea because there were very few and only low level AI created in Eritrea. This meant we had to start from scratch. Luckily our advisor, Dr. Yemane, was an expert in AI and natural language processing.

Bereket; As every AI project depends on large amount of data, we needed a lot of data. Particularly on this project we needed corresponding data of text and speech. We have built new data set that could be used for other further future research undertakings. We collected most of our text data from Hadas Eritrea newspaper and the speech data was collected from our friends. We collected almost 30 hours of voice data, consisting of 25 male and 26 female voices. After collecting all the data we went to pre-processing, which takes a lot of time to clean up. Also, on top of that we had to read huge amount of books on how to create it since we only took two courses on how to build AI models.

Our main obstacles were in collecting data; the lack of expertise in that area was definitely difficult. We have asked several scholars for help but so many emails went unanswered. Another problem was in computing; we could not find a desktop that was capable of handling the training we were supposed to feed her. Fortunately, the college was able to supply us with a server that could perform that. Also, the Internet was a big problem; but the Minster of Communication and Transport was kind enough to assist us. Then, we discovered that Google could allow you to use 300-dollar worth of resources for free, and we used that really wisely. 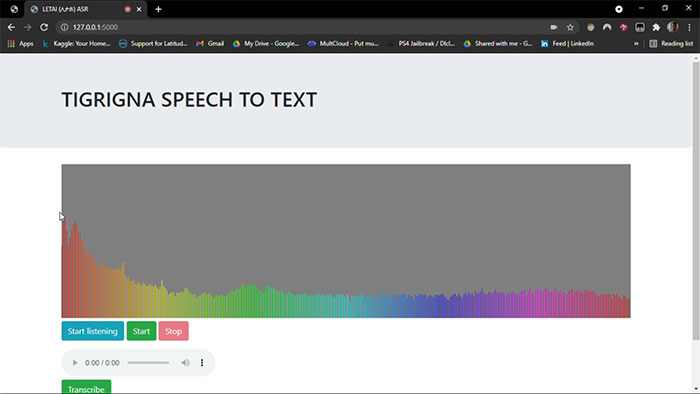 We believe every one could benefit from it. However, it is intended to be used by the disabled, especially people who have bad eye sight or cannot see and illiterate people. Understandably writers and journalists are on top of the list of user.

Rutta, there are few women in the Department of Computer Engineering and you’re the only female in the group. What is your attitude toward that?

Yes, that’s is true! We live in a society that partially believes that women should stick to certain jobs, and being raised in that kind of an environment could influence women’s choices of fields of study later in life. The few number is not limited to the Department of Computer Engineering; the whole college of engineering is dominated by males. Nevertheless the number of women is increasing with time and I advise younger women to be fearless when choosing departments.

Our plan is to develop it further. The approaches we applied are a bit outdated, so we want to work on upgrading it and supplying it with more data. Honestly, we will not stop working on it.

Our parents are our main supporters, so we thank them. We thank Dr. Yemane for his expertise, our friends, who supplied us with the voice data, for their time and the Minster of Communication and Transport for his generosity and the members of EIT.