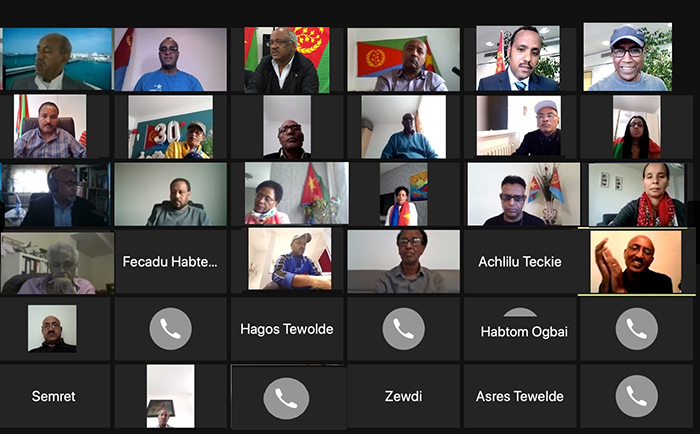 Asmara, 08 November 2021- Members of the PFDJ organization and the National Union of Eritrean Women in Germany conducted virtual meetings aimed at strengthening their participation and contribution to the national development programs.

At the annual meeting the members of the PFDJ organization branch in Central Germany conducted, Mr. Yohannes Woldu, Charge d’Affairs at the Eritrean Embassy, and Mr. Zersenay Gebretensae, chairman of the PFDJ organization, gave extensive briefings on the objective situation in the homeland and the role of the nationals in this new era prevailing.

Presenting the annual activity report, Mr. Kahsai Tewolde, head of Public and Community Affairs, called on the members to play a vanguard role in national affairs.

The Eritrean General Consul in Frankfurt, Mr. Kibreab Tekeste, on his part called on the members of the PFDJ organization to play a due role in cooperation with other national associations in the implementation of national development drives.

The participants on their part expressed conviction to live up to expectations.

In the same vein, 54 members of the National Union of Eritrean Women from 23 sub-branches in Germany conducted six months activity assessment as well as on the charted out programs for 2022.

Speaking at the event, Ms. Okba Afwerki, head of the union branch, commending the participation of the members in the national affairs, called for reinforced participation and contribution in the new era.

The participants also conducted extensive discussions on the charted-out programs for 2022.