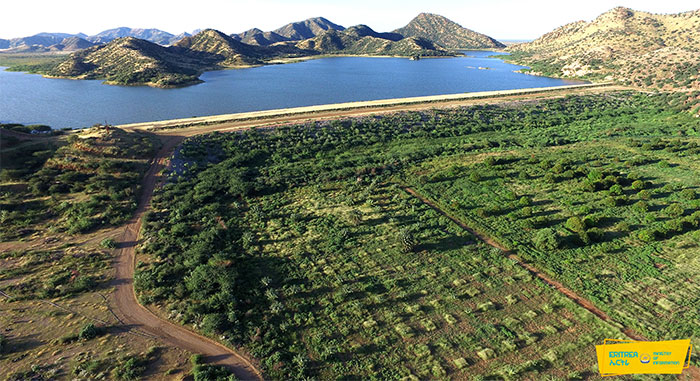 The construction of Gerset dam, which triggered the transformation of traditional farm practices to advanced irrigation systems, is a stepping stone toward the expansion of mechanized farm projects and change in the living standards of local communities. Farm activities that have been flourishing in Gerset and its surrounding areas are the result of the construction of major dams in Goluj sub-zone.

Fruits and vegetables, cereals, oil seeds and date palms are grown and animals raised at the project’s farm. Gerset farm project has now shown remarkable progress with its ample harvest: harvest of fruits from a plantation of around 230 hectares, tomatoes from 100 hectares, onions from 50 hectares and pepper from a few hectares. A nursery station within the farm project has been providing seedlings, and graduates of horticulture do research to provide select seeds.

Above all, Gerset farm has been a training center for young graduates who are now armed with practical experiences that are instrumental in moving the farm project forward. Over 500 professionals, who have over five years of experience in Plant Protection, Horticulture, Agronomy and Agricultural Engineering and other disciplines have been running and making a difference in all major farm activities of Gerset farm. Mr. Amine Tesfamichael, Manager of Gerset Farm, said besides the contribution they have been making to the development of the farm, the graduates are making use of the opportunity provided for them to hone their skills.

Mr. Amine believes that Gerset farm is highly strategic owing to the availability of abundant water resources and the vast farm plains convenient for the cultivation of a wide range of plants using an advanced irrigation system. 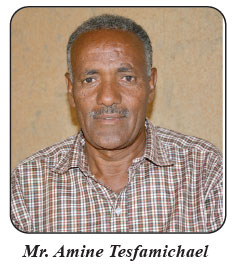 While the achievements registered so far are commendable, Mr. Amine noted, there have been deficits of supplies of irrigation materials which have been deterring the possibility of moving the farm activities to a higher level of excellence.

The journey traveled so far has shown the overall potential of Gerset farm, and the expansion plans have been carried out based on this development. “We are now looking forward to addressing technical challenges and to increasing production through the introduction of more advanced irrigation systems, improved supply of electricity and efficient distribution facilities for a judicious utilization of the available water resource,” Mr. Amine added.

Over 2,000 inhabitants of Gerset, who are from almost all ethnic groups of the country, and residents of Aklelet and Tesenei work in the farm. They are each given 45 kilos of crop and 500 Nakfa of pocket money a month and are given transport services from their homes to the farm fields.

The change in the life style of the local communities is the result of the ever flourishing farm project. The women, who used to be confined to their homes, now work at the farm project. The residents are now aware of the benefits of the farm which enabled them to cultivate their farms using the knowledge they acquired at the project and the technical assistance they get from the young graduates of agriculture.

According to Mr. Amine, the launching of the farm projects in the area opened a venue for multifaceted benefits that is instrumental in improving the living standards of the local communities. The benefits include, among others, the provision of electricity to the households, the supply of potable water, the provision of transportation and veterinary services. By working in the farms the community members now easily manage to earn their living and send their children to nearby schools.

Gerset farm, which is run by Eritrea’s Crops and Livestock Corporation (ECLC), has been improving its livestock resource with the introduction of Hameria cattle and Gerej sheep species. Mr. Amine said that the male sheep and bulls have been sent to medical and educational institutions to meet their demands of meat.

Sharing his observation of the change in the ecosystem of Gerset and its environs, which he visited during the struggle for independence in 1988 and again in 2000 in the post-independence period, Mr. Amine said, “Transforming an area which was characterized by thorny shrubs into a green agricultural hub that provides employment opportunity for the people of the area and supplies a variety of agricultural produce to the larger Eritrean population is a dramatic achievement.”

What has been accomplished to date would definitely pave a way towards extending the farm areas to meet export demands in the future. “Once we are able to grow tomatoes in two seasons and provide Alebu Banatom factory with sufficient supply to enable it to operate in its full capacity, the farm activities will impact the country’s agro-industry,” Mr. Amine elaborated.

Fruits from the project’s farm have been distributed to local markets while the country is in partial lockdown due to the Corona virus outbreak. What is more, more and more citreous fruits have been sent free of charge to quarantine centers. For instance, over 2,000 quintals of mangoes and oranges have been transported to the quarantine centers in the central region.

The ECLC has been assisting the farmers in the area by renting tractors at a nominal price and offering free of charge veterinary services and pesticides. The medicine supply center in Goluj has been meeting demands of farmers in the sub-zone.

All types of citreous fruits, cereals and cash crops tested in Gerset have been showing remarkable yield, which is a testament to the fertility of the area. Once mechanized farm activities are expanded to cover more hectares, there will be a dramatic transformation in the country’s agriculture sector, and the employment opportunity that comes with these developments will change the socio-economic status of the local communities.

Urban Hinterlands in Antiquity: Reflections from Matara and Keskese