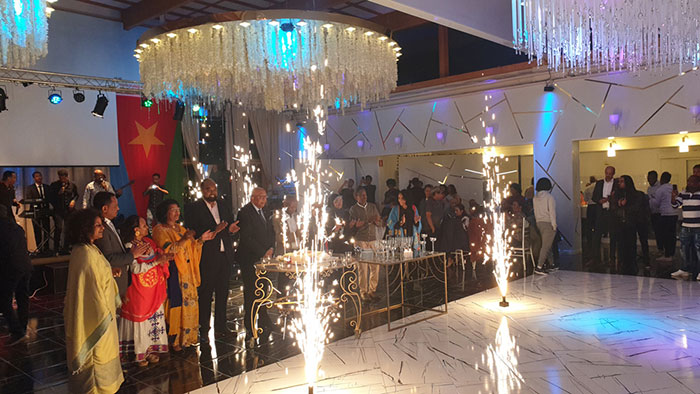 Asmara, 12 November 2021- Eritrean nationals in Stockholm and its environs have contributed over 50 thousand Kroner toward the national resilience program.

The nationals extended the financial contribution during a belated 30th Independence Anniversary as well as the Diamond Anniversary of the beginning of the Armed Struggle for Independence they conducted on 6 November. The celebratory event was delayed due to the restriction guidelines the Government of Sweden issued to fight the spread of the COVID-19 pandemic.

Commending the Eritrean people and members of the National Defense Forces for the resilience they are demonstrating during the prevailing new chapter, the nationals expressed readiness to reinforce organizational capacity and bolster participation and contribution in national affairs.

Speaking at the event, Mr. Sirak Bahlibi, head of Public and Community Affairs indicating that the meetings that the nationals held in a virtual format during the COVID-19 pandemic attest to the strong nationalism and resilience they possess commended the nationals for their contribution at the prevailing new era.

Mr. Yonas Manna, Charge d’Affairs at the Eritrean Embassy in Sweden, and Mr. Isaias Gebray, Head of Consular Affairs on their part commending all parties that contributed to the realization of the celebration, called for a strong effort toward strengthening organizational capacity and participation in national affairs.

At the events, nationals from several Swedish cities including Stockholm, Uppsala, Eskilstuna, Arboga, and Norenberg, as well as Norway participated at the celebratory event that was highlighted by cultural and artistic performances.

Training on discovering and researching ancient and historical heritage