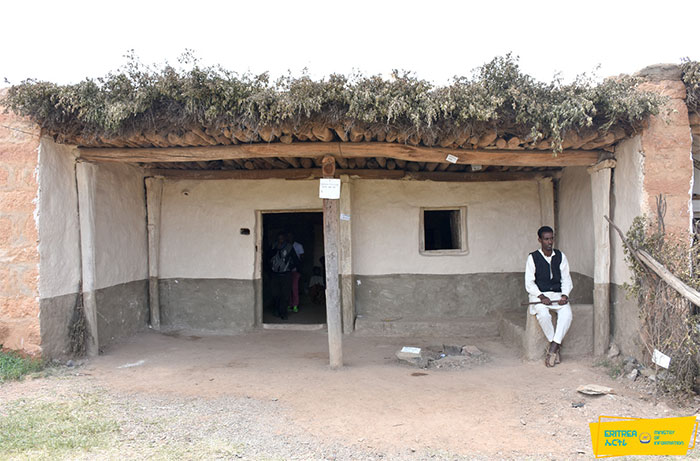 Hidmo is one of the traditional houses found in the highlands and in some parts of the eastern escarpments of Eritrea. It is made of masonry wall, wooden ceilings and soil-roof and is said to have been introduced by the Semitic people who came from Southern Arabia around 1000 B.C.

The masonry walls on which the beams are placed are usually made from hewn stone and mud. The beams are then overlaid with rods and branches of trees before they are covered with soil, which serves as the roof. Inside, huge timber poles are erected to carry the heavy roof joists. The number of timber poles depends on the size of the house. The term ‘hidmo’ is derived from the verb ‘ha’deme,’ which means to cover with concrete.

The making of hidmo requires plenty of wood to support the concrete made of soil. For this reason, the gathering of wood is one of the biggest tasks in the building process.

At the entrance to the hidmo there is a porch which is called gebela, a hangout for the family where the yoke often hangs from the ceiling.

Inside, there is midri-biet where most of the daily activities happen. The wall is plastered with mud and decorated using colors made from leaves. The midri-biet is multifunctional; it serves as a living, dining and bed room. The bed (nidi), bench (medeb) and shelf (sragala) in midri-biet are all made using stone and mud. In addition, there are big barns made of mud that are erected in the house and help separate the midri-biet and wushate.

Wushate, which is adjacent to the midri-biet, is reserved for women and serves as the kitchen. It has a grinder at the very entrance, mogogo (a traditional oven for making bread — injera and qicha), moqlo (mogogo-like but made of metal instead of earth), which is used for roasting grains and baking meteka (bread used in brewing the traditional drink siwa), gulisha (a traditional stove), and gubitish (used as a steam bath for women).

Gubitish is a shallow hole, about 20 cm in diameter and 10 cm in depth, dug in the ground. Women who want to have a steam bath place fresh leaves and roots from trees in the hole and burn it to create smoke. Then they put butter on their head, sit on a stool near the burning leaves and roots and cover themselves with a blanket and stay there for as long as they can and leave before they start to feel chocked by the smoke.

Some hidmos have a small exit door through wushate called “higua”, often used as a short cut passage to the backyard. And there is also a small window for the purpose of light.

Within the courtyard there is dembe (space for the cattle and pack animals), which has a roof but no doors to give the animals freedom to move around in the whole compound. There is also unroofed encircled space for the smaller domestic animals such as sheep and goats. The chicken are usually kept within the main house.

The Identity is in the Run: Eritrean Duo win Cross Internacional de Atapuerca

Deki Erey: the Vast Opportunity of today and Tomorrow