The Identity is in the Run: Eritrean Duo win Cross Internacional de Atapuerca 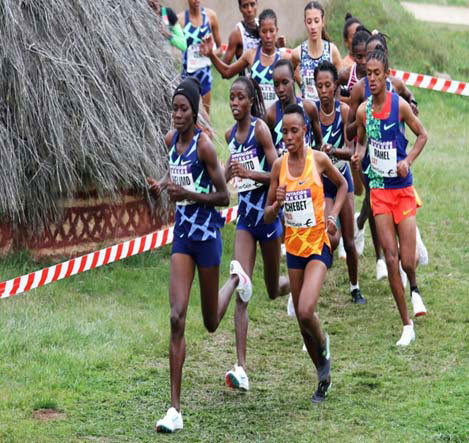 The 17th edition of the Cross Internacional de Atapuerca, the fourth Gold standard meeting in this season’s World Athletics Cross Country Tour, was won by Eritrean Olympic duo Rahel Daniel and Aron Kifle much to the adulation of the international athletics arena.

The event which was held on 13 and 14 November 2021 began with the women’s 5000m race. 19 year old Rahel Daniel, in her second international race won the competition, in the process having beaten household names Margaret Chelimo and Beatrice Chebet.

Rahel, who run the entire race just behind Chelimo and Chebet, took her chance in the final straight to sprint past the Kenyans and cross the finish line in 25:03.

The Eritrean teenager who took part in her maiden international competition this year at the Tokyo 2020 Olympics was the underdog coming into this competition with Margaret Chelimo the clear favorite to win the event. However Rahel had other ideas.

The race started with a group of 14 having completed the first lap just under 6:28 as the Kenyan contingent set the pace early on. Halfway through the race, the group disintegrated, Beatrice Chebet, Nora Jeruto, Celliphine Chespol, and Rahel Daniel the only ones to keep up with Chelimo’s pace.

Beatrice Chebet took over after a few laps and Chespol withdrew from the group, leaving only four runners in the last 100 meters to battle it out for first place. In the final straight, Rahel Daniel emerged from the group and took the lead in surprise that had the fans on the edge of their seats. The Kenyans were rattled, they had in front of them little known Rahel leading the race and they couldn’t keep up as the Eritrean crossed the finish line in spectacular fashion holding off world under 20 cross country champion Beatrice Chebet and 5000m world silver medalist Margaret Chelimo. Nora Jerato who won the Diamond League final in the 3000m last September finished fourth overall, while 3000m steeplechase world under 20 record holder Celliphine Chepsol came fifth.

You have here experienced runners who are record holders, winners of several other events and numerous other accolades under their belt and a 19 year old Rahel taking part in just her second international event. For Rahel, the least experienced runner in the pack to actually go out there and beat well-known athletes and claim her first international win is nothing short of remarkable as she officially announces herself to the athletics world.

Little did people at the event know that Rahel set the stage for another Eritrean win the following day. This time around, Aron Kifle did his bit and stopped Rodrigue Kwizera from winning another cross country victory in the 9000 meters race.

Proceedings began with last year’s winner Ouassim Oumaiz and Carlos Mayo leading the main group in a rather slow opening. 10 minutes into the race Kwizera moved to the front leading a group of 12 men.

Aron Kifle upped the ante with his blistering speed in the final stages of the race as he opened a four second gap on Kwizera, the Ayeko brothers, and Oukhelfen on the penultimate lap. 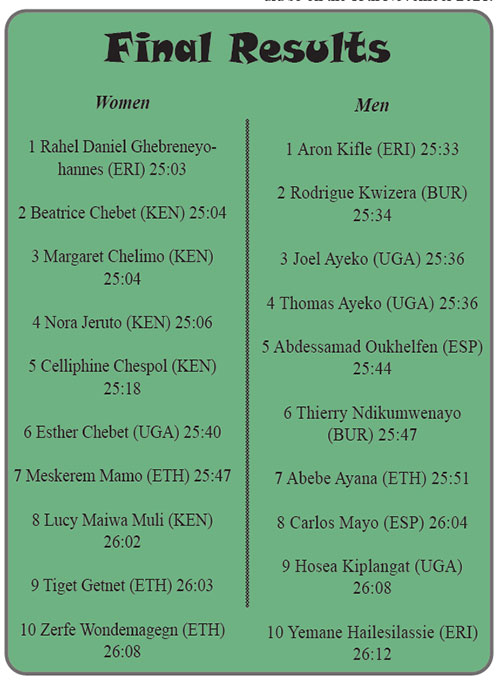 Kwizera easily left the Ayeko brothers and Oukhelfen on his rear and went on a hot pursuit of Aron who always looked comfortable at the front from the get go. Kwizera managed to close the gap in the final 300m but was never going to be within reach of Aron who finished the race 25:33, a second faster that Kwizera’s 25:34 while Joel got the best of his brother Thomas to claim third.

The 17th edition of the Cross Internacional de Atapuerca closed a fantastic two days competition for Eritrea as both the women and men’s event was won by Rahel and Aron.

In an interview with Eritrean sports journalist Tesfaldet Mebrahtu after the race, Coach Livingstone Abraham said, “The result wasn’t easy”. “We had to rigorously train our athletes from the 1500m to the 5000m to have them race ready and we saw quick results but as I said it was not easy.” Owner of the Mereb Setit training center, Mr. Teweldebrhan Tesfagaber, on his part stated that this was a victory for the nation and added that Olympic athlete Rahel is a leading example for current and future aspiring athletes. Mr. Teweldebrahan on the occasion also called upon relevant stakeholders to invest on helping female athletes across the country.

Rahel Daniel and Aron Kifle’s victory in Spain is another achievement in a string of many others that will surely add to the pedigree of the country’s ability to produce athletes who can not only compete in the world stage among the very best out there but also have the ability to win, succeed and hold their own just as a relatively less known 19 year old Rahel Daniel did so on the 13th November 2021.