The Nurenebi File: A Review 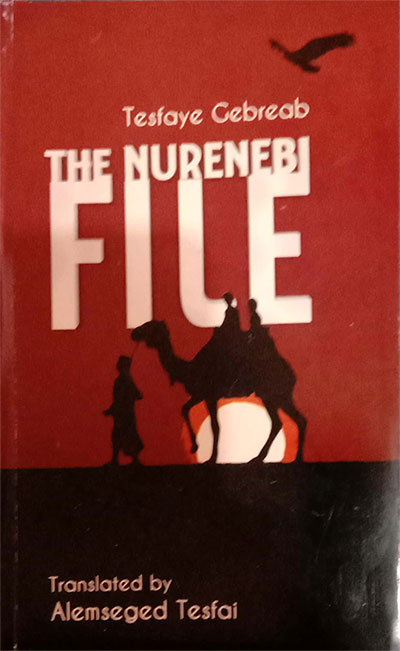 “The Nurenebi File,” translated by author and historian Alemseged Tesfai, is a historical novel that chronicles the lives of four generations of a family across a time spanning the Italian, British and Ethiopian colonizations of Eritrea. It is the story of ordinary Eritrean individuals who, for the freedom of their beloved country, showed great acts of heroism and sacrifice. The story follows the titular character, Nurenebi, as well as the three generations that come after him who, in their own ways and in their own times, attempted to break free from the shackles of colonial rule.

Before going any further, I must first admit that I am not a historian. I am not by any measure an expert or an authority of Eritrean and Ethiopian history. On second thought, I actually realized that my being a layman in this particular topic could be an advantage as I may be able to write from the point of view of an ordinary reader.

If someone were to ask me to describe The Nurenebi File with just one phrase, that phrase would be Four Generations in One Book, a quality that makes the novel quite unique. It’s a historical novel that explores the history of one hundred and fifty years cleverly woven into the lives of the Nurenebi family. The book falls somewhere in between a novel and a history book, every so often oscillating from one end to the other. The novel is written using a combination of writing styles such as prose, references, historical accounts, folk songs and poems, all of which help provide a rich historical context for the story. The main characters are all real people, as the pictures in the book show, yet their conversations and interactions have been brought to life with some level of imagination on the part of the author. For instance, while Nurenebi was, in fact, a real person, his detailed experiences during the drought, migration and his days as a shifta (outlaw or rebel) involved works of fiction.

The fact that the story is based on a real family makes it all the more real for the readers. It provides an insight into the lives, experiences and state of mind of the Eritrean people during the past century. History ceases to be a list of events and dates, as it is often reduced to, and historical figures cease to be formidable beings of the past; this book breathes life back into them all, beauty and ugliness alike.

From the descriptions of the drought of 1888 to the descriptions of the bustling and lively Massawa of the 1890’s, and the Battle of Adwa in 1896, I was continuously moved by the vivid imagery and description so much that I could see it all, scene by scene, in my mind’s eye.  In the first few pages, the author himself talks about how those documents that led him to write the book made him feel.

“The windows and doors of the past took turns to open up for me era by era. The ears of my conscience heard all […] the discourse, anger, laughter and pain of the ages. The eyes of my conscience saw all […] the plains, the mountains, the plowing fields […] the faces, the brows, the moisture in the eyes…I felt as if I was there myself.”

The author was able to transmit his own vision to the readers, allowing us in turn to vividly imagine and feel as if we were there ourselves, which I believe is a big accomplishment. 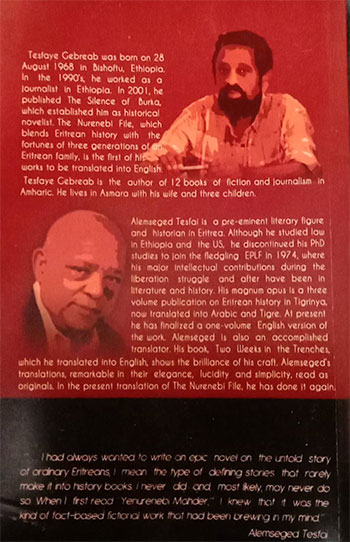 Among numerous things that I learned about Eritrean and Ethiopian history through “The Nurenebi File”, I was surprised to learn about the slave trade in East Africa, of which I had no previous knowledge. I was saddened by the treatment of Eritreans as “second class citizens” in their own country by the Italian and British colonizers. I was tearful when I read that a certain mother, upon receiving her son’s certificate of martyrdom, “[with her face] washed with tears,[…] let out a ringing ululation” of pride for her son’s courage and sacrifice; and I was heartbroken outright when a certain character told his pleading mother that he was leaving to join the war for Eritrea’s liberation. I also found it interesting that people like Gabriel Edmondo and Iyasu Yacob, who often found themselves on opposing sides regarding patriotic discussions, ultimately wanted the same things. They simply differed in method. But, above all, I was proud to read about the ordinary-yet-extraordinary heroes such as Nurenebi, Gabriel Edmondo and Mekonnen Gabriel, all of whom showed incredible amount of courage by rebelling against their respective colonizers. In fact, this novel made me ask: How many other people have done similar acts of heroism, yet slipped through the cracks of time? How many other ordinary heroes have faded away from memory? It made me want to uncover previously untold stories of past generations.

The best books permit their readers to delve into the story wholeheartedly, traveling through time and space for a peek at the reality of those times. “The Nurenebi File” does exactly that: it allows the reader to witness history happening through the eyes of the main characters, one generation after another. It also allows the reader to witness the main characters in their various stages of life. Nurenebi’s grandchild, Gabriel, for instance, goes from being a young child born to Nurenebi’s son, Edmondo, to a young man working as an interpreter for the Italians, to a middle-aged father living in Addis Ababa, and to an elderly man living in Asmara.

I find it impossible to talk about “The Nurenebi File” without talking about the English lexicon and orthography used by Alemseged Tesfai. The novel is written in a captivating, sophisticated and emotion-provoking manner while also presenting the history in a clear and elaborative way. The novel reads as if it were written by someone for whom English is the first language, not a second. While I am not able to read the original Amharic version, I suspect that the English translation has done it justice given that the English version is gripping. The folk songs and poems, which I imagine must have been the hardest parts to translate, were impressively executed.

For anyone seeking to learn about Eritrean and Ethiopian history through a novel, this is certainly the book to read and re-read.

“The Nurenebi File” is definitely a legacy for Nurenebi’s family as it is a legacy for all of Eritrea and generations to come.