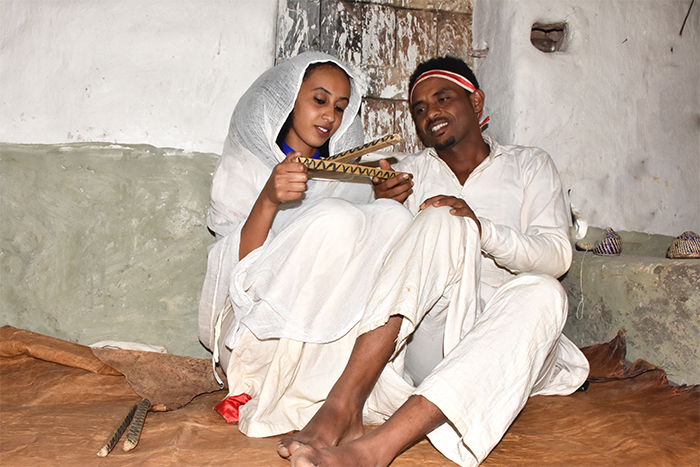 Once upon a time while stroll­ing around the town of Adi Keih, Southern Region, I overheard some elders discussing wed­ding traditions during the good old days. I particularly was intrigued by the new word I heard; Sre leb­elba. As they kept on chatting, I couldn’t help but excuse myself and intervene to ask some questions.

It is a type of traditional cloth­ing young brides wear during their wedding in the highlands of Eritrea. This type of clothing is actually a traditional trouser-like underpants called sre lebelba. The name differs from place to place. Some call it sre lebelba and others mefthi shirara. Even though their names differ from place to place, the meaning of the pants is the same.

Although my article is mainly based on interviews conducted with some elders in the town of Adi-keih alone, I also tried to col­lect some supplementary data. There is some debate regarding the use of pants. Some people believe that the young brides wear the pants to conceal what is under­neath their dresses when the groom carries them to the mule. Others ar­gue that this being right, the true meaning of this dress, which they believe was not worn by all brides, is to show how chaste the bride is. It is also said that it was frequented mainly by higher-class people.

As I walked around and bom­barded the elders with questions, they don’t seem to have the exact information of how, where, and when it originated but they know by heart the stories and tales of sre lebelba from their ancestors.

Wedding traditions vary greatly between cultures, ethnic groups, religions, countries and social classes. Most wedding ceremonies involve an exchange of vows by the couple engaged and presenta­tion of a gift (offering rings) as symbolic items. Among the Er­itrean societies, wedding ceremo­nies are among the most important and respected events. The family of the groom, in the case of the Tigrinya ethnicity, are the ones who go to the bride’s family to ask for the hand of their daughter in marriage in a very convincing and wise way. And there comes the part of giving sre lebelba, precious and expensive gift to the bride by the groom’s family.

In those times, it was a social taboo for a woman of the Tigrigna ethnic group to wear a trouser because it was considered unethical in the society. There is only one condition in which a girl is asked to wear a tightly tied trou­ser called sre lebelba. Lebelba is only worn by the girl at her wed­ding day when she departs her home to the groom’s village. That is the time when the girl is consid­ered as a fully grown woman and the last time she would be given a motherly conversation of how to be a good wife. 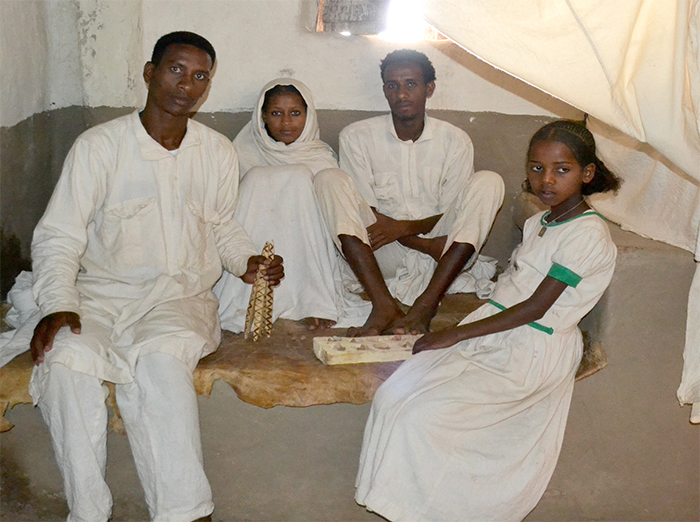 Sire lebelba is made from cot­ton which is called “telfi” with a string lasting at the bottom of the trouser and it also has lacing called “mefthi shrara or knat”,” hambe­lay”. But it has to be kept in mind that this is to be worn underneath the white wedding attire called “jedid” which had a very beautiful and appealing design also called “telfi”. Before depart­ing for the ceremony, the bride’s mother and sister call the best man to bring a mule for the bride’s transportation to the groom’s. The main purpose of sre lebelba in this case is to cover the bride’s private parts. There is also a fable that the only time she can undo her trouser is if she is satisfied with half of the money she gets from the best man who is devoted for the day to the requirements of the bride.

If she doesn’t receive what she asks for, she has the right to refuse to untie the sre lebelba. But the best man gets the money from the other friends if he doesn’t have it and he is aslo responsible for bring­ing “mefthi shrara”, the lacing.  Then she gives  her consent for her husband to untie her. This type of ceremony is done on brides who have kept their virginity, which proved dignity and purity. A bride who doesn’t pass the test is not accepted by her in-laws or by society. This was deemed as sinful in religious terms in a highly pious society.

Before the use of sire lebelba, some sources told me that there was this clothing called Korbet Shirara. This clothing was made of skin, with a lace at its tip called mrana and at the bottom of the dress, there were pieces of jewelry made of sea beads called zaegol. Wearing that they used to go out from their house escorted by their family members singing joyfully because they were proud sending a vir­gin girl to get married. This dress showed how young brides were pure and virgin.

During the time of interview­ing, the elders were very delighted and excited to give me the little information they know about the subjects, but they also shared their concern on how the beautiful cul­ture is fading through time.