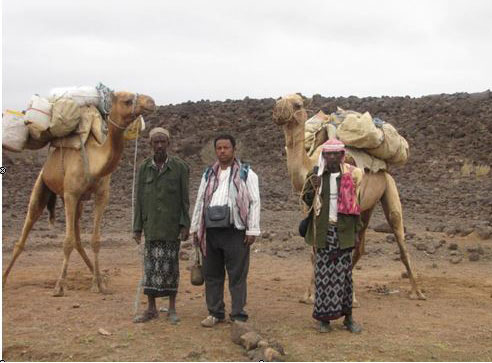 The critically endangered African wild ass and the common domestic donkey are two similar-looking and related animals that are both important to the people of Eritrea, but for different reasons.

Domestic donkeys have been found in Egyptian tombs over 5000 years old. The process of domestication is even older. As human agricultural societies developed in the Middle East and Egypt, wild asses were captured, domesticated perhaps throughout hundreds of years, and used as beasts of burden.

Historically, three subspecies of African wild ass were found in North Africa and the Horn of Africa. The ancient Atlas wild ass (Equus africanus atlanticus) lived in the Atlas Mountains of Morocco, Algeria, and Tunisia.

Roman murals, over 1700 years old, with the images of the Atlas wild ass, have been found in Algeria. This ass may have gone extinct during Roman times due to hunting. The subspecies were described in 1884 based on bones found in northern Algeria.

There is now some potentially good news based on our 2018 biodiversity survey in the northern Anseba region. We talked to local people who had lived in this part of Eritrea for many years. When we showed them a photo of a Nubian wild ass, two people recognized the animal and said that small numbers were still present in the mountains near the Sudan border.

One man told us that he had seen two Nubian wild asses drinking water at a spring one year before our visit. The site is very remote, and access is difficult. A biodiversity survey team needs to travel to the spring and set wildlife camera traps.

Photographic evidence would be proof that the Nubian wild ass is not extinct but persists as another example of Eritrea’s uncharted biodiversity.

The recent history of Eritrea as a colony of Italy, a land under British administration and as a region annexed to Ethiopia, has not been kind to Eritrean wildlife. During the Italian colonization period, the hunting of large mammals caused the extinction of some species, including lions and the black rhinoceros. Extensive deforestation to clear land for agriculture significantly reduced the habitat for animals like leopards and Eritrean warthogs.

Hunting and overgrazing by domestic animals forced the Somali wild ass populations to retreat from arid parts of the Danakil Depression.

Italy lost all its African colonies during the Second World War, and a British Military Administration governed Eritrea until 1952. When the British left, Eritrea became part of Ethiopia. After a long struggle for independence from Ethiopia, the Eritrean freedom fighters won, and Eritrea became a member of the United Nations in 1993.

Since independence, the governmental policy has required preserving natural habitats and protecting wildlife, including wide-ranging African species, species restricted to the Horn of Africa, and species unique to Eritrea. The Forestry and Wildlife Authority works in every Region to ensure that regional and national programs are implemented.

An example is a very successful program for protecting the Horn of Africa restricted Critically Endangered Somali wild ass (Equus africanus somaliensis). A hundred years ago, thousands of individuals lived in arid and semi-arid regions of Eritrea, Ethiopia, Djibouti, and Somalia. Human activities in the area reduced the numbers until only a few hundred remained, with most in the Danakil Depression of Eritrea, where they are respected and protected by the Afar People of Eritrea.

In the Afar culture, killing wildlife and cutting down trees is strictly prohibited, and they believe that if they cause any harm to forests and wildlife, they will be punished by God with drought.

The Forestry and Wildlife Authority has an ongoing research program that monitors Somali wild ass populations in the Northern Red Sea and Southern Red Sea regions. Afar scouts are hired to observe population trends in the different family groups of asses.

These scouts have been given mobile phones by the office of the Wildlife Conservation at the Forestry and Wildlife Authority in Asmara. The scouts call the office regularly to report their observations, and the office goes to the Danakil Depression often to meet with the scouts and village elders.

The Forestry and Wildlife Authority has an ongoing research program that monitors Somali wild ass populations in the Northern Red Sea and Southern Red Sea regions.

I was with Futsum Hagos, Head of the Wildlife Conservation at the Forestry and Wildlife Authority three years ago on a biodiversity survey around the site of the Colluli Potash Project. On the road to the project site, we stopped to observe a group of four Somali wild asses resting in the shade of a large acacia thorn tree. The highlight of my first visit to the Danakil Depression saw one of Eritrea’s National Treasures.

Sirs, If you Want to Gossip