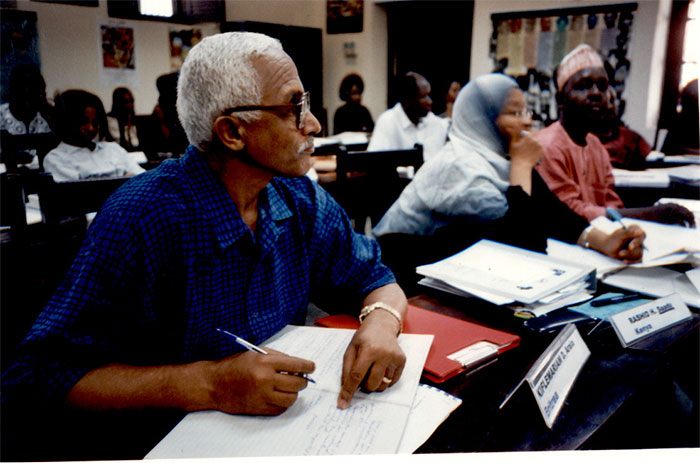 Colonel Dawit Araya is one of the most devoted people who proved that age and circumstances do not deter one from realizing their dream of pursuing higher education and that if there is a will there is a way.

I was born in Zagir in 1949. My parents, who were farmers, were very fond of education and enrolled me at a school when I was ten. And my elder brother, who was with the Air force, used to encourage me a lot. After I finished elementary school in Zagir and Dekseb, I came to Biet Gergish and attending general examination. I was so ambitious that while attending 7th grade I was allowed to do 8th grade in the evening and got promoted to 9th grade and joined Kehas (Keih Bahri Secondary School) right away. I went to prison after I took part in a students’ demonstration. Then I returned to school and decided to be a pilot as I had high marks in high school to get admission to the pilot training program. So, I went to Debrezeyt, Ethiopia, to join the pilot training program and spent almost a month there. I was the only Eritrean and was expelled without any valid reason. With a friend’s advice I joined the Navy in 1973 and studied for four years.

After finishing school, I came back to my country and started to work as a cadet in Massawa while continuing my studies hoping to get a scholarship. My wish did not come true because of a coup d’état that toppled Haile Silassie’s regime. This and the feeling of nationalism urged me to join the armed struggle for independence. There I served as a commissioner and an instructor.

Initially the navy was mostly engaged in the transportation of weapons and other logistics, but with the liberation of North Eastern Sahl there was a need for the formation of a naval force. For that reason, all fighters that were very well experienced in the (Ethiopian) Navy had to be recalled, including me. I was assigned to the training unit and taught History, Maths, English and courses designed for marines. When rearrangements were made later, I was assigned as secretary to the late veteran fighter Alamin Mohamed Seid. When I was with the Navy I had health problems as I was asthmatic. It was very challenging as my health condition kept on getting worse but I continued serving in the Navy until Eritrea’s Independence.

In 1994, following the training of the first batch of cadets, my colleagues and I went to Greece to bring small patrolling boats to strengthen our naval force.

When my health condition got worse in 1996, I got reassigned to the Research Department in Beleza. A year later I went to the United States for medical treatment and came back home in 1998.

Even after all these years I still wanted to pursue my studies and with the help of my superiors I was able to join the university.

It was not that much difficult as I was very well acquainted with books and school life while I was teaching in the Navy. The Freshman program was a bit tough as we were obliged to take all the Freshman courses. But the following year became easier when the focus was on my major. I chose Archeology as my major and History as my minor.

Well, when I was in the Navy I was teaching Ancient Greece History, which included Archeology, and the places I went to such as America and Greece had a big impact on me in believing that “Archeology by itself is History.” History and archeology are very related, both tell stories of the past — history uses texts and archeology artifacts.

In college, we studied general geology, the study of the land and sedimentology. What got me to choose Archeology was my desire to build on what I knew instead of studying something totally new to me.

When I finished my studies in college, I was reassigned to the National Museum of Eritrea. As I got there, I was asked to bring ideas on the contemporary Eritrean history and I came up with what was always on my mind; conservation of the trenches from the battlefronts of the struggle for Eritrea’s independence. This led me to many opportunities such as “Africa 2009 Program”, a three-month intensive course in Kenya about the Conservation and Management of Immovable Heritage. When I came back I was assigned as Director of Archives and Technical services, which was a bit difficult and challenging because documenting history is not easy as it requires sufficient human resource, tools and organization to be able to gather information and archive it very well.

Then came projects such as Buia’s, which require field work mainly by geologists for ten days to a month. I loved going to the fields to understand what I had read in the books regarding geology that the researchers bring me every time they come to Eritrea.

In 2009, I attended UNESCO’s program in Italy regarding protection. Then in 2012, I took a three-month intensive course on Museology in Japan, which focused on management, documentation and conservation. I worked at the national museum up to 2017. And now with the formation of the new branch, I am heading the Archeology and Anthropology Research center at the Eritrean Commission of Culture and Sports.

Tools used by early human beings are found in many places, but in Buia there has been a discovery of the remains of human beings along with their tools and animals – both aquatic (crocodiles and different types of fish) and terrestrial (hippopotamuses, elephants and giraffes).

Our ancestors used to communicate through paintings on the wall. The nomadic lifestyle of the people brought the development of new technology such as agriculture and the formation of cities in historical places such as Keskese, Metera and Adulis. But all this was destroyed by manmade and natural disasters.

Our goal is not only to archive history but to pass it on to the next generations. An archive is nothing unless it is made accessible. Archeological sites should be visited by tourists. And for tourists to come and visit, there should be sufficient accommodation. The income generated through tourism could be used for conservation and for building the economy.

Overall, our history is yet to be discovered. But in any case if we don’t preserve what we have in our hands we will lose our identity. So to avoid this from happening we should promote tourism in our country.

I’m the kind of person who doesn’t want to miss any opportunity and when I get it I intend to meet resourceful people to learn from their experience. I’m always ready to ask questions. I never stop taking pictures and filming wherever I go because I believe what I see today won’t be there after a while. I love reading, studying and doing research. I am curious who intends to develop what he knows and does his best to be a conscious learner.

We, Eritreans, are endowed with archeological sites and other natural resources on the ground and in the sea. The young should understand that our nation will always get better than it is and for that to be realized they should work with devotion in every sector they are engaged in.