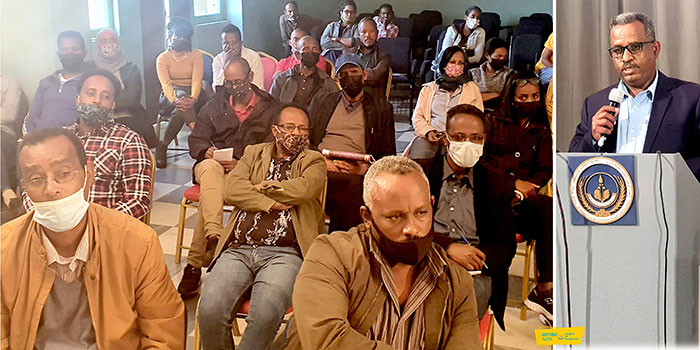 Asmara, 07 January 2022 – In an annual activity assessment meeting conducted on on 4 and 5 January the National Union of Eritrean Youth and Students assessed the progress of the implementation of 2021 programs and charted out new Strategic Work Plan.

In its meeting, the National Union of Eritrean Youth and Students stated that youth branches in schools and colleges exerted effective work in organizing awareness raising campaigns, seminars, and trainings.

In a concluding speech, the Chairman of the Union, Mr. Saleh Ahmedin indicated that the union has been charting out various strategic plans in order to fully implement its visions and objectives. Stating also that the new Strategic Work Plan is adopted in relation to the prevailing era, Mr. Saleh called on partners and the society for strong participation.

In a speech presented, the Head of the Political Affairs of the PFDJ, Mr. Yemane Gebreab indicated that reinforcing bilateral and regional relations with neighboring countries is one of the biggest programs of the 2022 and called on the NUEYS to prioritize and organize its programs in view of strengthening its relations with youth organizations in the Horn of Africa.

Highlighting on the priority of the development of human resources, Mr. Yemane also informed the union to implement its programs taking into consideration the reinforcement of participation and contribution of the youth in the Diaspora.