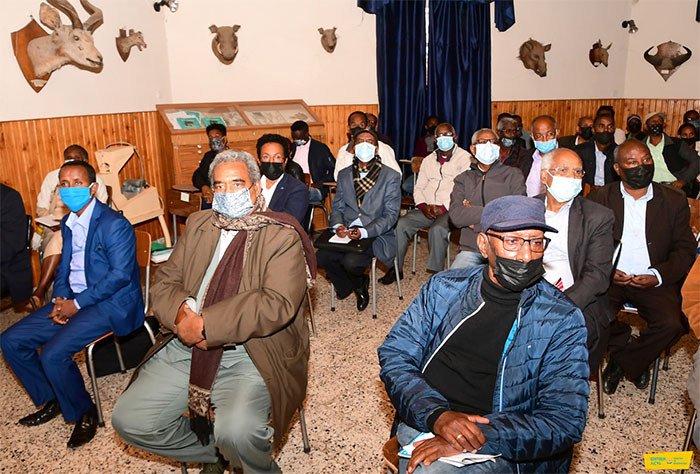 The Ministry of Agriculture (MoA) held an annual assessment meeting from 27 to 28 January 2022 at its headquarters in Asmara. Progress reports of the six regions, results of agricultural research and experiments, work done in soil and water conservation, development of irrigation systems, improvement of machinery-assisted farms, enhancement of laboratory experiments and regulatory services were extensively discussed at the meeting.

The development and promotion of bio-pesticides and bio-fertilizer by the Agricultural Extension Department are major achievements registered in agriculture. For instance, the Neem seed oil used as botanical pesticide has shown a remarkable result. The Agricultural Extension Department also made a remarkable progress in disease prevention and control. It was able to give vaccination against PPR to a total of 2,479,000 livestock and is making efforts to eradicate Rabies from Eritrea by 2030.

Pest surveillance activities were extensively carried out in a bid to control desert locust infested areas. As a result, 7,165 hectares of infested areas were treated successfully in Northern Red Sea (NRS) and Southern Red Sea (SRS) regions. Likewise, a total of 1,950 hectares of land infested by tree locusts was treated successfully in Tesenai and Golij sub-zones, Gash-Barka region. What is more, pests on citrus fruits were identified and successfully treated. Activities to control migratory pests were also successfully carried out in different regions of the country in 2021.

Eritrea hosted the 66th regular session of Desert Locust Control Organization for Eastern Africa (DLCO-EA) executive committee and Council of Ministers held on 4-8 October, 2021. The session, which was attended by delegates from all nine member countries, was a major achievement of the Agricultural Extension Department.

The annual report highlighted that Gulie masonry dam is boosting agricultural produce transforming irrigation systems. Ongoing efforts to enhance seed multiplication and distribution, dairy development, animal breeding and poultry activities, the construction of check dams and other types of terraces such as channel and bench terraces as part of soil and water conservation activities carried out across the country and the steady developments in agro-mechanization, the empowerment of regional laboratories were also discussed in the presentations.

The National Agricultural Research Institute (NARI) carried out various crop improvement works in Southern and Gash-Barka regions. An observation experiment held on local cherry tomato in Halhlale showed the variety to be resistant to early blight disease and yield 130 quintals per hectare. An observation trial on local chili pepper has also been carried out to identify a better species for multiplication.

The institute carries out numerous works in soil and water conservation. The introduction of lupine animal feed and its contribution in augmenting dairy and honey production were some of the other major achievements of NARI. NARI has been carrying out research activities in eight stations and substations of the agro ecological zones of Eritrea located in Halhale, Shambuko, Goluj, Hagaz, Aqordet, Shieb, Gahtelay, Afdeyu and Adi-Keieh.

The Regulatory Services Department, which has been working on awareness raising programs about food safety, has been monitoring small scale milk and meat products processing plants to ensure that customers get healthy products.

Registration and certification of bio-fertilizers is to be seen as a major achievement of the regulatory service. The Regulatory Service Department found 200 tons of compost produced by ‘Tsegana’ private enterprise in Gheshnashim, Central region, to be of desired standard and distributed it to farmers in the village organized under a project aimed at strengthening soil fertility through the empowerment of climate-smart communities. The department has also succeeded in controlling Illegal entry of animals and plants to the country.

An intense comparison was made to address the gaps between production and productivity. Tends of soil and water conservation on farm was viewed as a positive factor that needs to be reinforced in impacting farm activities. The impacts of field crop, horticulture, intensively managed dairy cattle in augmenting production, trend of forage production, poultry, bee keeping and its impact in honey production were also discussed.

The annual report was different from reports in the past. The presenters and moderators were all young men and women agronomists, a sign of the transfer of responsibility from veterans and the empowerment of young professionals carried out at the MoA.

In his closing speech at the end of the two-day session, Mr. Arefaine Berhe, Minister of Agriculture, expressed his appreciation to the presenters and commended senior heads of departments and units for the encouragement they forwarded to their subordinates. Mr. Arefaine noted that the engagement of the youth workers is quite imperative in the transfer of skill as well as in building excellence.

Mr. Arefaine stressed that farmers should be encouraged to store ample amount of animal feed in times of plenty as a backup plan to be used during dry seasons. “The major focus needs to be directed towards productivity. Once productivity is ensured it will definitely impact agricultural produce of any sort,” he added.

Mr. Arefaine said most of the agricultural activities carried out until 2013 aimed at ensuring food security, and the focus shifted in 2014 towards ensuring nutrition security.

Mr. Arefaine said that the import of dairy products stopped with the opening of some small scale enterprises specializing in milk and other dairy products. This achievement was part and parcel of the efforts being made to provide nutritious food to the general public. As the dairy products are still not affordable for many, Minimal Integrated Household Agricultural Package (MIHAP) needs to be promoted further as a perfect tool towards ensuring nutrition security, Mr. Arefaine said. “Sweet potato should be extensively cultivated by farmers to impact the efforts being exerted in ensuring nutrition security.” 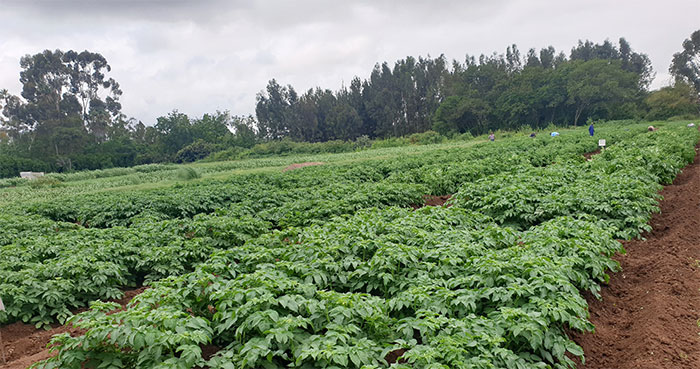 In terms of human resource development, Mr. Arefaine said the primary objectives of opening Halemlalo Agricultural College was to train professionals and provide skilled workers for small scale private enterprises of dairy products and to enable the graduates to transform the farm practices into advanced agriculture.

Indicating that the cultivation of date palms through the development of tissue culture and other mechanisms has been showing remarkable progress, Mr. Arefaine finally said that a strategic plan that serves until 2026 has been mapped out to plant around 200,000 date palm trees in the NRS and SRS regions as well as hot places in Gash-Barka, Anseba and Southern regions.