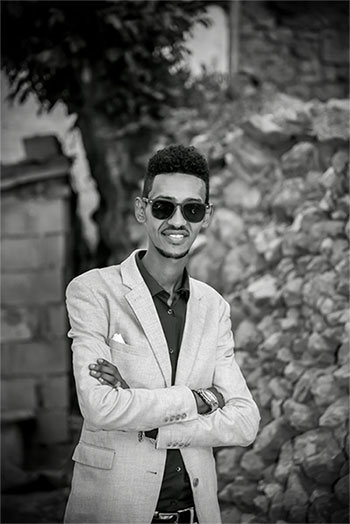 Born in 1993, Mussie Mekonen, better known by his nickname, Chine, got introduced to music just right when he started talking as a child. By the time he got to be a 4th grader, little Chinez started to play musical instruments. He was inspired by his musician parents, both freedom fighters, knew his ways around studios and got a four-year music lessons starting from the 8th grade. After he graduated from the music school he went to Sawa. Since 2009, he has produced music for almost all Eritrean artists, whose songs have become famous and gone viral, earning the singers a good name here and abroad. After all those years of staying in the studio, he finds it hard to know how many works he has produced over the years.

I came from musician parents, both freedom fighters. My dad worked at the Cultural Affairs music and light system. My mom was a singer with the cultural troupes during the armed struggle for independence. 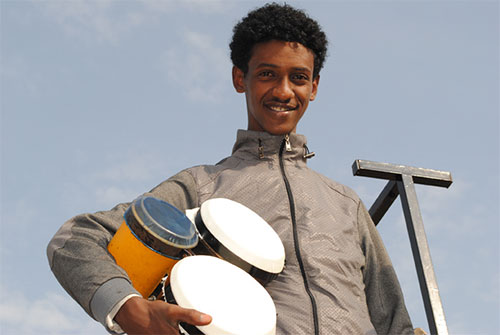 An interest in music came naturally to me as I grew up watching my dad work with various musical instruments. Everything was easy for me since I had all the opportunities and musical instruments around me. When I was in 4th grade, I learned the Sudanese drum that is played by holding between the legs, the Derebuka drum. This is one of the instruments I learned to play first.

Sibrit Cultural Troupe, one of the elite cultural troupes in the country, trained at a cinema in our neighborhood. As kids, we used to watch them rehears during the day and in the evening we gathered around and imitated their beats and everything else using instruments we made out of tins. We played and practiced by ourselves for quite some time, and before long I got into a studio along with some of my friends who were selected out of our school and had proper training. We were the students who had skills to play the drum. I was a bit better than the others and was the one supervising. We had a successful concert at Bahti Meskerem in 2004.

I was a member of our school’s music group, and I decided to get proper music lessons from Asmara Music School. I started my music lessons when I was in 8th grade and went to Sawa, the 25th round, after graduating from the music school where I had been for four years. I specialized in playing the piano, and during my spare time, I continued to learn to play the drum; and I did well on both. Later on, after my journey to Sawa, I became a member of Sawa Musical Troupe and continued my membership during my stay there. Although I Started out as a pianist, I started playing the bass guitar as there was no one to play it. So, I came back to Asmara having learned to play the bass guitar pretty well. 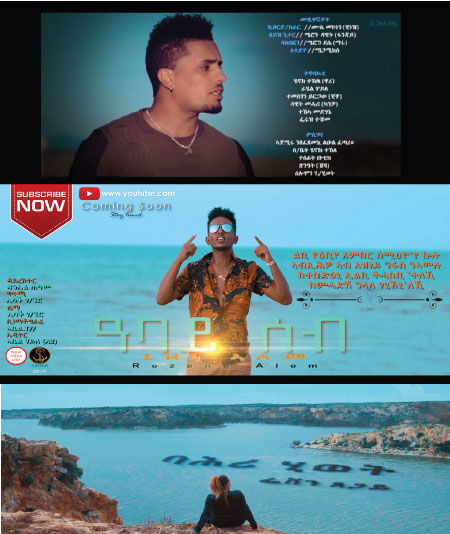 As a composer, the first thing one should do is ‘know the lyrics.’ What is it saying? What kind of emotions does one wish to convey? How do you get the public to feel what the writer is feeling? I believe team work is essential for a great music to be produced. Our elderly musicians used to discuss and share ideas, and I believe that is one of the main reasons their music is still popular and recognized by the public, even many years after they were produced. Music is vast; there are a lot of things we can experiment with using our resources. But if one plans to do it alone it is just going to remain a work of a single mind, with a single perspective. I cannot stress this enough — working together makes us brighter and sharper. That is the only way we all can get to the top of whatever goal we set for ourselves.

Over the years I have spent my days at the studios, which is every day of my life since I was very young. I have worked with almost every Eritrean artist here and abroad. But I honestly can’t keep track of the number of music I have produced for them, but it is definitely more than 700. Fortunately, my works have been accepted by the public so greatly and have added fame to the artists.

Yatana Cultural Troupe was the Ministry of Education’s Musical group. Later, in 2012, the group became Boba Musical Group, and had many great young artists. What made the band unique was all its musical instruments were traditional. We tried to show the world that our traditional musical instruments can be used to play modern styles of music: Eritrean modernized music, African music, jazz, Arab beats, etc. We can play it all with our instruments. That was our main goal. Our band grew to be famous and had many concerts that earned us a great deal of appreciation from the public. We were even invited to the President’s office to perform.

Representing the Central region, our band participated in competitions at the National Festivals. In many of the competitions we have won first place for years. I regret to say that due to many challenges, Boba band couldn’t go on. However, I have seen at least three bands that want to follow in the kind of path our band followed. Hopefully, attention would be given to such troupes because we have all the resources to go global and introduce our tradition, traditional music and culture and everything that goes with it.

Like I said, all artists are driven by the same goal. We all want to bring out the best artistic work. I hope we all can agree to come together and work hard for the common cause, taking the music industry to a greater level. For that to happen, we need to be a team. We shouldn’t waste our time competing against one another; we all need to compete for the bigger picture.