In an effort to control and prevent the dire consequences of major deadly animal diseases, the MoA administered a total of 3.5 million vaccinations against PPR, anthrax, brucellosis, Foot and Mouth Disease (FMD), Lumpy Skin Disease, Newcastle, Rabies, and other tropical diseases.

As part of the long term plan to control and eradicate major animal diseases, the MoA mapped out a national strategic plan for the eradication of Pestes Despetites Ruminants (PPR) and Rabies by 2030. In line with the ongoing efforts to control vaccine-controlled diseases, a total of 2.4 million livestock have been vaccinated against PPR, and vaccination against Rabies has been regularly given across the country. 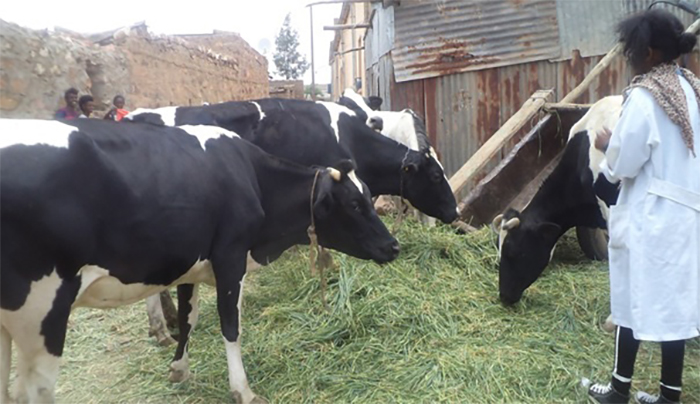 Dr. Yonas Weldu, director of the Animal and Plant Health Department at the MoA, said that vaccination services have been implemented in phases, and efforts are being made to ensure the country’s strategic plan corresponds with the global goal. Eritrea’s experience shows that vaccination against rabies has been given to shepherd dogs along with regular PPR and other livestock vaccines. Giving vaccination for rabies is not confined to clinics. The MoA encourages farmers to bring their dogs for vaccination against rabies when they bring their livestock for vaccination.

The regular veterinary services that have been offered against major livestock diseases and the deworming and other clinical services across the nation have been remarkably helping in increasing meat and dairy production. Dr. Yonas said that there has been no major outbreak of any endemic animal disease since 2003 owing to the integrated compulsory and free vaccination services that have been carried out in the last 20 years in all regions of the country.

In line with efforts that have been made to control and eradicate major animal diseases, the MoA has been promoting laboratory experiments. The extensive research undertakings have now given results and vaccines have been locally produced. Dr. Yonas revealed that trials have been carried out and samples have been produced for PPR and Newcastle vaccines and mass production of these vaccines will soon start. The production of vaccines for these deadly diseases will have a positive impact in increasing livestock and poultry.

Integrated pests management and surveillance of crop and vegetable diseases have also been regularly carried out to control major endemic insects.

Eritrea strictly adheres to prevention, and major activities are centered on preventing animal or plant diseases by making use of available resources before an outbreak. Its major achievements in the production of bio-pesticides include the production of pesticides by extracting material from plants such as Neem seed, chillily pepper, and Aloe Vera.

According to Dr. Yonas, field trials carried out to test the effectiveness of the locally produced bio-pesticides have been encouraging, and their production will be increased for use in all regions. The primary objective of producing bio-pesticides is to get rid of the side effects of conventional medicines on soil, plant-animal, and human health and to deal with environmental hazards.

There is no doubt that ensuring plant and animal health is ensuring human health. The MoA works to address major contagious diseases in partnership with the MoH. Dr. Yonas said that vaccination against brucellosis has been given in the country since 2020 to prevent and control zoonotic diseases from the main sources. Such an intervention has been done jointly with the cooperation of the ministries of Agriculture and Health.

Bio-security is also one of the main concerns of human health. As part of bio-security measures, sanitation works on potato stores have been carried out to ensure that potato seeds are free from infestation. After they were checked for any disease, select potato seeds have been distributed to farmers. What is more, potato, which commonly grows in highlands, has been cultivated in lowlands as well. Farmers in the lowlands have been encouraged to introduce potatoes in their farms with the support of the MoA.

Members of the MoA are always ready to respond to any alarming situation. As a result, the timely reactions against migratory pests have been effective owing to the regular surveillance activities.

Migratory pest control in targeted areas of Northern Red Sea and Southern Red Sea regions as well as Gash-Barka region was carried out, resulting in an action against an outbreak of desert locusts. A steering committee with membership from various government bodies was established to immediately respond to alarming situations.

Training and sensitization programs were given in plant and animal health, and capacity-building programs for agronomists and farmers have been given.

Vaccination programs, the production of bio-pesticides as well as the local production of vaccines have been making a difference in upgrading the economic capacity of farmers.

Cleaning facilities for sprayers have also been set in all sites to get rid of contamination that may occur in moving sprayers around from one part to another part of the country. This intervention aims at controlling environmental hazards that may be caused by pesticides.

Peaceful Coexistence and Mutual Respect as Principles of Human Rights: A Lesson from Eritrea