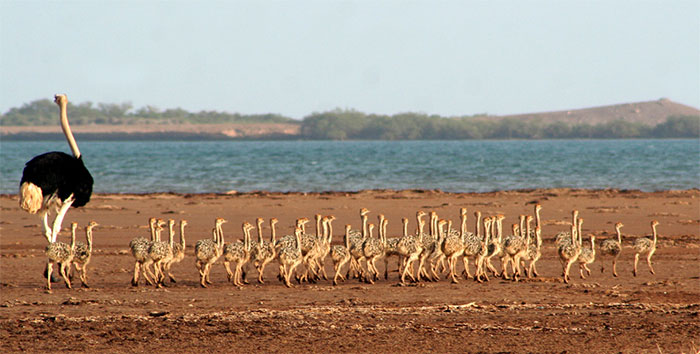 World Wildlife Day has been declared to celebrate the beautiful and varied forms of wild fauna and flora and to raise people’s awareness of the benefits of their conservation. It also reminds us of the urgent need to step up efforts to protect wildlife against criminals and human-induced reduction of species, which have wide-ranging economic, environmental and social impacts.

The Earth is home to countless species, too many to even attempt counting, of fauna and flora. Historically, we have depended on the constant interplay and interlinkages between all elements of the biosphere for all our needs: the air we breathe, the food we eat, the energy we use, and the materials we need for all purposes.

International days are occasions to educate the public on issues of concern, mobilize political will and resources to address global problems, and celebrate and reinforce the achievements of humanity. In view of this, assessing the status of wildlife in Eritrea on the occasion of World Wildlife Day is imperative.

Globally, managing wildlife and its habitat involves people and organizations in a range of ways. History reveals that in Africa ever since the existence of humans, conservation of natural resources was considered part of their culture. In those days there was no overexploitation of the natural resources of the environment. They practiced subsistence farming, and people only took what they could consume. Hence, Africans coexisted with their ecosystem in harmony for centuries without destroying their environment.

However, with the era of colonization and industrialization, things started to change. The natural ecosystem that had existed began to take a new shape and much of Africa’s forests and wildlife began to be destroyed for different purposes. Overexploitation of the environment and natural resources jeopardized biodiversity. Consequently, the sense of ownership and conservation was lost. Hence, a lot of wild animals were killed and poaching became a common phenomenon. Nowadays, the illegal appropriation of wildlife is moving at an alarming rate and conservationists believe that unless mitigation measures are taken, nearly a quarter of all the species are likely to become extinct in the coming decades.

Wildlife in Eritrea was not exceptional to the fate of wildlife in other countries of Africa. Similar disasters were seen in Eritrea during the colonial era and the war of independence. In pre-colonial Eritrea, 30% of the land was covered with forest and there were many wild animals. Upon independence, which came after colonization and successive wars, forestation was reduced to below 2%. As a consequence of this, the overall number and species of wild animals in Eritrea has diminished significantly. And some disappeared altogether. Deforestation was intensified and a number of precious wildlife species became extinct. These include Rhinoceros, Giraffe, Hippopotamus and Gravy Zebra while other remaining wildlife species were at the brink of extinction when Eritrea gained its independence.

Nonetheless, after Eritrea’s independence and the subsequent peace, security and stability in the country, the government and people of Eritrea have given due attention to the conservation of wildlife.

To reverse the adverse environmental situation and eventually recover the status of wildlife, relentless endeavors continue to be made and promising achievements have been attained. The commitment of the government to promote conservation is demonstrated through its public awareness campaigns and capacity building and institutional arrangements for the conservation of wildlife. The intervention has shown promising results in the variety of species, their distribution and the population of wildlife. A report from Forestry and Wildlife Authority shows that the number of wildlife in Eritrea is increasing significantly. The revival of globally endangered species of wildlife (IUCN Red lists) such as African Elephant (Loxodonta africana), African Wild Ass (Equus Africanus), Nubian Ibex (Capra ibex nubiana) and Eritrean Gazelle (Eudorcas tilonura) in the soil of Eritrea is evident.

The theme for this year’s World Wildlife Day, which is celebrated on 3 March, is ‘Safeguarding Key Species for Ecosystem Restoration.’

The Government and people of Eritrea work to restore degraded ecosystems and promote the recovery of wildlife, in general, and endangered and vulnerable species, in particular. We should remember that we are holding biodiversity in trust, and we, therefore, have the moral obligation to ensure the continued existence of wildlife that we should pass on to future generations.

Nationals in Italy contribute over a quarter of million Euros