By Ted Papenfuss, Museum of Vertebrate Zoology, University of California at Berkeley

The African savanna elephant is the world’s largest land animal. Adult elephants weigh up to 7,500 kilograms and stand almost four meters tall at the shoulder. The savanna elephant is one of three living elephant species. The African forest elephant is a smaller species in West and Central Africa. A third elephant species, the Asian elephant, lives in South and Southeast Asia. Around 100 years ago, there were over 5 million elephants in Africa. However, due to habitat loss and killing for the ivory tusks, there were only 1.3 million African elephants in 1989. A survey in 2015 by the NGO, Elephants Without Borders, estimated that less than 400,000 elephants remained in Africa.

Fortunately, two international organizations now provide some protection for African elephants. The International Union for the Conservation of Nature (IUCN) Red List of Threatened Species lists the African forest elephant as Critically Endangered and the Africa savannah elephant as Endangered. In addition, the Convention on International Trade in Endangered Species of Wild Fauna and Flora (CITES) bans most international trade in elephant tusk ivory, however illegal killing of elephants and smuggling their ivory tusks out of Africa to Europe, North America, and Asia still occurs. Elephant Protection Initiative. 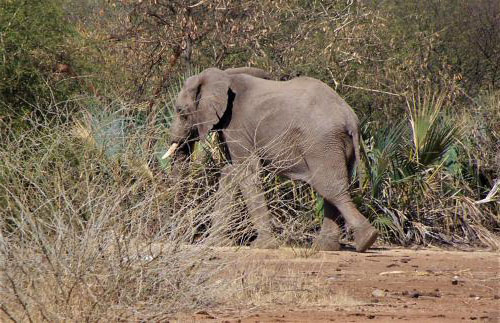 The Elephant Protection Initiative (EPI) is a group of 21 African nations that collaborate in elephant protection methods and promote the harmonious coexistence of humans and elephants to reduce human-elephant conflict. The EPI was founded in 2015 by the leaders of Botswana, Chad, Ethiopia, Gabon, and Tanzania. Eritrea joined the EPI in 2019. In many parts of Africa, humans and elephants compete for the same resources. Drought, climate change, and habitat loss may force elephants to enter rural farms and villages searching for crops to eat and water to drink from wells and ponds. An adult savanna elephant can eat 300 kilograms of food a day, and some farmers will kill elephants to prevent crop loss. 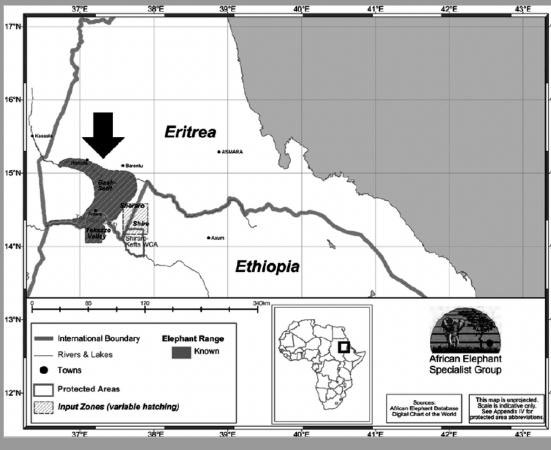 In November 2020, the EPI started a new focus on preventing and mitigating human-elephant conflict. This focus is named Vision 2030. The goals of Vision 2030 are: “Harmonious coexistence of people and elephants with herds able to travel across their range. Thereby protecting a diverse range of wild animals and plants, combating climate change, and supporting local livelihoods”.

Tekeste Kiflemariam is the Head of Forestry and Wildlife Authority in Gash Barka region. He and his staff at the Barentu office are responsible for protecting and managing the elephants that live in southwestern Gash Baka in and around the Gash-Setit Elephant Sanctuary. When I visited Barentu in 2018, Tekeste showed me the large tree nursery where thousands of seedlings are cultivated every year for reforestation projects in the region. We also went to the Setit River to look for elephants, but unfortunately, on the day of our visit, the elephants were out of sight somewhere in the forest on the opposite side of the river. 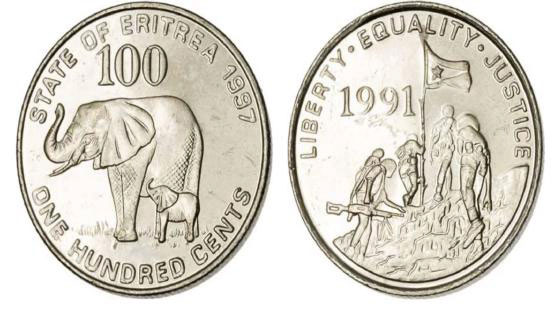 Last year Tekeste was featured as “July Friend of the Month” by the EPI Foundation. He was honored for his work over the last 15 years to mitigate the human-elephant conflict, a problem in Eritrea and throughout Africa and Asia. At independence in 1993, there may have been as few as 20 elephants in Eritrea. Now with habitat improvement by planting trees and outreach to local human populations to reduce human-elephant conflict with projects like construction of dams and ponds to discourage the elephants from using farmer’s wells for water during the dry season, the elephant population is increasing every year. There are now around 200 elephants in Eritrea. Since independence, wildlife protection has been a national policy. In 1997 the State of Eritrea issued a set of coins showing some animal species that live in Eritrea. An adult female and a young African savanna elephant are shown on the 100 cent coin. Savanna elephants live in social groups of related females and their calves. The oldest female, the matriarch, leads each group. Adult males only associate with the herds during mating. Fossil elephant from Eritrea. 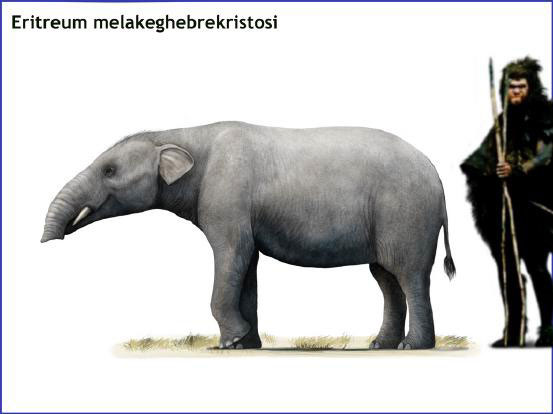 The State of Eritrea and an Eritrean farmer were honored when a new fossil species elephant was described in a scientific publication. In 1997 the farmer found fossil jawbones in Wedweg Melatse Farm at Dogali, a town near Massawa. Mr. Melake Ghebrekristos, the farmer who discovered the fossil jawbones, realized the importance of the fossils, and he took them to the Department of Biology at the University of Asmara. An international team of scientists studied the fossils, including Eritrean scientists from the Eritrean Geological Survey, the National Museum of Eritrea, and the University of Asmara. The group described the fossil in 2006 as a “missing link” between ancient fossil elephant relatives and modern elephants. They estimate that the fossil is about 27 million years old. The description was published in the journal, Proceedings of the National Academy of Sciences (PNAS). This interesting article includes illustrations of the fossil jawbones and restoration of how the ancient elephants may have looked. The PNAS article is available free of charge at this link.

The authors explain how they chose the scientific name for the fossil elephant in the article. “Eritreum from the name of the new nation of Eritrea in the Horn of Africa, and melakeghebrekristosi in honor of the farmer, Melake Ghebrekristos, who found the fossil jawbones in 1997.” PNAS November 14, 2006. The fossil species of pre-elephant is estimated to be only about 1.5 meters tall and have a weight of fewer than 500 kilograms.