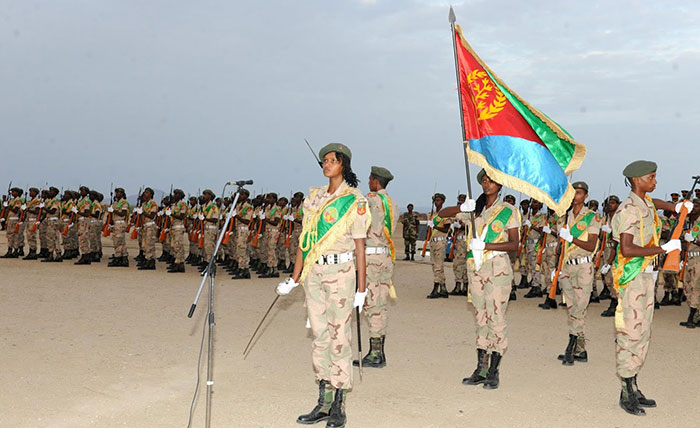 The story of Eritrean women, who participated in the armed struggle for national liberation and social justice, is being documented and told by nationals and foreigners although it is not exhaustive. Eritrean women freedom fighters have made many sacrifices for the liberation and transformation of the country. They know no limit on the amount of sacrifice. They never hesitated to sacrifice their reproductive time, their body parts, their opportunities, and their life. They participated in the national liberation struggle with enthusiasm and made up about 30-35 per cent of the liberation army.

During the struggle for independence, the EPLF strongly believed that a revolution could not triumph without the conscious participation of women and was guided by the principle of “emancipation through equal participation in the struggle.” These ideals brought about a fundamental transformation in the outcome of the struggle and in the social structure of the society.

The EPLF had a firm belief that the social emancipation of women could not be seen separately from the question of the emancipation of the entire society. For this reason, since its establishment, it has given great emphasis to the participation of women in the national democratic revolution. This is reflected in the documents of the Front, including the 1971 manifesto Nhnan Elamanan (we and our objectives) and declarations of the front’s first and second congress held in 1977 and 1987 respectively. One of the objectives of the National Democatic Program that was issued in 1977 was to “destroy the bad aspects of the culture and traditions of Eritrean society and develop its good and progressive content.”

The dedication and sacrifice by Eritrean heroines was fundamental to the success of the political and social liberation in Eritrea. The momentum and direction of the struggle was to a large extent determined by the self-confidence, determination, heroism and sacrifice of female fighters in the field and in the clandestine organizations within the territory occupied by the enemy. Eritrea’s long and bitter struggle for independence would not have succeeded without the active and exemplary contribution of women.

As a tribute to the heroines of the Eritrean revolution on the occasion of International Women’s Day, I would like to focus on “the other war” which the freedom fighters (tegadelti) had to deal with. Despite their young age, Eritrean freedom fighters were willing to sacrifice or forego self-interest and emotional desire to promote the objectives of the struggle. For the moment I am delighted to share a love story of two tegadelti which I found in a booklet called mahfuda tarik (purse of history) that showed the love, sacrifice, fortitude and perseverance of a mother, fighter and lover.

It is the story of Alganesh Tekeste, who initially joined the Eritrean Liberation Front (ELF) in 1977. When the ELF ceased to exist in 1981, she joined the EPLF and continued her struggle until Eritrea’s liberation in 1991. Alganesh, who rose to the position of commissar of a unit while in the EPLF, fell in love and married Bereket, her brother-in-arms. After the glorious victory of Operation Fenkil, she became pregnant in 1990 while she was at the Gindae front. She was then sent to the rear area in Nakfa. She wrote a two-page letter dated April 2, 1991 to her husband whom she thought was fighting a battle in the Danakil. By the time she wrote the letter, she had given birth to a baby boy who was then three months old. Here is a rough translation of her letter.

To whom I miss and love heartily, my love:

First of all, I would like to extend my revolutionary greeting to you, my love, and I am confident that the letter will reach you. Bereket, my brother, how are you? Above all, your health!

I am extremely good at handling the newly born baby, fruit of our love.

Bereket, how are you? How are you doing in the war at the Danakil? How are you managing the hot environment, the thirst, fatigue and all the perils in general? A person in love is always restless and I am thinking about you all the time. I am thinking about whether you are alive or not and am losing my mind over the news I could hear. I am separated only physically from you. Spiritually, I am always fighting on your side in all the battles you have taken part.

For your surprise, but you should not laugh at me, when news of war comes, I close my ears and play deaf in order not to listen to some bad news about you.

Eternal remembrance to our martyrs Victory to the masses! 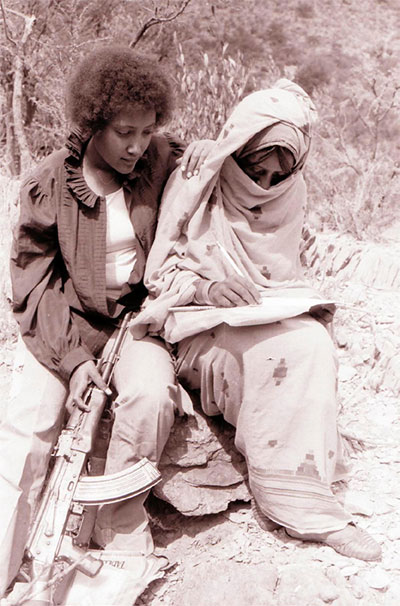 Alganesh drew her palm in the middle of the love letter to express her love for her husband which she thought was fighting at the Danakil front. In the simply drawn palm of her hand she wrote “selam selam for you, my precious love. My fingers that were hidden from you for so long are coming to the Danakil; accept them.” At the bottom she wrote an important message, big good news, that she felt would fill the heart of her husband with joy. She wrote “Temesgen, the fruit of us” to inform her husband about their newly born baby.

By the time Alganesh wrote the letter Bereket had already become a martyr. He died in April 1991 at Rama, Tigray, fighting against the Derg army redeployed in Tigray to attack the TPLF.

Although both Eritrean men and women made a lot of sacrifices for Eritrea’s liberation, the liberation struggle took a larger toll on women. A great number of women fighters devoted their reproductive age to the struggle and have been left without a child, and many more still suffer due to the severe injury sustained in combat.

The emotional sacrifice paid by Eritrean women fighters exceeds that of the physical sacrifice. Many fighters joined the struggle by giving up educational, marriage and business opportunities. The tremendous sacrifice made by the heroines continues to this day to serve as reference and inspiration to young generation.

Only a handful of women joined the nascent EPLF in 1973, some two years after its establishment. But their number increased phenomenally in the following year and thereafter until women made up a third of the EPLF’s fighting force.

Today, thanks to the boldness of the women revolutionaries and their readiness to make multiple sacrifices, Eritrea has become a country where gender equality is respected and national unity is maintained. The martyred and veteran heroines of Eritrea have taught the previously male- dominated Eritrean society about the rightful position of women. They had fought on the frontline, driven tracks, repaired vehicles, commanded army units, participated in campaigns to educate the public and done all sorts of things usually considered `masculine.’ The Eritrean revolution produced many thousands of heroines that fought bravely for the liberation and emancipation of the Eritrean society.