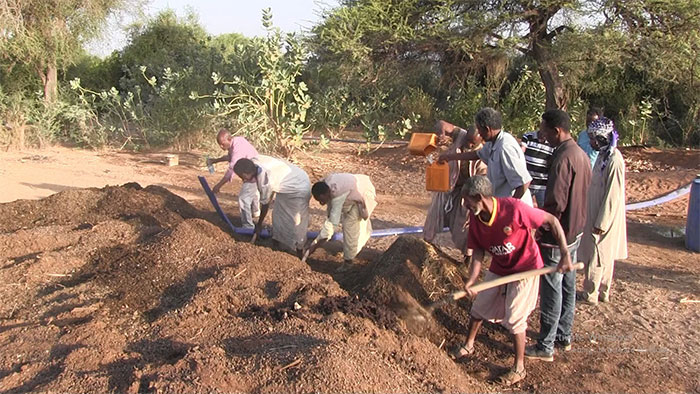 In February 2021, the MoA and the Ministry of Marine Resources (MMR) jointly started a new initiative to use agricultural and marine residues as sources of solid and liquid fertilizers as well as bio-pesticides. The objective of the initiative was to contribute to producing safe and nutritious food through environment-friendly, socially acceptable, and economically feasible agricultural production practices.

To reinforce the endeavors, a technical committee that comprised bio-fertilizer production sub-committee and bio-pesticides sub-committee was established. Members of the committee include experts from the MoA and MMR, Eritrean Institute of Technology and the private sector. The committee has extended its membership up to the sub-regional level and contributed a lot in improving awareness of regional experts and farmers.

In the first stage, the committee has produced a considerable amount of fish amino acid (FAA), seaweed extract (SWE) and neem-pepper-aloe extract and delivered them to several progressive farmers for trials. Later, it accomplished a successful scheme to shorten the decomposition of plant and animal materials in the process of compost and liquid fertilizer production. In addition, the committee has carried out a number of training of trainers (ToT) programs to agricultural experts in all the regions.

As a continuation of its efforts to promote bio-fertilizers and bio-pesticides, the MoA conducted this month a one-week practical training to 30 farmers at Homib and Waekayt in Forto-Sawa Sub-zone of the Gash-Barka region.

According to Mr. Yosief Tewelde, head of the Compost Production Sub-committee, the training was given in response to a demand by representatives of farmers in Forto-Sawa sub-region.

Since the ultimate goal of the MoA is to convince farmers to use bio-fertilizers and bio-pesticides, their demand was most welcome, Mr. Yosief underscored.

“We have organized, for them, three types of training with regards to the production of solid and liquid fertilizers as well as bio-pesticides,” he added.

Mr. Yosief explained further that many farmers have been using compost produced by putting plant materials and livestock droppings in pits. However, they are now being acquainted with different varieties of natural fertilizers that are processed both in solid and liquid forms, he added. Finally, he said that it is good for farmers to know that there are a number of techniques to produce natural fertilizers and urged them to consult agricultural experts in their district.

Ms. Adiam Rezene, one of the trainers who was in charge of speeding-up the decomposition process in compost production, was able to reduce the time needed to produce compost from three months to three weeks.

She said that the experience she acquired from her training in Japan helped her to speed up the decomposition of organic materials to produce viable compost just in three weeks.

According to Ms. Adiam, the main concern of farmers has been the long time that took to produce compost. To address this issue, the MoA has been empowering experts in all the regions with techniques of shortening the time of decomposition in the compost production process using microorganisms.

Finally, Ms. Adiam commended farmers of Homib and Waekayt for their earnest demand and participation in the training program, and urged other farmers in the country to follow in their footsteps and adopt the initiative.

Participants of the training program said that the sessions were practical and important. Mr. Ebe Hadish is a farmer who lives in Homib, Forto-Sawa sub-region. He said that the MoA’s initiative was very important in increasing their awareness about using organic pesticides. He also said that it gave him great satisfaction to be able to use organic materials from their farms to produce solid and liquid fertilizers.

Mr. Osman Idris Yakob is also a farmer who came from Waekayt administrative area of Forto-sawa sub-region. He said that since some years ago he has been preparing compost and found it helpful in boosting his harvest. “However, this training has helped us to prepare compost in a very short period of time,” he added, and confirmed that they will adopt the scheme and influence other farmers in their surroundings.

Mr. Habtemichael Tsegay, a farmer from Homib-Abagosh area, was also one of the beneficiaries of the training program. He said it was his first time to participate in such an important program, and was convinced that using bio-fertilizers and bio-pesticides will help them produce healthy agricultural produce and safeguard their land from contamination by chemical fertilizers and pesticides.

Since the production of bio-fertilizers and bio-pesticides is somehow a new technique to Eritrean farmers and experts, continuous on-the-job training will be carried out, the MoA asserted.

Use of natural fertilizers and pesticides

A Glimpse into the Prehistory of the Western Lowlands of Eritrea