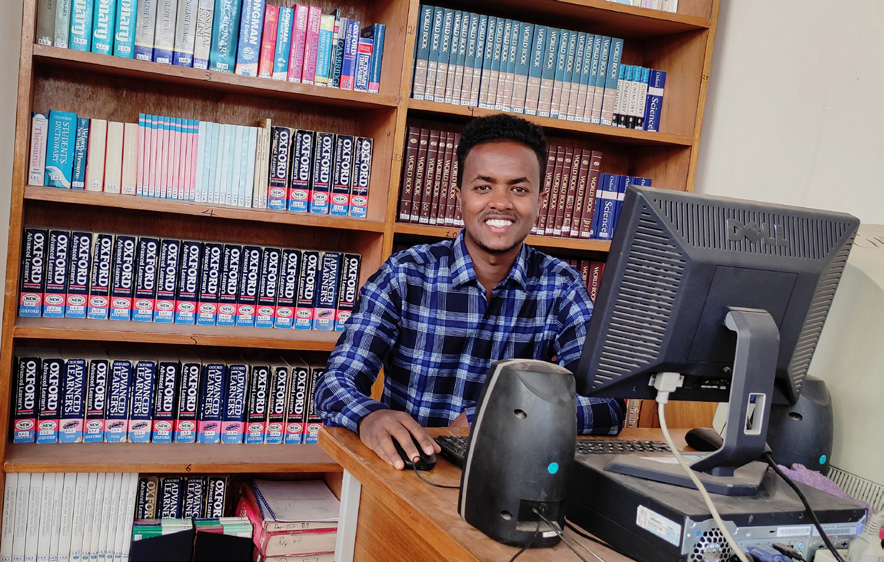 Abraham and his team are young innovators whose creations are useful to people of all ages who are familiar with the digital world. Their latest app will help Tigrinya speakers translate with ease whatever they want into English and vice versa.

Thank you for your time. Please, introduce yourself?

Thank you. My name is Abraham Yacob and I am teacher. I did elementary and junior high at Awet Elementary and JuniorSecondary School and then went to Semaetat High School. I went to Sawa for my national service and sat for the matriculation exam. I scored the required grade and joined the Institute of Technology at Mainefhi. I studied computer science there. After completing my studies, I was assigned to work as a teacher at vocational training center in Sawa. I worked for three years there. Now I am working at Sembel Secondary School as an IT teacher.

What led you to study computer science?

I think it all began when I was a kid. My father bought a desktop and all members of our family, especially my siblings, were trying to learn to use it every day. Obviously, I was influenced and drawn to their new habit. Since then I have been devoting much of my time learning and mastering the computer. So, the passion that was born during my childhood led me to study computer science. Besides teaching computer application, I’ve started creating and designing apps. 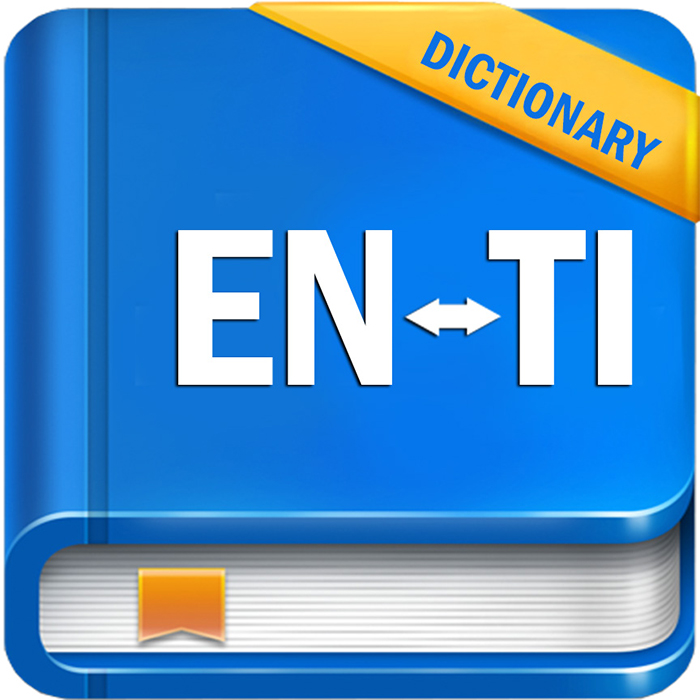 What have you created so far?

My biggest project so far has been RORA digital Library, which is used in almost every school. I have also created inventory softwares for many stores and database systems for several schools. My second big project is to upgrade an app called Advanced English Tigrinya dictionary. This second version has features that could easily put it in the ranks Merriam Webster’ app. My assistants, Haileslasie Yaccob, Menasie Semere and Semere Sirak, have been able to include eleven features that are not found in the first version.

Tell us more about the app itself and its new features?

The app was created in 2014. The lexicographers are Tekie Tesfay, an author, and Hdri Publishers.  The programmer for the apps is Fitsum Embaye. The app was originally capable only of translating from English to Tigrinya. However, the new version has a special feature for translation words from English to Tigrinya and vice versa and has over 144,000 entries from Tigrinya and over 62,000 entries from English words. It has a pronunciation guide and indicates the part of speech a word belongs to. It also has a speech recognition system which enables users to find English equivalents for Tigrinya words they produce orally and can convert written English texts to speech. What was difficult for many users in the first version was searching words they could not spell. We have modified the app to start searching a text after the first few letters in a word are entered, all it needs is a hint.

Although these days most phones may have Ge’ez keypad, there are others that don’t. So, to make it easy for users to use our app, we embedded Ge’ez keyboard into the app. We wanted friends to interact with each other, so we installed a program that guides you to share words. Also, users can save words in the category ‘Favorites.’ Our intention is to serve all age groups. We have provided our users with a setting to modify font size to be able to read without difficulty. Though we wanted to create something that helps people, we feel people who have worked so hard to create the app should get financial benefit. For this reason, we have encrypted it, and so unless you buy the app you cannot share it. We believe we are the first to accomplish this kind of encryption in Eritrea. 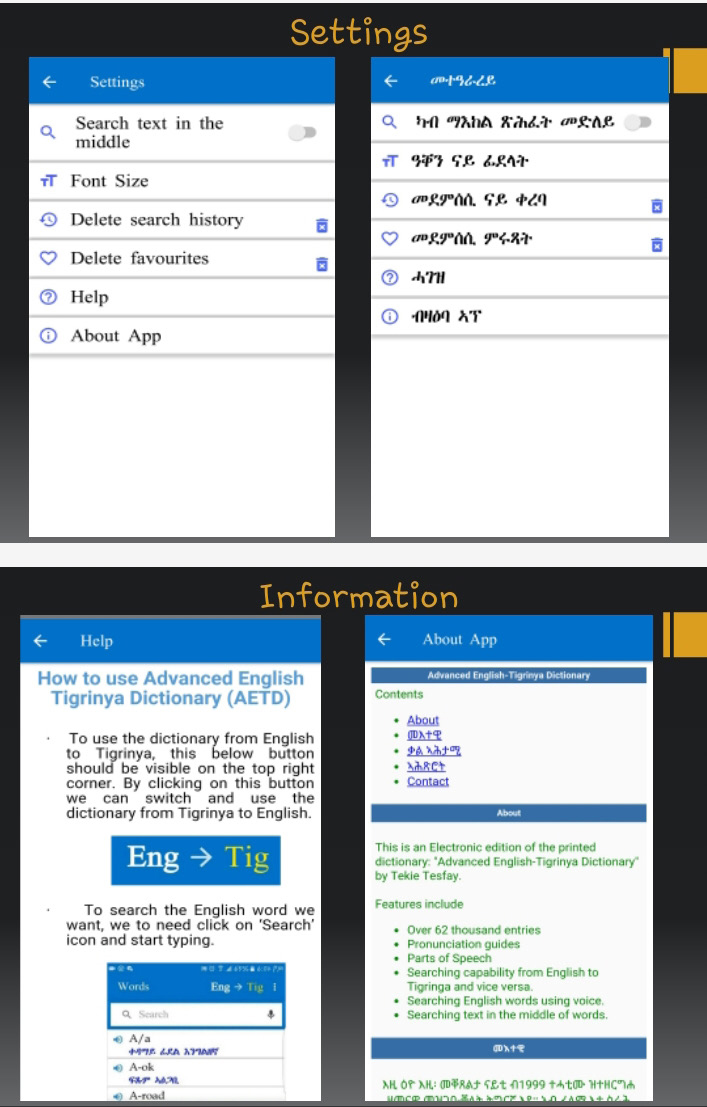 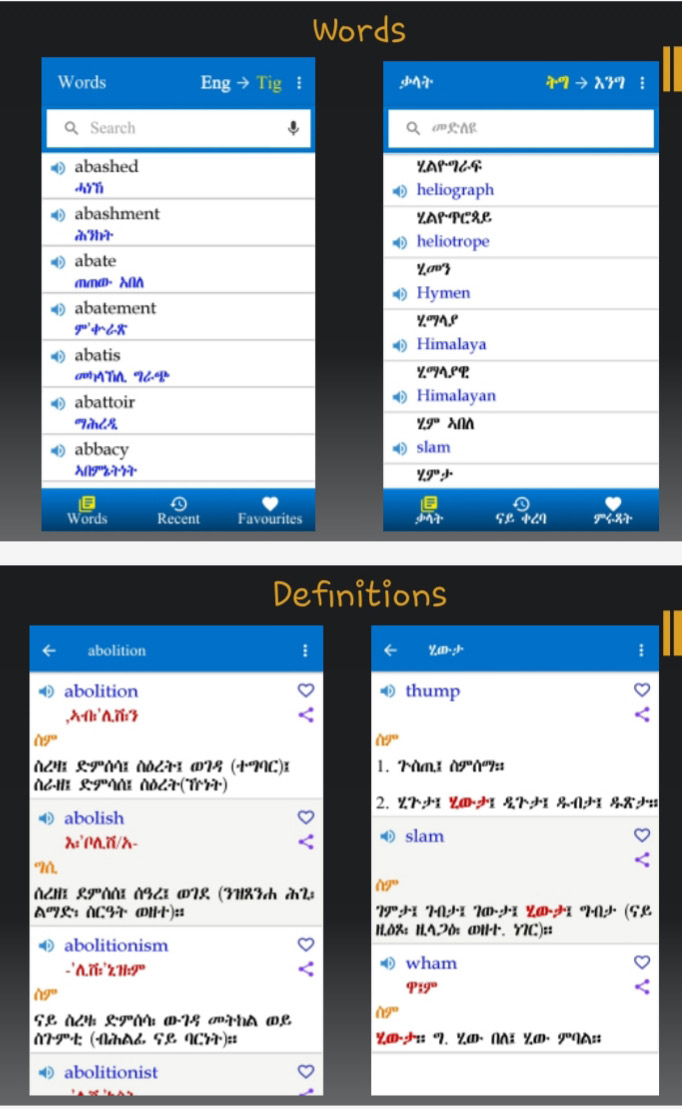 Where could users buy your app?

We haven’t started distributing it, but we are thinking about making it available at schools, music shops and movie stores where users usually buy apps from. We believe our price will be fair since our aim is to serve people. We are planning to release it into Google app store for users who live abroad.

Have you faced any difficulties in making the app?

Honestly, we have not faced difficulties that are worth mentioning. But the most difficult task was collecting the Tigrinya words, in the first version a team with great number of people collected the data but it’s a lot of words and did take a lot of time. Besides we were a team who had few knowledges of the Tigrinya language so most of the time we ended up confusing colloquial words and definitions with actual words.

Our future plan is to upgrade the app and design it in a way that could help the blind. There aren’t many apps in Tigrinya that specifically target the blind. So, we want to contribute in that area. We also want to create apps that translate the languages of the nine Eritrean ethnic groups into English.

Thank you for your time and we wish you luck!