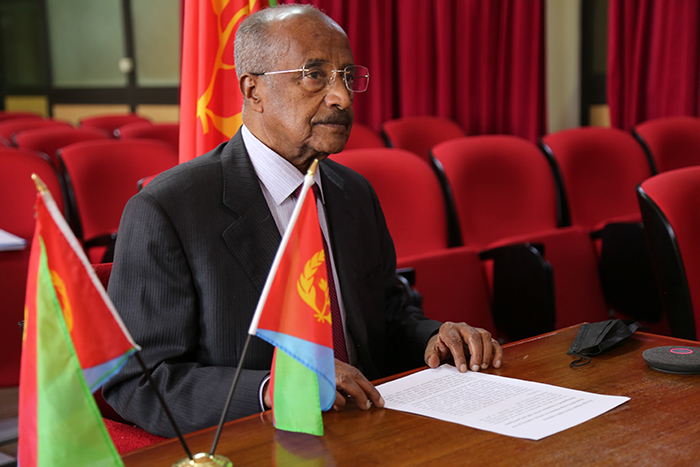 Let me first take this opportunity to express my appreciation and gratitude for the continued support and friendship that Japan has been extending to nation-building efforts of Eritrea since its independence. This was especially so after the launching of TICAD in 1993.

It may be history now. But the first half of the 1990s saw remarkable changes in the paradigm of relations between countries of the Horn of Africa, the Nile Basin, Red Sea Region and the Gulf States. This was indeed a watershed moment. It marked the beginning of a new era of peace and promising economic development in our region. Unfortunately, the hope and optimism engendered at the time was soon dashed. The region was again plunged into another spiral of unnecessary and unavoidable war, instability and protracted crisis. This could not but obstruct progress in the region despite its strategic location, abundant natural resources, and potential investment and market opportunities.

As it will be recalled, the Ethiopian government, led by the TPLF, declared an unprovoked war against Eritrea in 1998 under flimsy pretext of a border dispute. The vicious war raged for two years inculcating huge loss of life and destruction of property. Finally, Eritrea and Ethiopia signed the Algiers Peace agreement in December 2000. This was brokered by and signed under the auspices of international community.

The Eritrea-Ethiopia Border Commission announced its final and binding ruling in April 2002. But the TPLF reneged on international communities and rejected the decision. The international community failed to condemn this act. The “no war, no peace” situation that ensued, and the TPLF’s intermittent military assaults, remained the cause of tensions and instability in our region for the subsequent 18 years. Fortunately, and after the removal of the TPLF from power in 2018, Eritrea and Ethiopia signed the Joint Agreement of Peace and Friendship. This was done out of their volition and without third party intermediaries.

The new reality has rekindled hope and optimism. It has reinvigorated the desire, political goodwill and determination for robust cooperation in our region. The prospects thus remain positive in spite of last-ditch and meaningless efforts by the TPLF to scuttle the peace process.

In this context, the Government of Eritrea is ready to engage in meaningful and impacting cooperation with Japan. In the event, GOE humbly requests the Government of Japan, the co-organizers of TICAD and other development partners to take the prevailing momentum for peace as a good opportunity to push ahead with social and economic development to benefit the peoples of the region.

Let me conclude by expressing my best wishes for success to the Ministerial Meeting session.