Yohannes Kolmodin: His works in the History and Culture of Eritrea 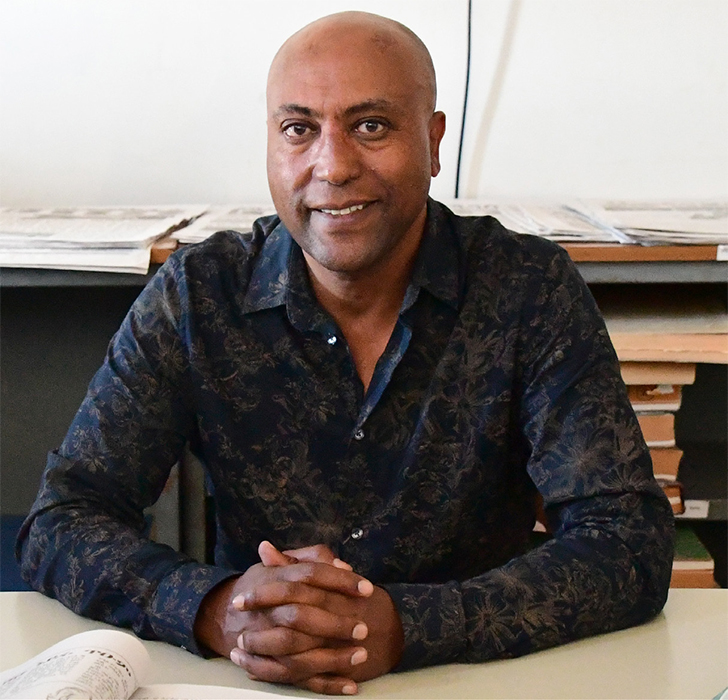 He is a former Journalist and an author who has recently published a historical book on Eritrea. While doing other researches, he found important materials about the Eritrean society from before more than 100 years. Then he decided to do further research and compile a small book with a rich cultural and linguistic texture. ‘Yohannes Kolmodin: His works in the History and Culture of Eritrea’ is a piece that is both informative and resourceful. It says a lot about the Eritrean culture and is a springboard to other studies and researches in the area. Here is our interview with the author of the book, Mr. Tedros Mhretu.

Thank you for your time Mr. Tedros, please introduce yourself to our readers.

My name is Tedros Mhretu. I was born in Ethiopia and came to Eritrea at the age of 11 and stayed until I completed high school at Barka Secondary School in Asmara. Then I left for Sweden and took my first degree in international relations and my Masters in International Relations and Journalism. Then I worked for different media outlets in Sweden such as Dagens Nheter, Swedish radio and Deutche Welle. I had worked in the positions of a reporter and editor. Then I came to Eritrea around 2010-2011 to introduce Yohannes Kolmodin and his book; ‘The Story of Hazega and Tseazega’. It was after 2011 that I discovered he had collected a vast amount of manuscripts from Eritrea. So, then I came to Asmara to introduce him and his works to the people. As part of that, I wrote an article on Haddas Eritra, a National Tigrigna Newspaper. The article mostly introduced Yohannes Kolmodin and his footprints in Eritrea. It was published in June 2012.

After that, I received a lot of feedback from readers most of which suggested for it to be upgraded to a book. Many questions then came to my head, but in the end I decided to do additional research and develop it into a book. Even after I decided to write it, it took me a long time before I actually started to do my research.

What initiated your interest on Yohannes Kolmodin and His works?

The main reason that grasped my interest to study Yohannes and his work is when I came across his book many years ago. Then parallel to my journalism studies, I had interest in different types of historical events in the times of Kolmodin in the Horn of Africa, particularly in Ethiopia. Then I knew he had written a book but didn’t know about the other manuscripts he had on Eritrea.

I found out about the other aspects of his works while going through other research materials in the Horn of Africa. I came across a book in which he was referenced to, that he collected Eritrean literature. That became the beginning of my research on Yohannes Kolmodin and his time in Eritrea. That was eye opening for me and got me curious so I came to Uppsala University and I ordered the materials that were collected during his name. When it arrived, it was surprisingly a big package; it got me stunned. So, I decided to take my time with it, go over it one by one. To look closely at the content and what use could come out of it. And it was handwritten, mostly by Yohannes himself. He was well versed in Tigrigna, Tigre, Blen and Kunama. So, when I discovered this treasure, it was a big surprise and I told myself that I had to do something about it.

Writing a book about him was not something that I set for at first. The first idea I had was introducing t h i s information on Yohannes and his work to the Eritrean people . Then as I mentioned earlier, I came back to Eritrea and wrote a big article on the general introduction of the historical researcher and his works on Eritrean literature; uncovered that he had done more than ‘The Story of Hazega and Tseazega’. Then after I received a lot of feedback from readers, I convinced myself that I had to write a book about him. I was very impressed when I discovered the works he had done and the manuscripts he had collected during his time in Eritrea between 1908 and 1911. It was quite impressive and had me motivated to write a book about it. 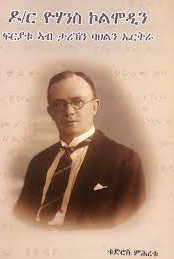 Can you give us a short summary of this book?

This book is titled, “Yohannes Kolmodin: His works in the History and Culture of Eritrea”. The first section is composed of four chapters. The first chapter being about the background of Yohannes Kolmodin, the second one deals with Yohannes’ stay in Eritrea from 1908 to 1910. It outlines what he did, his goals in this area and the challenges and encounters that he had. The third chapter mainly discusses his main book, ‘The story of Hazega and Tseazega’, its contents, the aim it was written for and the storytellers in the book. I identified them one by one and found many letters that were exchanged between Yohannes and his assistants, Yohannes and his family in Sweden, in Uppsala University.

In chapter four, you will find the aspects of Yohannes Kolmodin’s works outside of Eritrea. He came to Eritrea when he was 24 years old; inexperienced and came right out of school but he was a very exceptional person. He could speak more than 27 languages, including four from Eritrea. After he came back to Sweden in 1910, he did his research and wrote his PhD dissertation about Hazega and Tseazega. After that, he worked as part of the students’ movement in Sweden. He did a lot of things and got involved in many political issues of his time; issues of the first world war inside and outside of his country. Then he moved to Turkey in 1917 and stayed there until 1930. So, for thirteen years, he was working in Turkey; fluent in Turkish and even made big contributions in the development of the Turkish script from Arabic to Latin. Yohannes was an important part of the transition. So, chapter four is all about the works he has done and manuscripts he has collected outside of Eritrea.

Section two deals with all the materials and manuscripts he had collected during his stay in Eritrea. It is not possible for me to put all the materials he has collected in one book so I have been selective about the manuscripts that I showcased in my book. It is a load of information and requires a research as big, so I had to be selective. Thereafter, I did other researches on the ones that I selected, because some materials were missing and I couldn’t identify some of the personalities mentioned in them. We did an extensive research with Mr. Solomon Tsehaye, an Eritrean author of such fields.

What did you want to achieve by writing this book?

The aim of this book is multifaceted. As you can see, it’s a small book but it is rich in content. First I was trying to introduce him and then the works he has done in Eritrea, those who supported him, the source of his information, the story tellers. I have identified most of the actors and stakeholders in his collections. It is also to introduce this kind of material that have been collected more than a hundred years ago. It is very raw, just a bunch of cultural and linguistic experiences. We have lost touch of some of the words that you find in this manuscripts; they are almost foreign to us now. To study and recall the original version of the languages that were spoken by those people that existed more than 100 years ago is very exciting. The question is how we can adopt, use and include it in our daily linguistics.

That being the primary objective, the second is for the book to serve as a reference and a starting point for deeper and further linguistic and cultural studies. So, for those who are interested or in the field of history, language and archaeology, it is a good material, a foundation to build something out of it. Yohannes himself was not bound to one field of study. Though by profession he was focused on Semitic languages, he had multiple works he was engaged in.

People will be able to know a deeper version of their history and the languages of their forefathers. You can see how rich and beautiful the languages and cultures are just by going through some of the manuscripts. And more than admiring it, we can also adopt it. So, it’s useful for both the professional and non-professional part of the society.

Moreover, another big thing about this book is that it has inculcated information to the readers. It was released in Sweden about 2-3 months ago and it was confirmed to be eye opening for many people because not many people knew that this kind of culture, language and information was collected and well noted. Our stories are normally based on oral traditions; the information is orally passed down from one generation to another.

What makes the information Yohannes collected important is the fact that they were collected in a written form. So, now, I expect the book to have the intended informative effect on the people; about their culture, language, tradition, history; how it was formed and developed, written and spoken. As for the professionals, I expect this piece to come in handy as a motivation and a source for them to develop their studies.

What are your upcoming writing projects?

I am set to becoming a full time writer. So, as I have been working as a journalist and other related fields for a very long time, I am planning to engage in comprehensive studies and write books. I will hopefully release another work very soon. I have thrown in the bait and I expect it to serve as a stepping stone for other researches. There is a lot of information that has been uncovered after I have published this book and that too could be an additional source to the materials on the table. So, now, it’s up to other people’s initiative to take up the work. Of course I will update it someday because I have found new information about his assistant, Bahta Tesfayohannes, which was very instrumental to the completion of the story of Hazega and Tseazega. I didn’t know who this man was and what background he came from. It is now after I published this book that his relatives contacted me and gave me some background information about him. Now I know he was an important part of the picture and had to be included. In addition, I have come across some other information that can come in handy; information about the people who Yohannes Kolmodin has mentioned in his book, their direct descendants and so on. So, I am still collecting all the additional information that is flowing in after I have published my book but I will gather it and use it to update this version of my book.

Thank you very much. If you have any final remarks?

My message is that we have to focus on our history, background and cultures. I understand that we are going through a difficult time and struggle now, as we have always been for a long time, but we always need to maintain our focus. Above all, reading is the most important thing here. So, my message wraps up into “Read, Read, and Read”.