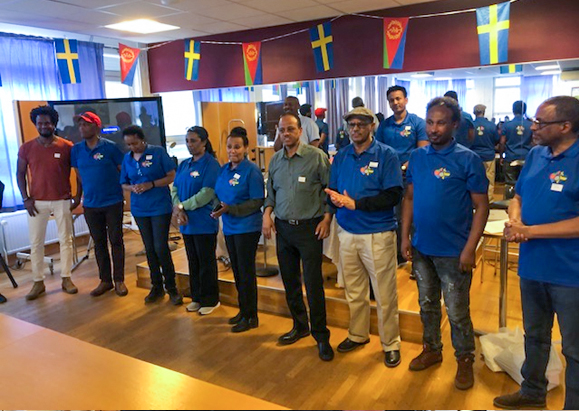 At the meeting in which over 100 representatives of the Eritrean communities from across Sweden took part, Mr. Yonas Mana, Charge d’Affairs at the Embassy of Eritrea in the Scandinavian countries indicating that the ‘Eritrean Society Organization’ has played major role in organizing Eritreans and introducing the Eritrean culture in Sweden called for reinforced effort in highlighting the Eritrean nationalism.

Mr. Biniam Misghina, chairman of the organization on his part indicating that the outgoing executive committee has tirelessly and effectively undertaken its task during the COVID-19 pandemic called on the Eritrean communities to engage in information dissemination activities focusing on encouraging investments in the homeland.

Calling for providing priority to the unimplemented programs due to various reasons, Mr. Biniam further called on the communities to exert effort in transferring the Eritrean culture, identity, and history to the new generation.

The participants conducted extensive discussion on the report presented and elected a 14-member new executive committee.

Briefings were also provided on the establishment and objective of the tasks forces and the holidays coordinating committee as well as on the Scandinavia Sports Festival.

‘Lulea’ community in North Sweden was nominated the 2021 Best Eritrean Community in Sweden.