Protecting the natural environment and redressing Eritrea with vegetation has been a major task in Eritrea following its independence. Students Summer Work Program was launched in 1994 with the grand goal of working for reforestation, soil and water conservation and environmental protection. The reforestation programs carried out in the post-independence period have shown remarkable progress. This article briefly highlights the reforestation campaigns, including soil and water conservation and tree planting programs in the Central region.

Eucalyptus is the most widely preferred tree in the highlands because it grows fast and has big demand in the construction sector. But efforts have also been made to conserve and recover indigenous trees by encouraging the planning of trees such as olive, pine and acacia.

Mr. Abraham Teklu, representative of Wildlife and Forestry Authority in the Central region, has been working in the field for over 30 years. He said reforestation is a demanding task, and although the work that has been done in reforestation is encouraging a lot more needs to be done.

To make the tree seedlings resistant to water shortages that may occur in the plantation areas, they are grown to reach at least a height of 30 cm and pass through hardening phases in the nursery stations. “The seedlings that pass all hardening phases show a 100% growing rate,” Mr. Abrham said.

Most areas in the Central region have suitable temperatures for the seedlings to grow. The regular rainy seasons and early rains have impacted the growth of the seedlings planted in various localities. Mr. Abraham said that studies show there has been an average growth rate of 70% to 80% of the trees.

The Central region has small farm areas and the tree seedlings have been mostly planted in places that are less convenient for the cultivation of crops. Enclosures have been made to ensure the safety of the trees while grazing lands have been identified to avoid conflict between farmers and the reforestation program organizers.

Residents of the Central region have been very supportive of the forestry programs. According to Mr. Abraham, in collaboration with the governments in their administrative areas and other stake holders, communities in the Serejeka sub-zone have been using income generated from the sales of trees to support social service providers in their localities.

The success of the reforestation program cannot be guaranteed without efforts to protect the trees that have been planted. Therefore, for big enclosures villagers nominate foresters whose monthly salaries are paid by the Government whereas smaller ones are monitored by foresters who are not given salaries but supported in kind by village communities.

Communal seedling planting programs have been regularly carried out in villages, and the Summer Students Work Program has been carried out since 1994. Both campaigns have made a difference in environmental protection in the Central region through soil and water conservation schemes and redressing various areas with vegetation. 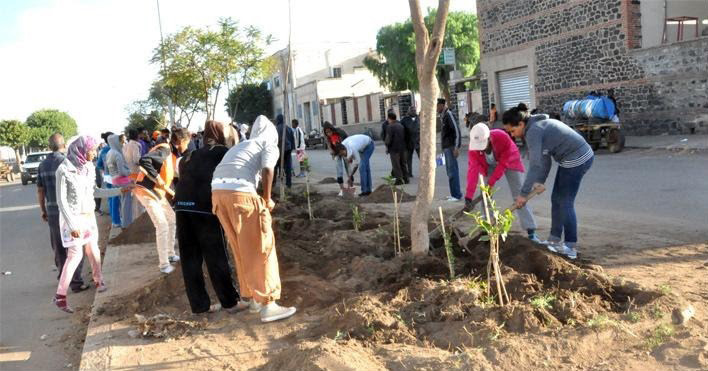 As part of the national greening campaign, 17 institutions from the Central region have participated in reforestation programs initiated in 2021 in Mai-Dmnet area. Overall, the institutions have planted on 38 hectares of land around 90,000 seedlings, whose growth rate is 92%, Mr. Abraham said. The area has been designated as an enclosure protected by foresters. In a similar vein, organized by the National Confederation of Eritrean Workers some institutions have been planting trees in Embaderho with promising results.

All parties engaged in the planting of seedlings in Mai-Dmnet area have made good contribution to the success of the greening project. The wetness in the area sustained due to the rainy season of the eastern lowlands has been helpful for the reforestation efforts in the area. Similar reforestation initiatives have been taken around Mai-Sirwa.

Mr. Abraham said that reforestation programs have been carried out for over 28 years and the result is quite impressive. Overall, the reforestation programs in the Central, Southern and Anseba regions and some parts of the Gash-Barka region have been quite encouraging and the limited growth rate of reforested areas in other regions is mainly due to their hot climate.

Mr. Abraham invites everyone to visit the reforested areas and see the achievements for themselves. He finally called on members of the general public to take communal or individual initiatives to plant trees, and he gave his reassurance that they will be provided with seedlings and technical assistance.