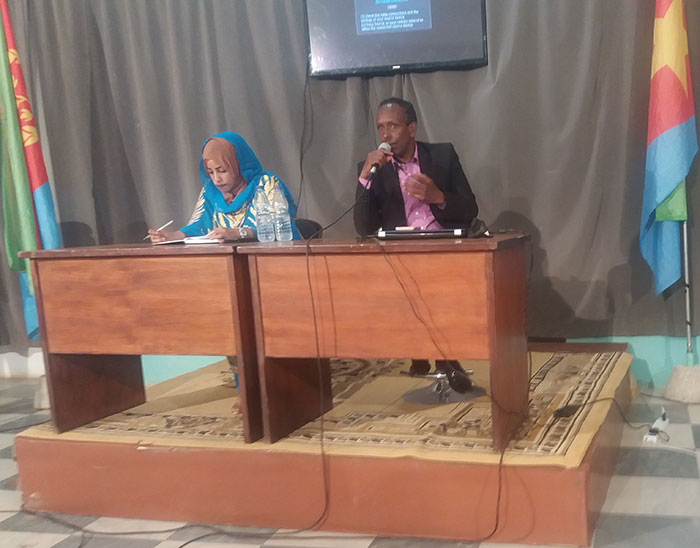 The Afar proverb which says ‘Intikuficintooy, aytiku-abbahficinto’ meaning “the ear is as old as the past” puts it succinctly. The marvel of oral tradition is that messages from the past continue to exist as long as they are told.

On March 31st last month, the National Union of Eritrean Youth and Students hosted a presentation on the oral tradition of the Tigre language in its weekly program at the Junior Club. The presentation was given by Staz Mohammed Said Osman, a former student of the Revolution School, and, currently Unit Heat at the Eritrean Commission of Culture and Sports.  Staz Mohammed has an avid interest in research onoral tradition.

Eritrea has nine ethnic groups who are distinguished by their own languages and ways of life, but united by a common history and destiny. In his presentation, Staz Mohammed underlined that oral traditions are documents of the present because they are told in the present.   Simultaneously oral traditions embody messages from the past and are expressions of the past as well. Oral poetry is introduced to a Tigre child (this is also broadly the case in other language groups) in the early ages of infancy when mothers cuddle and recite poems to infants and toddlers. 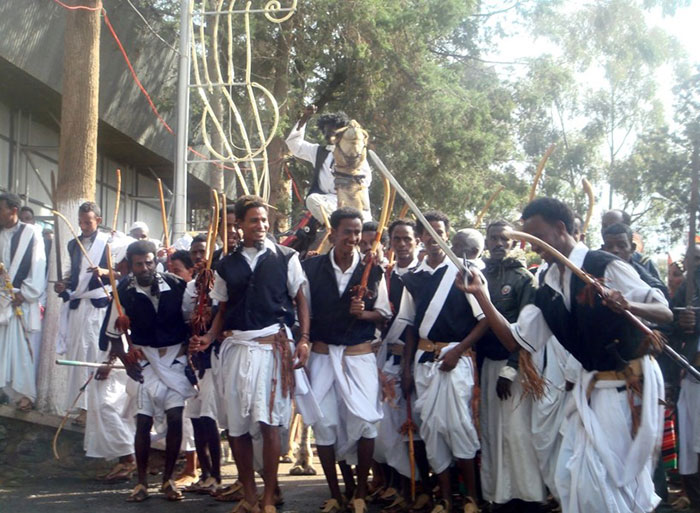 Oral tradition is part and parcel of the intangible cultural heritage conveyed from generation to generation through words of mouth and is also called a living culture. In this connection, Staz Mohammed highlighted the significance of oral tradition in the livelihood of the people. During the entire presentation, Staz Mohammed, who is proficient in several Eritrean languages, used proverbs of Tigre and Tigrigna languages to express the ideas he intended to communicate to the audience.

The Tigre ethnic group is known for its rich treasury of oral tradition that expresses many aspects of life in the society, including marriage, death, pilgrimage, customary laws, resistance, childhood, pregnancy, birth, circumcision, New Year, seasons, traditional medicine, religious traditions, and rite of passage. Staz Mohammed Said Osman said that in Tigre language, there are poems for everything; even for lice. The oral poetry for lice that caused laughter among the audience run as follows:

Although lice has no horn to pierce nor tooth to bite

No one can sleep while sucks one’s blood

Powerless as it may be, it challenges the powerful.

Here is another popular oral poetry of a poor guy falling in love with a fortunate and beautiful girl:

But we remain apart in spite of love

How can I see her family?

In Tigre, there are many traditional platforms for the conduct of oral tradition such as hakakito, mim, reb’at, Tieno, hebo, zar, kunbob, tltel, tiernie,knbob, hlay Asyad so on. Tiernie is a conversation, often awkward, between a bride and the bridegroom at the first night of their encounter. This conversation is conducted to attest the wisdom and patience of women. The man tries everything he can to undermine her patience. For instance, one bridegroom tells his bride: “Let’s see the left-over of the youth of our village” to scornfully imply that “she had premarital intercourse’’ that was regarded as indecent or immoral in prevalent societal norms. Keenly aware of the subtle insinuations of her groom, the bride responds soberly: “You cannot reverse what is gone; neither can you finish the ample endowment that is still left.” 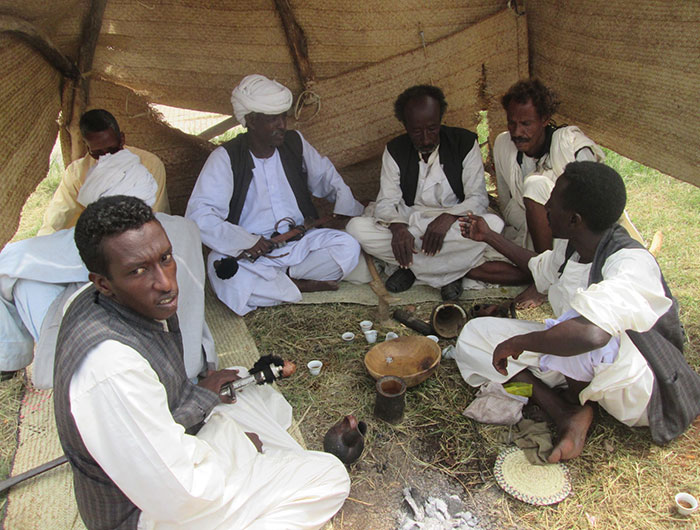 Oral literature is the verbal art of an essentially non-literate community. It is composed in the presence of an audience for its entertainment and edification. Oral poetry, one genre of oral literature, is used in the Tigre ethnic group as a medium of instruction. Patriot ZeinebYassin, a famous poet and orator, is one of the great Eritrean women who fought in the struggle for independence. When she one day saw freedom fighters running to a battle field, she felt obligated to accompany them. Unable to cope with them due to her old age, patriot ZeinebYassin resorted to expressing her feelings through a poem in Tigre. Here is its rough translation:

What can I do to this frail body

Unable to join with the fighting army

Not assigned with the public authority

My sprit can bestow liberty to Eritrea

The fire inside me can roast a meat

Tired of age, my body crumbled

Staz Mohammed gave examples of the cultural and linguistic diversity and interconnectivity of the Eritrean people. There are a lot of commonalities in the various ethnic groups of Eritrea. Staz Mohammed  gave proverbs, riddles, songs, oral poetry, folktales, legends, and myths widely used among the Tigre people that create a wealth of wisdom to solve complicated problems. He added that oral tradition, which is transmitted from the elders to the young while people gather to enjoy a coffee ceremony or on other occasions, is an integral element in the construction of national consciousness. The customs, tales, music, dances, and rituals enrich the social bonds within a community and help build group identity. In this sense, the oral tradition of the Eritrean society helps to keep intact not only the present society but also the future.

When people lose the fragile fragment of their culture they lose their reason for existence; their past and their future. Due to its strong dependence on languages, oral tradition can survive only if the rich lexicon that makes the narration attractive is still intact. In explaining the significance of oral tradition in maintaining the culture and identity of a people, Staz Mohammed noted that a society that has lost its oral tradition loses its language., and by extension its culture. He emphasized that accurate use and full comprehension of a language are indispensable for an oral heritage is to be correctly transmitted. The speaker and the listener should indeed know the words and their diverse meanings.

Story-telling, one of the oldest means of communication in human history, is very common in the Tigre ethnic group. The elders in Tigre have unparalleled skill of transmitting historical events, traditions and social norms to future generations by using compelling stories. 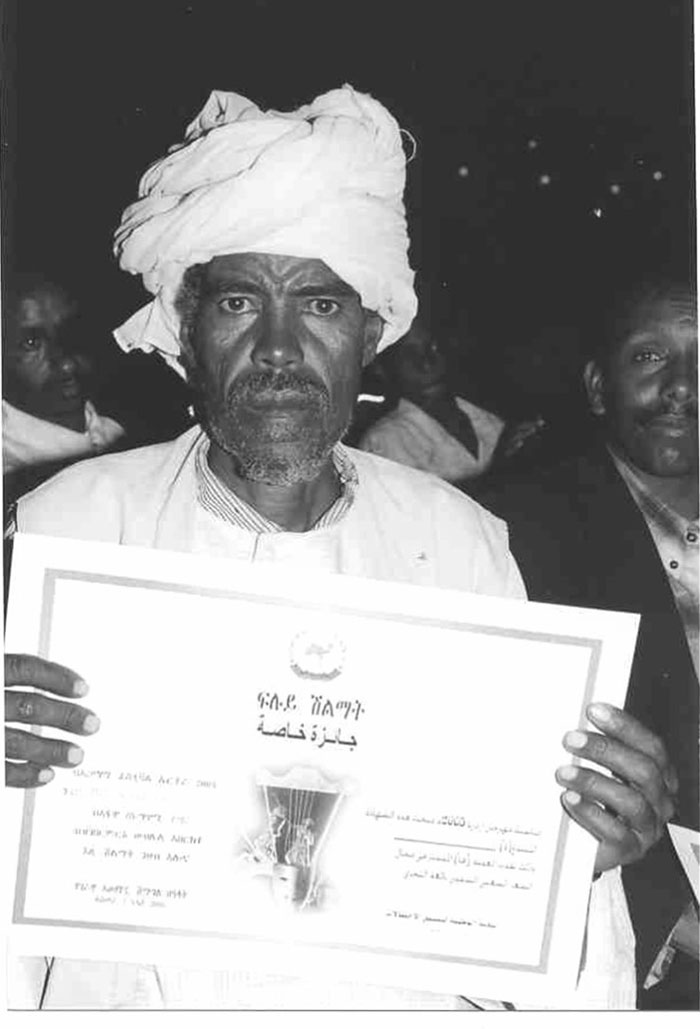 Staz Mohamed Said recited many widely used Tigre songs that praise or criticize certain conduct as a means of inculcating societal ideals. In the Tigre language group, men and women, young and old, are permitted to sing in praise of someone’s spectacular achievements or to criticize and condemn someone’s socially reprehensible behavior. They compose the songs by incorporating the historical circumstances surrounding the events. In this way, the songs of praise or condemnation serve as a medium of preserving historical records. Satirical songs are meant to prevent others from emulating the actions of the deviants and teach the people to follow the socially acceptable behavior.

We are what we are today and what we will be in the future partly because our history has been passed from generation to generation.  In this regard, Staz Mohamed underscored the need and urgency of documenting our rich and diverse oral traditions for a comprehensive study of culture, art and history of the Eritrean people.   As a modest contribution in this collective endeavor, he is writing a book on our heritage that will be published soon.

Staz Mohammed is an energetic researcher of culture; an author, poet, and a film script writer. He has so far written a children’s book about the oral tradition of Tigre ethnic group and another book of a collection of poems. He has also translated from Tigrigna to Tigre several books on Eritrean history published in the past by Hidri Publishers.