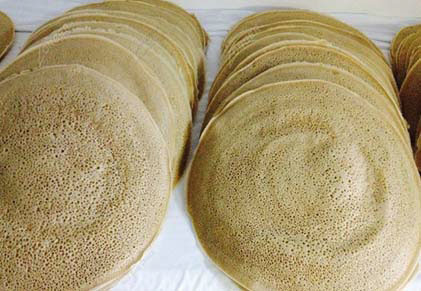 Who doesn’t like taita in Eritrea!? Come on! Unless there is something fundamentally wrong with you, taita is, well let me put it this way. As the fictional character from Seinfeld, Jackie Chiles, once said referring to O’Henry Candy bar, it is delicious, scrumptious and outstanding! Taita is exactly that.

The first European who came across taita (the soft flimsy pancake made of taff or eragrostis Abyssinica and is considered Eritrea’s staple food) lying on the mesob (cone-shaped wickerwork used as table) must have thought it was a sponge. It looks like one with the difference, among others, that sponge is spherical while taita is round and flat.

And it is made of taff, a grass-like plant which is fed to mules in South Africa and is mostly left alone as a friendly weed in some parts of the world (with apology to taita lovers all over the world).

Injera is a generic name for bread. Taita is the pliable pancake-like with one thousand and one holes (like crushed Swiss cheese) testifying to its perfection. But Eritreans seem to use the word injera for taita on many occasions.

The Italians, who colonized Eritrea, never added taita to their menu.

Maybe they thought it could easily compete with their spaghetti. I don’t think that the British who succeeded the Italians took pains to even taste it. Those who did would in their aristocratic and plumy accent say: “It does taste like the Indian chapatti in some mysterious ways, I presume!” and they would add: “Could it be that the Indians have been trading with this poor people in the past?”

The Americans, more adventurous than their predecessors, ate it and liked it. Some were rushed to their army hospital only to be given last warning not to ingest indigenous foods again. By going native, they became poor insurance risk back in the USA.

Then the Ethiopians came. These were not strangers to taita. They were its co-inventors, only that they found our taita a little bit thicker and darker than was dictated by custom.

It needs a great deal of skill and nimble hands to bake taita. Those who thought of producing it in the past must have been our first alchemists. You knead the taff flour-based dough, leave it to ferment, take a sample from the fermented part, add water, boil it and pour it over the dough and wait. Many girls fail to pass the test. They either bake injera with no holes on it, or bake good ones that stick to the surface and refuse to come out of the overheated mogogo (traditional clay oven). 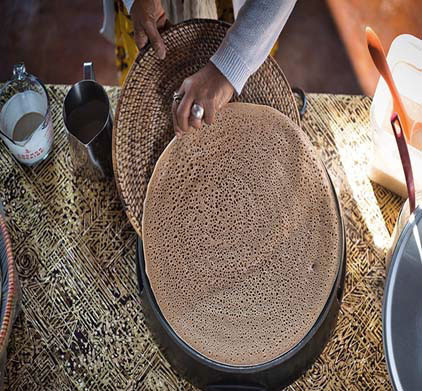 “If you fail again, you will never find a husband,” implores the mother.

“The one I marry will eat steak and pizza instead of taita and tsebhi (spicy meat stew),” retorts the naughty girl. She is wrong. I have heard that Eritreans who have lived abroad all their lives still go crazy about taita.

I am sure that only wives of feudal lords in the past could have had the time and energy to come up with such complex culinary formula.

While the serfs ate kitcha or gogo (bread so hard it breaks your jaw), the feudal chieftains relished their taita eaten with zigni and derho.

Kids in Eritrea have taita with sugar sprinkled all over for a 5 o’clock snack. Normally they spiced their taita with salt but given the opportunity they preferred the sweet sugar.

Thus, they were in some way co-inventors of the sweet and sour dish that is very much vaunted by the Chinese.

Taita+Taita=Hanza, used to say a math teacher jokingly, meaning that if you put one durra-based taita on top of another durra-based taita, you come up with a new kind of bread known as hanza. Children prefer it to taita, but it doesn’t taste good with stebhi due to its sugary flavor.

A new ingredient and a new addition to the menu. You take the taita fresh from the oven and lace it with butter and berbere paste. The end result is katagna. Only those with little cholesterol in their blood and with strong stomach lining should try it.

Baking takes almost from one to two hours depending on the quality of taita. Most of the time it happens that at the end of the baking, the dough is not enough for a full round taita (with the normal diameter). So you go for a little one. This is called ts’l’ka. It is given to children who until now have been gawking at the piles of taita.

The problem with taita is that it can easily get moldy if touched by hand. The most frightening sight for a woman is to see the taita she had baked two days ago going moldy on the third day.

What can you do with a moldy taita except throw it away? But some innovative women lay it on the ground to dry. Direct sunshine kills the mold, but the end result is a bone-dry taita, which is good only to be ground and to be used for a rainy day. This is known as korosho.

This type of food catches your eyes in airports going out of Eritrea and arriving in European or American towns.

“What is this?” once asked a customs officer at a Danish airport.

“It is our traditional food,” asserted the Eritrean.

He looked perplexed. If he suspected it for drugs, he could have used his sniffing dogs. But the dogs did not show any interest at all.

It is very difficult to explain taita to foreigners and to Europeans or Americans in particular. With most who taste it as invited guests, it is love at first sight. But there are those who wouldn’t touch it with a ten-foot pole.

“I find it very sour and bland at the same time,”

“C’est deguelass! (It is disgusting)” barks a French man.

Some taita are yellowish, others brown or even black. They say the rich eat white injera, while the poor consume the black varieties. Fortunately, it has been scientifically proved that the darker varieties contain more iron than their white versions. Iron is good for health, and helps to brighten the black mood of menstruating women.

In the past, when dignitaries came to visit the country it was customary to serve them taita with tsebhi just to show them how much you respect your culture. But you had to notify them in advance so that they may decide to take the leap of faith as they arrive in the host country.

I have heard that Queen Elizabeth I liked it after tasting it at a luncheon given in Addis Ababa by the King. 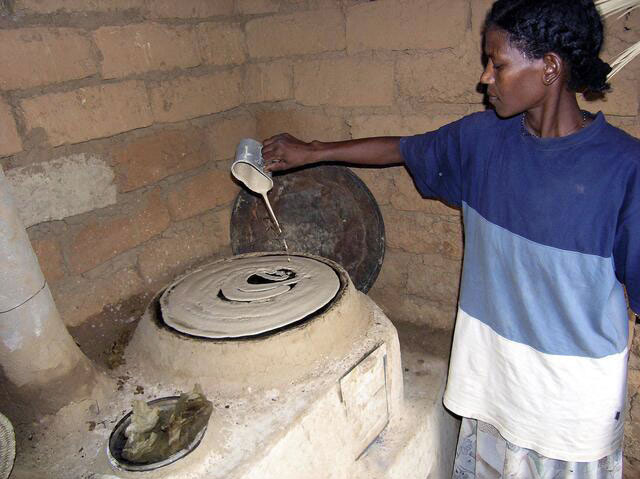 Have you heard that an American guest invited to lunch was about to use our taita as a napkin? He was right away reprimanded for his insolence by the otherwise very kind and humble host. And then you have this crackpot who dared to ask whether it moved. I don’t know what he meant by that, for if it moved it was alive, and if it was alive it was not cooked, and his hosts would have been very kind enough to provide him with a spear to kill the moving beast.

But there are those who have positive tastes for anything under the sun. Their problem is that they don’t know how to go about eating it.

A Kenyan did the following before a pile of injera and a plate full of tsebhi; he took a spoon, scooped some tsebhi from the plate and slurped it. And then he turned to the injera, took a morsel and ate it. He used a spoon for tsebhi and his fingers for the taita. Was told to put an end to his funny way of eating the semi-national dish. He couldn’t care less.

If the cereal chosen to make taita happens to be mashela (durra) then the end result is a very soft and digestible taita which should be consumed on the same day. If you try to eat it the next day with shiro or hamli (vegetables), it crumbles in your hand. More of it will be falling to the ground than goes inside your mouth; the cohesive property of durra is very poor compared with that of taff.

Now listen to this: of the taita that doesn’t have holes or eyelets. It means that either it has not undergone enough fermentation or that something other than taff or mashela has been used in its making.

Nowadays, taita is being made using not taff or mashela, but rice and even wheat. The result is, more often than not, indigestion, heartburn and sour stomach.

Where did the name taita come from? I don’t know. But there are many places in the Middle East and Asia where injera-like pancakes are made. Chappatti in India and Tanur bread in Lebanon. Wherever it might have come, taita is here to stay.

And what’s more, the elderly love it to the point of worship. This for two reasons: they say it is our culture and our pride. But the real reason is that being soft and tender it can be easily chewed with their toothless gums even during the last days of their life on earth.

Disclaimer: This writer can’t make taita even to save his life!

Tour of inspection to development sites

“If We, all Artists, Work in Unity, our Country’s Melodies Would be Known Worldwide,” Salem