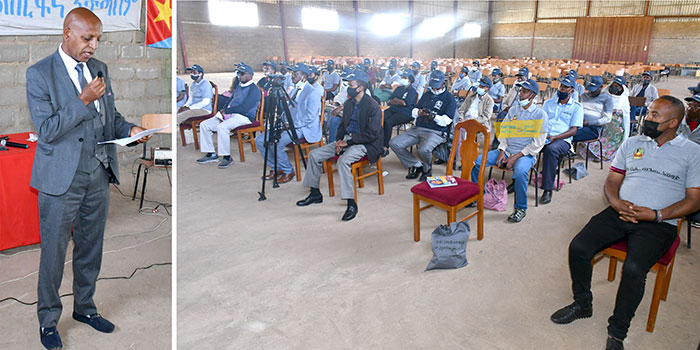 Asmara, 25 April 2022 – World Malaria Day observed in the Central region in Berik sub-zone today, 25 April under the theme “Harness innovation to reduce the malaria diseases burden and save lives”.

Speaking at the event, Dr. Mulugieta Haile, Director of the Ministry of Health branch in the Central region indicating that malaria is one of the world’s killer diseases said that according to the WHO report, the number of infections was 241 million and the number of deaths was around 627 thousand in 2020 and that 95% of infections and 96% of the deaths occurred in the African continent.

Indicating that worldwide malaria death rate in 2020 was over 900% higher than the previous year, Dr. Mulugieta said that attests to the seriousness of the disease that calls for urgent, integrated malaria prevention and treatment efforts.

The head of Malaria Prevention unit in the Central region, Mr. Kibreab Tesfamicael on his part noting that as a result of the effort underway to meet the world STD goal to eradicate malaria by 2030, the malaria infection rate that was 0.4% in 2018 nationwide has declined to 0.05% in 2021and that more effort is being exerted to reduce it to zero infection.

Mr. Kibreab also pointed out that as part of the preventive measures undertaken in 2018-2021, impregnated mosquito bed nets have been distributed to over 14 thousand pregnant women in the Central region, and over 60 thousand impregnated bed nets to people residing in mosquito breeding areas from 2017-2021.

He further said that out of the tests carried out on about 39 thousand people in the region in the years from 2017-2021only 947 people of which 855 are from abroad were diagnosed positive for malaria.

In a concluding speech, the Administrator of Berik sub-zone, Mr. Tesfu Fessehatsion on his part expressed conviction that extra-effort will be undertaken in the prevention and treatment of malaria in compliance with the programs the Ministry of Health issued.

At the observance event, various activities and experience sharing forums have been conducted with the view to eradicate the prevalence of malaria.