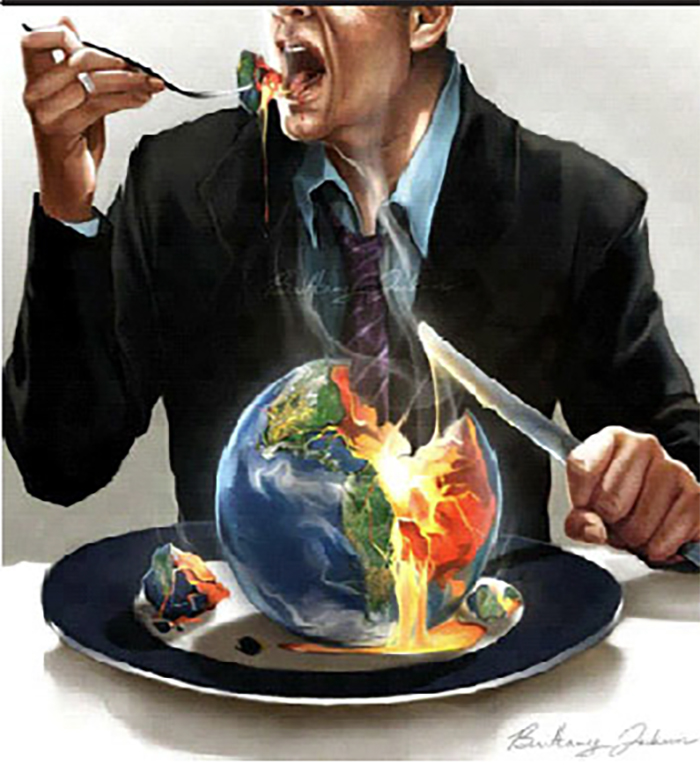 When Europeans flocked to the New Continent following its discovery in 1492, the idea was to get as much gold and silver as possible from the land they mistook for India or the China of Marco Polo.
Their kings wanted to stock their coffers with gold for an everlasting war and glory, the Church to make up for the money it had failed to obtain through the sale of indulgences to ‘lost’ souls, and the elderly, perhaps, to fill their teeth with gold so that they could die with a golden smile on their faces.
The natives of the New Continent were taken aback, rather shocked, by the total greed of the new arrivals whom they thought were gods who came to fulfill ancient traditional prophecies. For them, it was quite strange that ‘aliens from outer space, probably from distant but very many civilized galaxies, could be so much preoccupied with gold and silver as to forgo the honor associated with royalty. The Olympian gods, who in former times lusted after women and gold, would have shown better manners.
These visitors, who came from across the ocean, did not ask the usual question supposed to be asked by green men, namely: ‘take me to your leader’, but preferred the more down-to-earth and rewarding one: ‘take me to the goldmine on time!’

In line with this, it can be said that the first question ever addressed (probably in Castilian) to the Red Indians after the motley crew from Pinta, Nina and Santa Maria had rowed ashore and met the natives, who sported gold amulets and gold ritual masks, was: WHERE DID YOU GET THE GOLD?!
Thus, it can be said that the first large-scale hold-up in history took place in South America before it could move to the streets of Chicago and New York. Your gold or your life! The threat was so unfair that at the end of the day the natives lost both gold and life. Al Capone looks juster and kinder by comparison.
Suppose the new continent did not contain any gold or silver at the time, would the colonizers have continued to flow there just the same? one may ask. By all means! Greed has never listened to reason. There is a proverb in our country which goes somewhat like this: when they told the poor hyena that there was a faraway city made of meat and bones somewhere beyond the hills (a sort of meaty Shangri-La), he rushed out without asking to know of its exact position. It is, however, a tribute to the loftiness of the human spirit in the face of greed that Columbus had, at least, the sense to be appraised of ‘El Dorado’s exact position before he set sail westward. Go west young sailor till something stops you, like for example, a mountain of gold!

This was of course repeated in Africa, Asia and many other places the colonizers set foot on. The caravels used by these people might as well have flown the Jolly Roger (skull and crossbones) as they sailed the high seas with a Señor de las Quintas, a Marquis de la Grange, a Sir William Scot and a Van der Valt on board. It would have been more proper had these gentlemen changed their names to Señor de las Greedas or Sir William McGreedy, Van der Greed instead; appellations consonant with their trade and befitting their manners.

Of course, all of these plunderers had priests and pastors accompanying them. While the natives were busy being saved in some remote churches in the jungle, the colonists stole and looted as they listed, for they all came with their own versions of Christian values elevating greed to the state of virtue. They ‘saved’ souls as a spiritual investment for a happy life in the hereafter, and saved money to enjoy life to the fullest in this uncertain world.

Those who, amongst them, got away with their ships laden with more gold and silver than would have been tolerated by the dictates of the greed of the times, had to be hunted down and their vessels scuttled and their gold coffers robbed clean. In the game called hide-and-greed played in the open seas, rich bankers and investors watched with drooling mouths, as sea powers such as England and France slugged it out in various spots of the world for power and riches. These events were replayed in recent times in Iran, Iraq, Venezuela, Libya and now Syria. It is like: the same film company that brought you The Sea-Hawks starring England and France.

At this juncture, someone might interrupt and say that one cannot after all separate colonization from greed, for the principal motive behind the former is to take the land of others with total impunity, exploit the inhabitants and take away their riches without shame. No one ever went, one would add, to colonize other lands with glad tidings of salvation or emancipation or with the motive of preaching liberty, equality and fraternity.
Well, the problem was not so much with colonization as with the immense scale with which it was carried out, assisted by the accelerating socio-economic momentum that led to capitalism in all its ugly forms.

I don’t mean that greed was invented by Europeans. God forbid! Why should it be when sin (of which greed is only a component) had already infected mankind during creation? All men are created equal with equal count of greed genes in their blood. But, just as a virus had to wait for centuries hidden in some corner of our frail body for an opportune time to strike with a devastating impact, in the same manner had the all-encompassing greed, latent in man, to wait for the invention of the gunpowder and fast moving sailing ships equipped with compasses to take the lead in the affairs of men.
The frightening thing about greed and all its attendant sub-vices was that it could easily lend itself to institutionalization. Hence, big overseas companies, factories using child labor, commerce and loan banks thriving on slave trade, insecure insurance companies, bloodsucking lawyers, usurers of all types, spawned, and committed unspeakable crimes in the name of progress. The IMF and the World Bank followed to complete the misery.

Almost a millennium and a half after the Sermon on the Mount had been preached, greed was elevated to the rank of a guiding principle, a loadstar to those in search of riches at all cost.
Can you imagine of anything as evil as greed made to work as a driving force and as a primary impulse for the fast socio-economic and technological growth of our planet? And yet that was what happened during the centuries that followed the age of discovery and conquest. Never in the history of mankind has greed been venerated and trusted so much as to be made to march with lies and cheatings massed behind its back and wars and strife guarding its flanks. Millions of Africans had to be moved to the Americas to help the Whites make fast money! And as one American son-of-a-gun has put it aptly, the fastest way to make money is to steal it!

Now with all the rich people getting richer and the poor getting poorer, things were getting dangerous. Adam Smith wanting to accommodate greed by all means advocated for capitalism. Marx, in his anti-greed campaign, wanted to reverse (or maybe to correct) the course of history by preaching communism. Georges Sorel, desiring to nationalize and sanctify greed stood for fascism. Mikhail Bakunin, from Russia, fearful of the motives of governments in all their forms, stood for their total abolition by preaching anarchism.

And prior to these gentlemen, we had Hobbes, Rousseau, Montesquieu, and Locke, who presented themselves as physicians and tried to find the proper balm, if not medicine, to cure the rising social and political ills of the time.

When all failed to effect a sure remedy to the current disease, it was assumed that liberal democracy could do the trick, not because it could cure the disease (far from it) once and for all, but it could at least gradually accustom the world to the disease itself. Most of the physicians who diagnosed the disease were either reluctant or simply hesitant to take the necessary but painful steps for a lasting remedy, which was nothing else but the application of the principle of human rights, equality, justice and tolerance.

Alas, as foolish mistakes and sometimes hasty decisions based on quick fixes created disasters in the four corners of the world, their consequences have been presented to us as breaking news to keep us worrying, as editorials to be analyzed by eager but insincere politicians, as research works to be commented by academicians, and as hot issues to be fought by rival parties. And as man-made disasters multiplied, Tarzan-oriented NGOs moved into action whose cure was, more often than not, more painful than the disease itself, including innumerable do-gooder organizations who went around dressing up wounds that could never heal.

As incapable physicians continued to provide remedy at every turn of the long march towards doom, the real but painful cure has been made to wait, and means are devised with which to placate and appease the people in the most subtle and clever way.

As I have said above, unscrupulous profit-at-any-cost mentality found its winged horse as a vector in the invention of fast moving sailing boats, gunpowder (at the time used for entertainment by the lighthearted Chinese) and the compass which helped greed and callousness to spread their tentacles far and wide.

Alas, with the invention of the airplane, the telephone, the radio, the TV and the internet and the e-mail etc. and with the subsequent shrinking of the world into a small village, greed is just lurking across the fence. Paupers of the world unite, for the boogeyman is peeping through your windows to eat you alive one day!