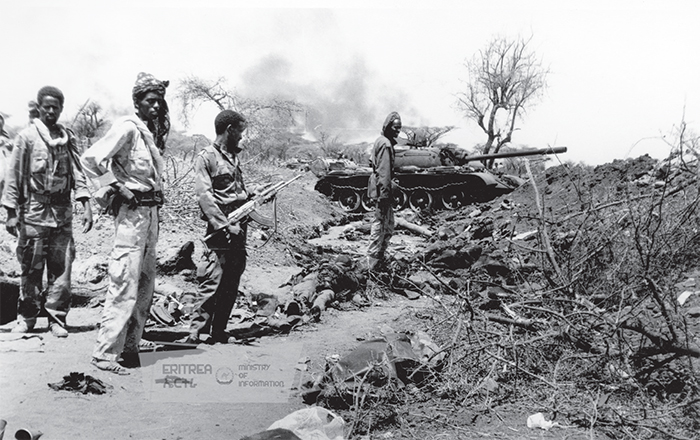 Editor’s Note: The story of the battalion is translated and compiled from a chapter written by Teages Frezgi, taken from a Tigrinya book published in 2019 entitled; ‘Mekete’.

The story of the battalion is an eyewitness account of the ordeal of a battalion from Assab, under the command of Lieutenant Menghisteab Samuel (Martov). The first part of this story of incredible heroism was published in the May 7 issue of Eritrea Profile, the second and final part continues…

All this burning hell was in an open plain field, where our forces were exposed to the fire coming from the planes and helicopters, rocket launchers and cannons from across the Belesa River, and the anti-aircraft and machine gun rounds from meters away.

While the heated game of hide-and-seek with the tanks was played, the other members of the battalion were in their trenches busy fending off the attacks of enemy’s foot soldiers and their accompanying tank shelling.

Within an hour, five enemy tanks were destroyed by Martov’s RPGs while many others were destroyed by the fire power of our mechanized units. The enemy’s plan was shattered, but it made a second attempt, to hang on to the small opening created by any means possible and see what its three tanks that had crossed our lines could do.

The enemy command was heard barking empty orders and hurling insults on their forces. ‘What the hell are you doing, why don’t you continue forward?’ was the repeated cry that was heard. The enemy commanders were compelled to report to their superiors the heroism and guts of the defending unit that would not budge an inch. “What you are saying is impossible. These are fearless men who dared to mount our tanks…I am the only one left” was the junior’s gloomy reply. While the communication continued, the other end asked, ‘Do you have any clue about the identity of the unit?’ “So far I have no idea.” “Try and report back, by any means, and never come back”, was what was eavesdropped. 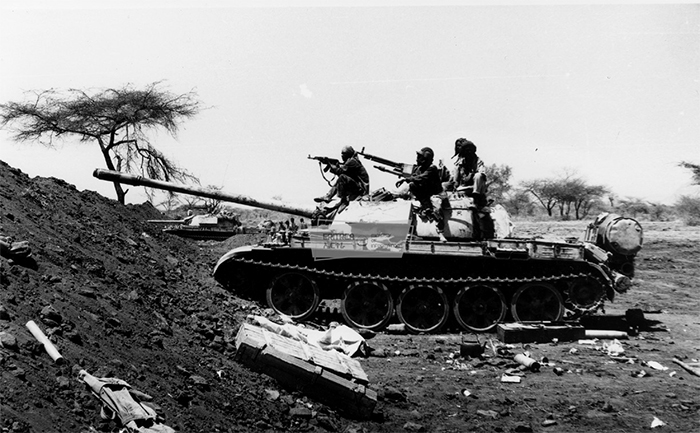 Now, the work for Martov’s battalion was to prevent the gap from widening and hold back any attacking tanks. And to this end, the battalions were shuffled to narrow the gap and firmly hold their ground.

The tanks that had made the heap of rock and sand their shield were making the mobility of the battalion difficult. Many fighters who tried to seal the gap were either killed or wounded. And it was at this moment that Netsereab Keshi, a 2nd round national service, consulted his fellow 3rd round national service, Nabay Beyene, to somehow sneak in and destroy those tanks to ease the pressure on the battalion. This idea was supported by the RPG man, Mohamed Said Abdalla, Shifa and Rambo and along with three others briefed their platoon leader, Idris Ibrahim (Shebah).

Idris supported the idea but told them to wait for the night to fall. But these young men couldn’t wait and, in no time, moved fast to occupy one side of the heap of soil. In a matter of seconds Nabay and Netsereab (Wedi-Keshi) were able to throw their hand grenades. In this exchange of fire Rambo was killed. The others — Nabay, Hamed Saed and Wedi Shifa–were lucky to go with minor wounds. The only one left to help the wounded and fight the enemy was Netsereab. This was a setback, but not to Netsereab, who insisted Nabay to go to the safe side of the canal. Next, jumping into the canal, Netsereab took an enemy machine gun and started to fire alone and mow the pack of enemy soldiers confronting him, until he was later joined by his company. 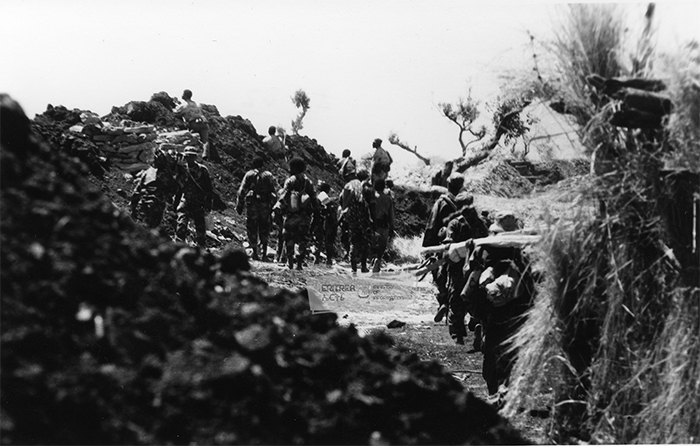 The nearby medical unit of the battalion was waiting to treat its wounded soldiers, but the expected wounded did not come. Alarmed, the battalion’s medic, Wedi Mael, accompanied by Abeba, Trhas and three others, was soon on the road which he didn’t know was blocked by the three enemy tanks that had crossed our line. It was a challenge, but the medic’s daring stand made them go between those tanks to reach their comrades at the frontline.

Having failed in all its early attempts, the enemy resorted to its old tactic of attacking in human wave. The whole day, all its divisions, one after the other, were made to attack but were totally annihilated by the concentrated heavy gun fires coming from the East and West before they could move an inch from the Belesa River. Those who took cover near our trenches were either blown by our land mines or riddled by our bullets. Those who attacked did not leave the scene alive. Every division’s enemy soldier that crossed the Belesa River to enter the flat plain was either killed, wounded or maimed. The flat plain of Igri Mekel was all littered with dead and mutilated bodies, scattered unidentified limbs, the wounded crying for help, burning tanks and burning trucks.

Despite the heavy loss it sustained, the enemy was again to use the cover of the night, ordering its foot soldiers to march to attack through the open line in our defenses. Indeed, after a prolonged heavy fighting the enemy was able to reach the command post of Martov. Here, Martov had no choice but to use his staff and the intelligence unit, headed by Kbrom Tesfamichael, to fight to the end until an unexpected arrival of Tsegay Saka and his company for the rescue. In no time, Tsegay’s company was able to push back the attacking enemy past our defense line.

Jemal Mohamed, Martov’s superior, had an extra radio to hack communications of the enemy. Through the radio, he came to know that the enemy was to use two brigades that (Sunday) evening to attack through the open line and head directly to the three tanks that had crossed our defense line.

The first enemy’s brigade was to reach the three tanks that had their beam lights switched on, and the second was to follow behind. If the enemy was to use those beams as signals and reach the area, the damage would be high. So Jemal gave an order to the company commander, Wedi-Melit, to burn the tanks. Finally, help came with the arrival of an extra battalion to seal the breached line. 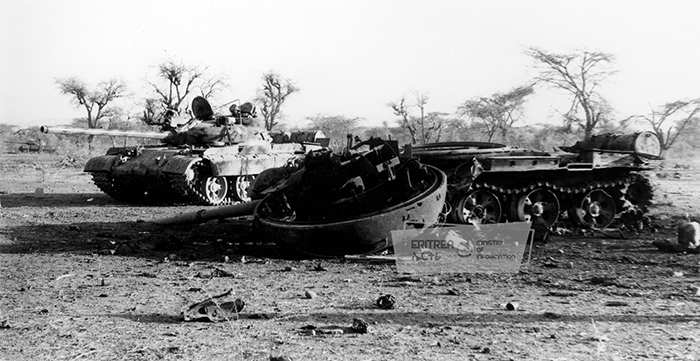 As for the two brigades that risked entering the trap, they were smashed by the heavy gun fire coming from three directions — the highland of Adi-Quala, the highland of Senafe, and the Hazemo plains. The enemy’s plan, except for the scattered mortar and signal fires, was over and the night ended. This lull in the fighting encouraged us to take a break to change our batteries, films and catch a short sleep. But this was suddenly broken by the resumption of the sound of heavy guns and the shattering noise of the planes flying low. Again seeing the movement and the attacking formation of the enemy tanks directed into our defense line, Martov automatically ordered the company leader, Wedi-Suleiman, to send the platoon leader, Ghebrehiwet Ghebremariam (Chfri) and the RPG gunner, Desta Abrha, to the endangered place. When the two reached the place, Martov asked Chfri if he could fire from the place where he was. The reply was affirmative. Instantly, two tanks were hit and exploded. The third was crippled only when its chain was hit. The fourth, too, was to get a direct hit and explode. Chifri’s last rocket was to maim the 5th tank. Their mission completed, both heroes went to their units to rejoice their victory.

Sunday’s blow was apparently not sufficient, though, to teach the enemy that its tank warfare was over. The enemy betted yet again to use all its remnant foot soldiers to attack our forces. In fact, it did control a narrow corridor. However, with the loss of all its tanks and soldiers, it reached a point it could no longer attack or defend its position. In the evening the enemy withdrew from the defense line it was able to control for a while. On Tuesday, with all its dreams shattered, it withdrew hurriedly, leaving all its weaponry, including the wounded and dead soldiers behind, crossed the Belesa River and never came back again.

As soon as the enemy left, we headed to the front, down to the trenches where the heroic battle took place. It was an ugly scene. The air was filled with the stench of dead bodies, the black smock from the burning tanks, the cries of the wounded, dead civilians with their pack of animals that were brought by the enemy to carry the loot. Here and there, scattered all over the place were abandoned tanks, army trucks and bulldozers, all intact, that became our property.

On the other side of the spectrum, we could see tired and dust-covered fighters, but with high morale, searching for the bodies of their fallen comrades. Others could be heard hooting, shouting, laughing roaming through the debris or climbing the abandoned tanks.

Martov’s battalion alone destroyed ten tanks while its sister battalions destroyed four. The number of tanks destroyed doesn’t include the many that were hit by antitank missiles and RPG rocket fires from other units.

The three-day fighting that ended with the victory of our gallant forces was not without a price. 35 lives from the 450-strong battalion and 75 from the whole brigade to uphold the sovereignty of Eritrea. The battle was over but not for the battalion, which was soon on its way to join the battle that was raging in the Mereb-Setit front.