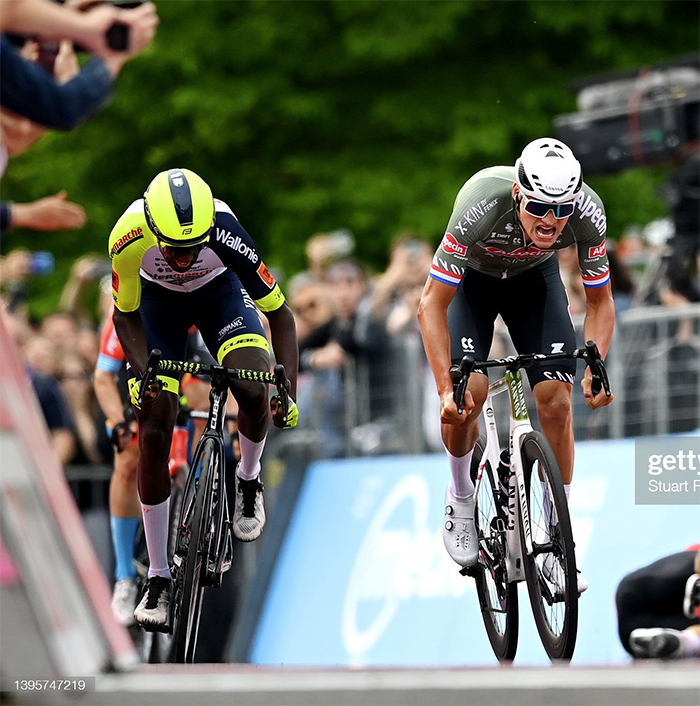 When Biniam won at Gent- Wevelgem classic (one of the oldest and most prestigious classics in cycling) in March, he decided to forgo the Tour of Flanders in order to go home and see his family for the first time in almost three months. “The Tour of Flanders is not on my schedule. I wish I could stay but I stayed almost three months without my family so I have to go back home and see them”, he said. In hindsight, it might be the best decision he made. In the ongoing Giro D’Italia, The Intermarche- Wanty Gobert rider looks fresh and with a mission to prove to everyone in the cycling world that his win at Gent-Wevelgem was no fluke, and boy, he is doing that with style.

The Giro is into its eighth stage, Biniam has so far finished in the top five in four of the stage races, his highest coming in the opening race of the Giro, coming in second place behind Mathieu Van Der Poel. Yes, you read that right, second only to none other than Mathieu Van Der Poel, winner of three major classics and a stage winner in the 2021 Tour de France.

Fabian Cancellara, a Swiss cycling executive, businessman, and former professional road racing cyclist, in re to Biniam’s win in Belgium said he was both surprised and not surprised at Biniam’s win back in March, adding when Girmay opens up the sprint from the back with 250 meters to go into a headwind against more experienced riders, you’re sort of not surprised. He was the closest one to Van Aert and Laporte on the Paterberg, and that says it all. E3 is the hardest classic outside Flanders and Roubaix, so to go there and do that on your debut, you can’t bluff it. It’s pure talent.

It is once again that pure talent that sees him brush sides with the likes of Mathieu Van Der Poel, Mark Cavendish, Caleb Ewan, Simon Yates, Arnaud Demare, and a host of other seasoned riders for a stage win.

“It’s going to be, I think, the best moment ever. It’s a dream of all African cyclists to win a Grand Tour, especially the Tour [de France] or Giro.” Biniam said before the beginning of the Giro.

On the opening stage of the race which covered a distance of 195 k/m from Budapest to Visegrád, Eritrean riders Biniam Ghirmay, Natnael Tesfatsion, and Mehawi Kudus took part in the race representing their respective teams. After Biniam’s win Gent-Wevelgem, it was quite obvious the spotlight was going to be on the young rider and his team Intermarche-Wanty Gobert. Biniam didn’t however shy away from the challenge and attention. In the final sprint to the finish line, Biniam found himself in the mix with Dutch rider Mathieu van der Poel, Pello Bilbao, and Caleb Ewan. Caleb crashed after touching Biniam’s back wheel and with 200m remaining the stage was set for a scintillating race finish between Van der Poel and Biniam. It was Van der Poel who piped the young rider of the day Biniam to the finish line. This in itself was a hefty achievement from the Eritrean rider, setting the stage for what is to come in the next three weeks of the competition.

Biniam didn’t put a foot wrong on his debut grand tour race saying at the end of the stage race “I never did a sprint like that before, I was on the limit. I’m really happy with this result. Van der Poel was the strongest today but I will try again on Sunday.”

In stage two of the race, wearing White Jersey for the best young rider on the tour Biniam who is naturally a sprinter, took part in the time trials, at the end of the race he was quick to praise the support he was shown by the fans, “It was an amazing experience to become the first rider of our team to wear the white jersey on a Grand Tour, cheered by the wonderful people of Budapest,” he said.

Stage three of the tour was won by veteran Mark Cavendish. Making it a remarkable 16th stage win for the Quick-Step Alpha Vinyl rider. Biniam once again showed his ability to stay in the race up to the end, finishing fourth in the race. Biniam who is now quickly being kept at an eyes length by his follow competitors found himself boxed in leading up to the finish. He however couldn’t hide his excitement at the way he has started his first Grand tour saying, “What an amazing start to my first Grand Tour. I’m happy with 4th place against the best sprinters in the world. Thanks to my teammates for the fantastic job!”

Stage Four was back to Italy and saw Biniam, once again in the Maglia Ciclamino keep pace with Van der Poel who attempted to break away in the early stages of the race. Stage four however was a day for climbers, which saw Eritrea’s Merhawi Kudus finish in a respectable 64th finish while Natnael and Biniam finished 128th and 130th.

Stage five consisted of a bunch of sprints and a climb which saw sprinters Cavendish and Caleb drop out, setting up for a tantalizing finish in the end. Biniam reached the final 10 kilometers of the race protected by his teammates ahead of the sprint in Massina. In the lead-up to the finish, Bini impressively avoided a crash in the final 100 meters to finish 5th. “Everybody did a good job. I had good legs but I’m happy to get out of trouble. I almost crashed twice in the final 100 meters,” he said after the finish. Amazingly, Natnael, also a young talent both in sprint and climbing, took on Biniam’s wheel on that day and managed to come in 8th, giving Eritrea two top ten on the same day.

On stage six, Biniam continued his impressive start to the tour by beating Demare in the intermediate sprint & scored 4 more points for the Ciclamino jersey. For the final stretch of the stage, Biniam reached the sprint race protected by his teammates. On a full flat finish, Biniam came fourth. At the end of the race Biniam attributed the great result to his teammates for putting him in an ideal position, “Even though my profile is more adapted to harder races, I also appreciate pure sprint stages like today. In the final 20 kilometers, the battle toward the sprint was very exciting and tough. It was extremely nervous, many risks were taken and crashes were avoided. My teammates guided me to the front for the final 700 meters, enabling me to rival again with the fastest sprinters. During the sprint, I had to brake several times, and in the end, I was defeated by Démare, Ewan, and Cavendish, who were the fastest today. I really loved this battle and I’m already looking forward to the next one!” he said.

In four of the six stages carried out at the Giro, Biniam has finished in the top five in four of them proving he does have the raw talent to compete with the best. On his debut grand tour, Biniam’s impressive ran might come as a surprise to some but to the majority it was expected, his win at the Gent-Wevelgem classic back in March signaled what was to come from this young rider from Eritrea.

To come up against the most seasoned of riders and hold your own is by no means a fluke but pure talent. It shows in the way his team protects him leading up to a sprint race and it very much shows in how these seasoned riders keep an eye for him when that final stretch to the sprint race approaches. Currently, Biniam sits in second place in the Maglia Ciclamino with 94 points, 16 points ahead of Mark Cavendish.