What do we know about Snakes in Eritrea? 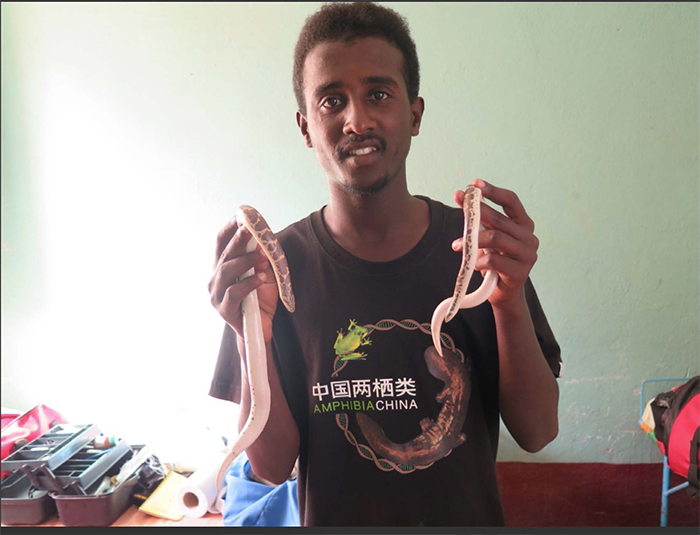 There are about 3600 species of snakes in the world. The great majority of snakes are not dangerous to humans. Less than 200 are venomous species that can maim or kill humans. The regions with the most snake species are Africa, Southeast Asia, Australia, and South America.

Africa is home to more than 400 snake species, of which about 30 are known to have caused human deaths, according to the World Health Organization (WHO). With 36 recorded snake species, Eritrea has a high species diversity due to the different habitats available for snakes to live. Six of 36 species are dangerous to humans. At an elevation of over 2300 meters, Asmara is the sixth-highest capital in the world. The Ministry of Tourism advertises the road from Asmara to Massawa as “Three Seasons in Two Hours,” with the cool air of Asmara as the fall, the plateau around Ghinda as the spring, and the heat of the Red Sea desert at Massawa as the summer.

Climate, elevation, natural vegetation changes, and the descent from the Eritrean highlands to the coast provide different habitats for snakes. Twenty or more of the 36 species may be found along this transect. No one place would have 20, and changes in snake diversity vary with changes in habitat. It is not likely that a species of snake that lives at 2300 meters around Asmara would also live at sea level around Massawa. Snake species diversity is included in surveys of each zoba by the Forestry and Wildlife Authority, the Ministry of Agriculture, and the Ministry of Land, Water, and Environment. 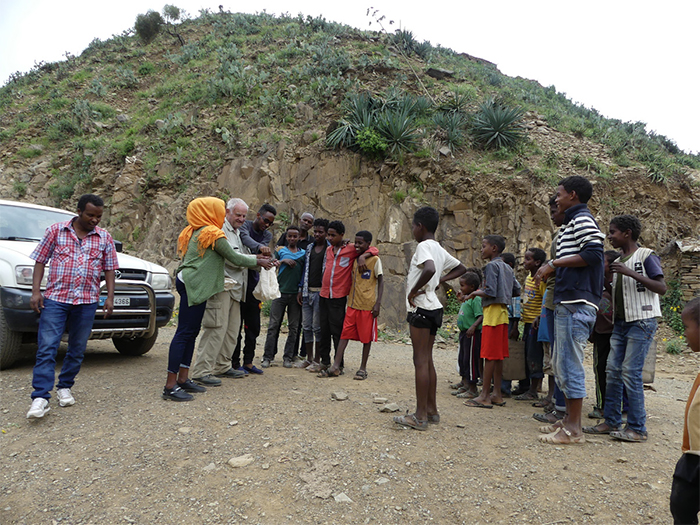 Snakes are important in the ecosystem as part of the food web in nature, consisting of what animals eat and may later be eaten by other animals. For example, a snake may eat a rat, and later, the same snake may be eaten by a leopard. The first step in documenting snake diversity is to look at historical records. The limited historical records from before independence can be plotted using online databases of biological collections. An example from the University of California Museum of Vertebrate Zoology is a Black Mamba (Dendroaspis polylepis) collected at Ghinda on 27 March 1943. This dangerous species is the longest venomous snake in Africa and may reach three or even four meters.

Fortunately, Black Mambas are very rare in Eritrea. Other than the Ghinda specimen, I know of only other specimen that is kept in a natural history museum in Genoa, Italy. It was collected at Keren in the 19th century. The 30 harmless snake species range in size from tiny blind snakes less than 5 centimeters long that live underground and eat ants and termites to the huge African Python (Python sebae) that can reach up to 5 meters and weigh 50 kilograms. Pythons are usually found in the lowlands of western Eritrea near permanent and seasonal rivers in areas with natural dense vegetation.

There are no confirmed reports anywhere in Africa of an African Python eating a human. The main foods of adult pythons are medium-sized mammals. Occasionally, domestic goats and sheep are eaten. A much smaller python relative is the East African Sand Boa (Eryx colubrinus). They live below 1000 meters in both eastern and western Eritrea. This species is common, but people rarely see them because they are only active at night. They should be left alone and never killed because they eat mice and rats pests in farmer’s fields. A typical medium-sized harmless snake is the Large-eyed Cat Snake (Telescopus dhara). The species is found in desert and savanna regions of Africa north of the equator, the Middle East, and the Arabian Peninsula. The adult size is about one meter. They hide under stones or holes during the day and climb up in bushes and trees at night to search for small birds and sleeping lizards for food. The Cape File Snake (Limaformosa capensis) is fascinating and beneficial. Adult file snakes reach a length of up to 1.5 meters. The main diet is other snakes, including highly venomous species like cobras and vipers. However, even if they are bitten, file snakes are immune to venom. We found one at night in the village of Durfo near Asmara.

The following day, we showed the snake to a group of young Eritreans. This was an excellent opportunity to talk about the positive contribution of harmless beneficial snakes to rural communities. Venomous snakes evolved long before there were humans on Earth. All snake species eat other animals. No snakes eat plants. A snake uses venom to kill food to make it easier to swallow. Humans are usually only bitten during accidental encounters like stepping on a snake when walking at night wearing sandals or during the day when clearing the land before planting crops. 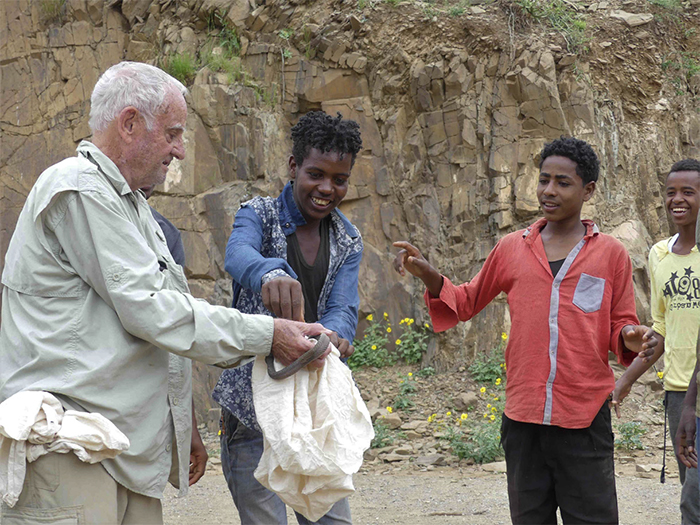 There are two main types of venom found in snakes. Hemotoxic venom affects the circulatory causing tiny blood clots and internal bleeding. Neurotoxic venom affects the nervous system and can cause paralysis, resulting in loss of ability to breathe. In some species, both types of venom may be present. Most African vipers have hemotoxic venom, and most cobras and relatives like mamba have neurotoxic venom. Venom is injected with hollow fangs into the roof of the mouth. Vipers have large fangs with hinges that extend from the top when the snake bites. Cobras have small fangs fixed in place on the roof of the mouth and do not move forward when the snake bites its prey. In Eritrea, there are two vipers, the Northeast African Carpet Viper (Echis pyramidum) and the Puff Adder (Bitis arietans). In addition, Egyptian Cobras (Naja haje) and Nubian Spitting Cobras (Naja nubia) are present in Eritrea.

There are several species of spitting cobras in Africa and Asia that can spit venom upward for one or two meters. Spitting is a method of defense that is thought to have evolved to keep grazing animals from stepping on and killing the snake. A spitting cobra raises its head and neck above the ground and aims the venom towards the eye. In the rare event that a cobra spits in the eyes of a human, the eyes must be flushed with large amounts of water to eliminate the extreme pain caused by the venom and prevent permanent vision damage.

This ends the first article about snakes in Eritrea. The next issue will continue with details about the frequency of venomous snakebites in Eritrea, current medical treatment of bites, and the urgent need for improved antivenoms. The World Health Organization includes snakebite envenoming, killing between 20,000 and 30,000 people a year in Africa, in the list of Neglected Tropical Diseases (NTDs) of the World Health Organization (WHO).

Museum of Vertebrate Zoology University of California at Berkeley

With young people of Durfo.

“Leaving no one Behind” is More than a Slogan