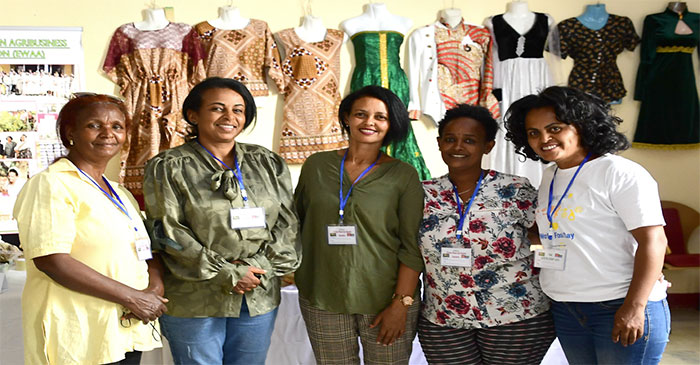 Agriculture is the backbone of our economy, and farmers contribute to the efforts to achieve food security and national development. Although commercial farming is predominantly practiced by men, there are women farmers in Eritrea who mostly engage in small and medium scale farming. Their most crucial challenge has been marketing their products, and the Eritrean Women Agribusiness Association (EWAA) has been a leader in taking initiatives to address the challenge and empower women farmers.

At the beginning, almost all of the members of the association were beginners in their respective specialization such as dairy farm, poultry or food processing, etc. Therefore, capacity building courses and training suitable to their own fields of interest had to be given as a starting point. Based on their specialization, members are organized into groups: dairy farmers, florists, poultry growers and honey gatherers. At around 2005-2006, the members took basic courses organized by the Ministry of Agriculture (MoA). The courses were not limited to agriculture and included business management courses as well. In 2013, the association began a formal relationship with the MoA and got a license to operate.

When the association began to work to increase its membership in all the regions in the country, things did not go as planned because most of the women farmers approached were either small scale farmers or were established in very small groups or sought material support more than knowledge and experience, which was all the EWAA could offer at that time. According to one of the first members of the association, Ms. Senait Tesfalidet, the call for membership of the association brought with it expectations of material support and group privilege by the farmers in the rest of the regions. But all EWAA could offer at that time was training and an introduction to modern agricultural practices. “It wasn’t easy, so we thought that it was going to take time and we shall wait on them. But in the meantime, we decided to work on solidifying the establishment that we had in Asmara,” Ms. Senait said.

The association has come across many challenges in the past 19 years. The challenges of each member being the challenge of the entire association, the EWAA has lost some of its most active organs of production in poultry due to lack of space and resources. This has significantly impacted the activities of the EWAA.

Another challenge that the EWAA had was lack of market. They had no market place where they could display their products. For instance, Ms. Senait was a farmer who mostly produced vegetables and herbs but had trouble distributing the products herself.

Some of the women make food stuff such as chili pepper, dried and crushed mushrooms and other spices. Mrs. Senait told us that she also tried to sell her herbal products raw at first but later designed ways to prepare her products in dried and more portable forms with no nutritional value lost from the organic products. She now has different types of herbal tea.

The experience and training have greatly helped members of the EWAA to build and integrate modern means of production and processing. There are groups within the association that specialize in certain types of production such as the mushroom group, the flowers group, the food processing group, the poultry group and the dairy group. However, their goal remains the same: to contribute to the development of the members and efforts to increase productivity to meet local needs. And they do it together and in harmony.

The association also works, as part of its agricultural activities, to identify plant species that might be of use to the nation. For instance, it has done extensive research on the introduction, development and processing of Aloe Vera and all the benefits that can be derived from the product.

The groups that specialize in mushrooms, aloe processing, food processing and raising rabbits were formed as a result of attending new training programs organized after the establishment of the association. The formation of the groups was mainly needs driven. For instance, the group of women farmers who engage in food processing was formed to deal with problems posed by perishable food products. That in itself is a form of development for the members.

Volunteers in varying fields, including management and business administration, have proposed to help the women in capacity building. Besides, members of the association that have taken training share their experiences and knowledge with other members. Training programs organized by the MoA help the members develop expertise on not only business and agriculture but also law. According to the members, all concerned ministries and bodies give positive support for EWAA whenever necessary. Ms. Senait said the most important support from the MoA is that of space and material support given to the Mushroom group, which is helpful for the development of the sector.

The EWAA calls upon young women to be part of the association. Ms. Senait said they need the young to join the association, but whoever wants to join has to be interested and be active in agro-business, has to have work experience of two years in the field and has to have an accumulated capital decided by the members. “We believe progress can be made only if we include our youngsters in our activities and the association,” Ms. Senait added. She pointed to the relentless attitude and physical and mental fitness of the young members that she believes is key for the development of the sector. The inclusion of youngsters in the association means strength and continuity for the EWAA.

Ms. Abrhet is one of the members of the EWAA. She is the owner of Zack Dairy and had formerly been active in mushroom production as well. She distributes her products to supermarkets, which she believes is a secure market for her products. She said that her being at the bazaar was to be supportive to her association, a promotion to the collective effort and encouragement that has gotten her going so far.

Ms. Abrhet had taken courses in China about the cultivation of mushrooms and started to teach others in the association, but she is now more inclined toward dairy production. Though the business was started by her late husband, Ms. Abrhet said the legacy of her late husband is now a family and EWAA’s business. When her milk production kept growing, Abrhet thought of starting to process it herself and is now one of the most famous in the dairy business in Eritrea. 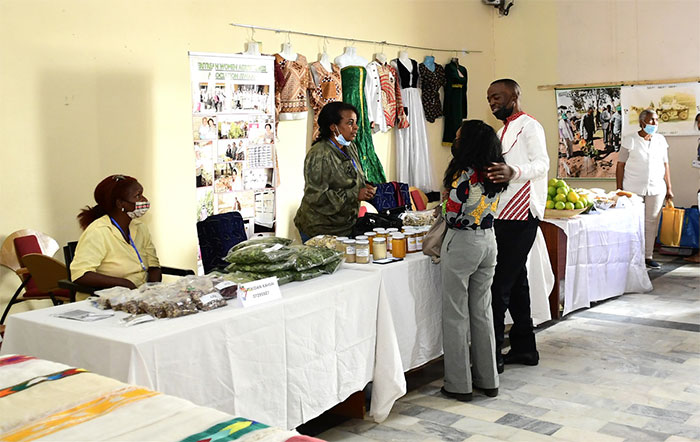 The MoA is the right hand of the EWAA, as is repeatedly mentioned by the members we interviewed. They constantly attend training programs which have helped the association to persist in harmony with all the challenges it faces. “The encouragement we get is the biggest input from the MoA and the people and groups around us,” Ms. Abrhet said.

This is an account of our short stay with some of the members of the EWAA in one of the monthly exhibitions held in Asmara. At the exhibition are displayed products of five groups that specialize in different fields and are organized by the National Union of Eritrean Women (NUEW) and other bodies.

One of the visitors at the exhibition, Mr. Thembani Maluleke from the South African Embassy, said “From the four times that I have been here, the products have been very diverse, including antiques, earrings, and organic food. They are all pure Eritrean products. So, that is how you grow the economy, with local productions. From small to medium and much bigger enterprises.”

I believe being involved in agriculture is being part of the most important task of the country. Likewise, I support extensive investment in the farmers at the bottom. Developing those farmers means developing the agricultural sector which has profound effect on the economic wellbeing of the society, food security and self-reliance.

The members of EWAA chaired by Ms. Selam Mekonen, are a group of harmonious and bright women who are colorful parts of the bigger picture of the food production in Eritrea. They support and encourage one another to develop and succeed together. At the end of our stay with the members of the association, the members told us their deep appreciation and gratitude to all those that supported them and have been on the side of the association from day one.

Members of EWAA say they are all mothers and when they produce, they produce as mothers. They want the food to be the type of food their children would be able to eat, nutritionally balanced. For the exhibition, they have now prepared peanut for salad, dried and crushed mushrooms, honey, yoghurt, mozzarella, dried parsley and dried rosemary, among others.