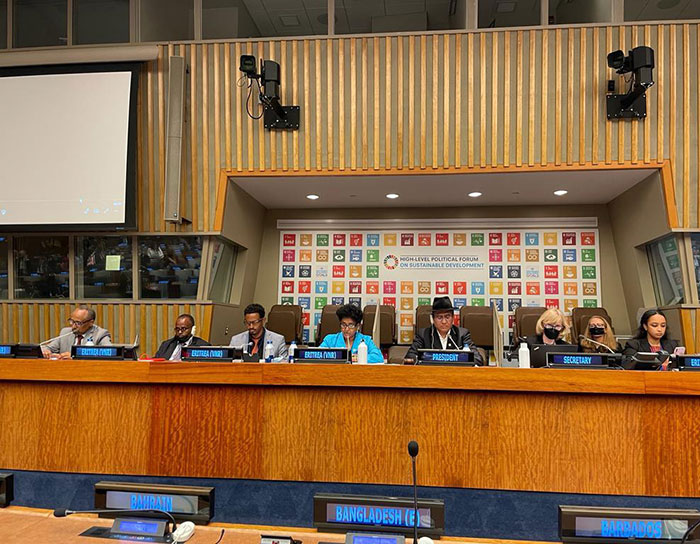 Note: This is the first article in a multi-part series that discusses Eritrea’s recent participation at the 2022 High-Level Political Forum and the country’s presentation of its first Voluntary National Review (VNR) report. Part I provides a brief overview of the VNR process and its overall significance, while also offering some important insights and general background regarding Eritrea’s preparation process.

During the first weeks of this month, an Eritrean delegation led by Ambassador Sophia Tesfamariam took part in the 2022 High-Level Political Forum on Sustainable Development (HLPF), convening under the theme, “Building Back Better from the Coronavirus Disease (COVID-19) While Advancing the Full Implementation of the 2030 Agenda for Sustainable Development”. Gathering in New York under the auspices of the United Nations Economic and Social Council (which is one of the six principal organs of the United Nations), the HLPF saw a total of 44 countries present their Voluntary National Reviews (VNRs) of implementation of the 2030 Agenda for Sustainable Development: 11 countries (including Eritrea) presented for the first time, 28 for the second, three for the third, and two countries presented for the fourth time (Togo and Uruguay). Further breaking down the participating countries by region, 21 were from the Africa region, nine were from Europe, seven were from Latin America and the Caribbean, and seven were from Asia and the Pacific.

In late September 2015, Eritrea, alongside all other 192 Member States of the United Nations, adopted the 2030 Agenda for Sustainable Development at the United Nations General Assembly. This global initiative is a powerful call to action for all countries – large and small, developed and developing – to end poverty, protect the planet, and ensure that all people are able to enjoy peace, equality, and prosperity. At the heart of the 2030 Agenda are the SDGs, a diverse collection of 17 comprehensive, closely interconnected goals, further broken down into 169 targets, to be achieved by the year 2030.

As a cornerstone of its follow-up and review mechanisms, the 2030 Agenda for Sustainable Development encourages all Member States to “conduct regular and inclusive reviews of progress at the national and sub-national levels, which are country-led and country-driven,” and also “take into account national realities,” recognizing that “country ownership” is central to the implementation of the 2030 Agenda. Furthermore, the 2030 Agenda stipulates that these regular reviews are to be voluntary, undertaken by both developed and developing countries, and involve the active participation of major groups and other relevant stakeholders. Other important recommendations are that it is to embrace all dimensions of sustainable development and look at the means of implementation, as well as be evidence-based, built on sound data sources, and pursue a multi-track approach.

The core of the VNR process involves countries assessing and presenting their progress in implementing the 2030 Agenda and achieving the SDGs. VNRs provide an important snapshot of where countries stand in the implementation of the SDGs, with a view to help accelerate progress through experience sharing, peer-learning, identifying gaps and good practices, and mobilizing partnerships.

Taking stock after the conclusion of the recent July 2022 session, the HLPF has now heard a total of 292 VNR presentations from 187 different countries since the reporting process first began back in 2016. (Countries that have not yet conducted and presented a VNR since the process began in 2016 include Haiti, Myanmar, South Sudan, the United States, and Yemen.)

Once countries have formally submitted and presented their VNR, their reports are published in a global VNR database where they remain freely accessible to the general public.

VNRs are much more than a basic report or simple end goal. In addition to assessing and tracking progress on implementing the 2030 Agenda and achieving the SDGs, VNRs are important for a wide range of reasons. For instance, the in-depth review and preparation procedures that are an integral part of VNRs require a coordinated effort and for many countries, the institutional arrangements made have proved useful for SDG implementation. The VNR process can also strengthen local or national ownership of the SDGs, while work conducted by international organizations has found that the VNR process can be an “important engine” for countries to accelerate SDG progress (especially if strong follow-up processes are in place).

In addition, the VNR preparation process encourages the meaningful engagement of an array of stakeholders, while as a tool for accountability at both the national and global levels, the VNR process promotes openness and transparency. Importantly, the VNR exercise creates channels for sharing knowledge, best practices, and common challenges. What is more, reporting mechanism, characterized by its frequency and comprehensive, detailed format, leads to an accumulation or substantial body of important lessons that can encourage other countries to follow suit or set standards for the international community.

Finally, the process can be an effective mechanism for identifying gaps and communicating the areas in which countries require more work or support for implementation, adjusting national development policies and activities, and mobilizing multi-stakeholder support and partnerships.

Eritrea’s completion of a VNR and its participation in the HLPF process are a powerful testament to the country’s enduring commitment to achieve its multifaceted development goals and tangibly improve the lives and general wellbeing of all of its people.

The country’s inaugural VNR process formally commenced with an expression of interest communicated to the President of the United Nations Economic and Social Council in 2021. A central factor underlying Eritrea’s decision was the genuine desire to remain actively engaged and contribute within the framework of mutual exchange and learning. Furthermore, through participating it sought to strengthen and consolidate national and local ownership of the 2030 Agenda, promote awareness, build a strong platform for future improvements, and accelerate its overall development progress.

The national review process and development of the VNR report were locally-owned, highly collaborative, open, and transparent, in addition to being participatory and all-inclusive. Under the guidance of the Ministry of Finance and National Development (MFND), a multi-institutional National SDGs Taskforce (NST) was established to provide direction and oversight for all processes leading to the VNR report. Led by the National Statistics Office (NSO), the NST was composed of high-level focal points from the MFND, Ministry of Health (MoH), and Ministry of Land, Water, and Environment (MLWE), along with representatives from the Office of the United Nations System (UNS) in Eritrea.

The NST prepared and approved a comprehensive concept note, a detailed roadmap and working plan, the terms of reference and outlines of the report, and all other technical engagements related to the entire review process. In line with the decision to prioritize reporting progress on SDGs 3 and 13, it also commissioned two thematic working groups, headed by senior experts from the MoH and the MLWE, and comprising members from 23 stakeholders, including ministries, departments, local authorities, and civil society organizations, to comprehensively review and report national progress on goals and targets. Throughout the duration of the review process, the UNS in Eritrea remained highly engaged and it extended technical, logistical, and financial support.

In-depth consultations were convened at regular intervals, and they included the substantive involvement and critical contributions of a broad spectrum of stakeholders at the national and sub-national levels. Participants included local authorities, representatives from different ministries and national unions (including those representing youth, students, women, and workers), and officials from various agencies of the UNS in Eritrea.

Throughout the duration of the preparation and review process, the NST and its concomitant thematic working groups closely adhered to the practical recommendations and guidelines outlined in the “Handbook for the Preparation of Voluntary National Reviews” developed by the Division for Sustainable Development of the United Nations Department of Economic and Social Affairs. Additionally, members of the NST and working groups benefited from several formal preparatory activities, including a series of multi-day regional and global workshops. These were complemented by a local sensitization and training seminar organized and delivered by the MFND and the United Nations Development Programme in Eritrea to members of the National Union of Eritrean Youth and Students.