The Essence of Stone Monuments in Eritrea´s Antiquity 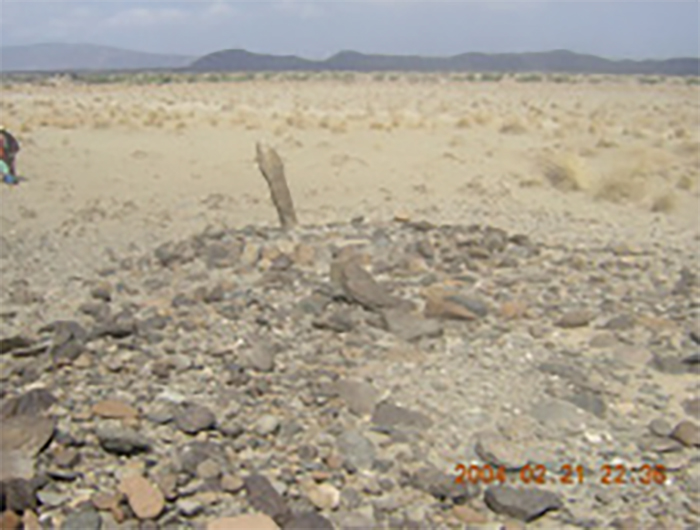 The comprehension of social relations through the window of monumentality features one of the key aspects of archaeological studies. The presence of monumental features and particularly monumental tombs and ceremonial structures in the landscape help archaeologists understand the organization of social landscapes in archaeology. These studies provide insight into subsistence, domestic economy, and mobility. Monumental structures also appear to lend themselves more readily to discussions about social relations, as spaces of social inclusion and exclusion, large-scale exchanges of concentrating resources, or containers of social markers.

The northern Horn of Africa is a juncture of major crossroads in antiquity where a cultural history without a hiatus delimits the dynamism of the past in the region. The geographical scope constitutes the Eritreo-Sudanese lowlands in the north and west, the Denakil Depression to the east, the Red Sea to the northeast, and the Eritrean highlands, as well as the adjacent plains delimited by the Tekezze River. The inclusion of these ecozones in the nexus of major trade routes in the late prehistory of the region is evinced by imprints of the development of early complex societies in the environmental mosaic.

Bringing the discussions of monumentality to the Eritrean context, this article will provide a synopsis of mega-stone structures distributed over much of the western lowlands and Denakil Depression of Eritrea and link them to similar evidence in the northern Horn and the adjacent Arabian Peninsula. The western lowlands of Eritrea and the Denakil Depression are known to have a long human history. When traveling through the lowlands, these regions do not appear to be very promising for the study of prehistoric archaeology. On closer examination, however, even the untrained eye can see numerous scatters of burial tumuli and other evidence of human occupation. The emergence of regional ceremonial centers with mega-stone alignments as well as stone circles, thus, becomes important to understanding patterns of population dynamism in our region. 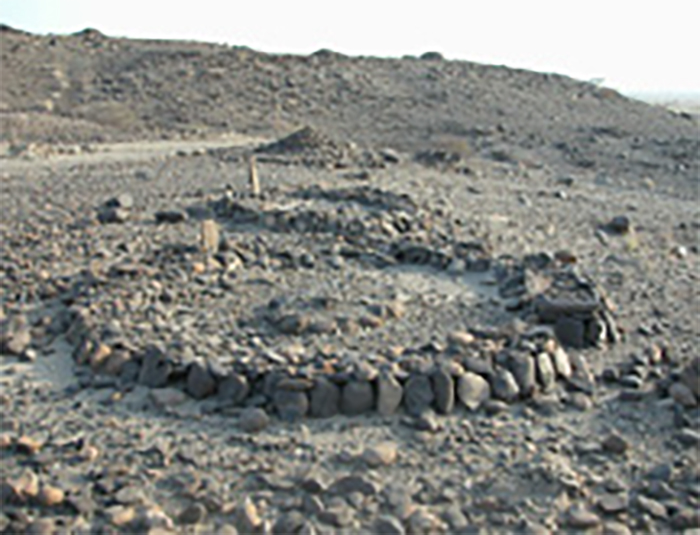 The documented megalithic sites in Eritrea and their possible contemporaries elsewhere in the Horn of Africa and in Tihâma demonstrate that the stone monuments and tumuli had a funerary and symbolic function. The major intent of the evolution of the structures and associated cultural manifestations is the act of remembrance of the deceased imparted by the representation of the space as a sacred entity. It is that a certain level of social complexity had to have existed in order for there to have been a need to remember and venerate certain individuals in a certain way. The creation of monuments and proper graves/ symbolic centers is, in essence, a “construction of ancestor hood” still shared in contemporary societies of western lowlands and the Denakil Depression. This trend further reflects an increased organization in society and induces memory, which in turn ties humans to a space and to land.
Territoriality is established by leaving a mark in the form of a monument and spatial delimitation ties a society symbolically through the representation of ancestorhood in a binding communal identity.

Identification of villages and territorial lands to the makers of the mega-stone elements and the presumed genealogical progeny of contemporary societies in western lowlands and Danakil during the Depression elucidates the phenomenon. These monumental stones have never strayed far from their primary resting places, not only because they are difficult to move but also because the presence of the stone in that particular place renders both the size of the stone and its context evocative. In either instance, the erection of stone monuments and particularly at such a distance from their origin remains a source of inquest and appreciation among the populations that directly superseded the megalith builders. Thus, megalithic elements in the northern Horn of Africa, and the Denakil Depression as well as western lowlands of Eritrea, as a matter of fact, demonstrate recreation of the landscape across generations, by engraving it into the memory of the population of the region. 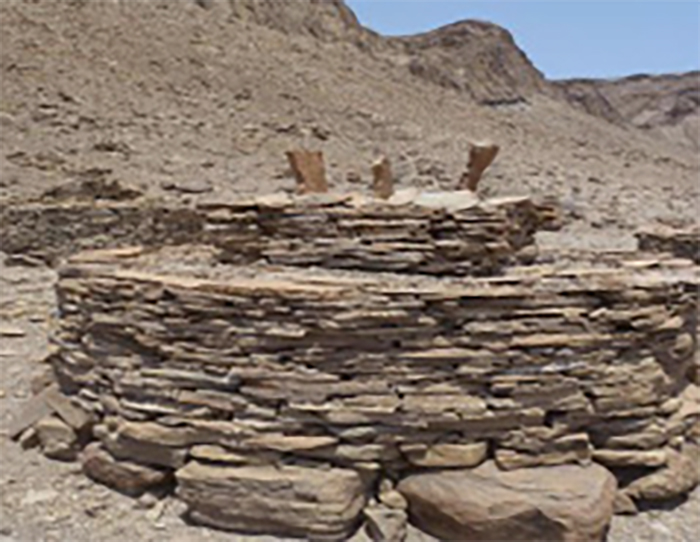 A number of hypotheses can be drawn to surmise the genesis of megalithic elements revolving around territorial affirmation including space marking as well as control and manifestations of increasingly organized societies and denser demographies.

The climatic changes in the northern Horn of Africa most likely followed the general trend of moist and dry fluctuations known from northern Africa during the Holocene. The available evidence suggests that modern climatic and rainfall conditions were established by the second millennium BCE. A minor humid pulse occurred between 500 BCE and 500 CE. The evolution of cultures from late prehistory has been clearly demonstrated in the culture-history, and megalithic elements can be understood in line with social complexity that emerged with the inhabiting of the Eritreo-Sudanese borderland by the Gash pastoral groups in the Western lowlands during the late third millennium B.C. Subsistence patterns of pastoral economies, as well as agricultural production, emerged with the migration of these groups to the region and evidence from Agordat attests to a natural habitat of Sorghum, a cultigen domesticated by these groups, which is used till present in the region.

Rock art sites of humped and humpless cattle displaying different styles, indeed, support the pastoral economy by the late third millennium B.C. The affinities of Agordat sites to sites along the Nile also need to be understood at the regional level as evidence from burial sites in the Nile provides evidence to elaborate burial practices that set the ground to formulate hypotheses and investigate the tumuli structures in western lowlands in a regional scale. The presence of numerous tumuli in the western lowlands indicates a population complexity and large burial mounds not only attest to densities but also evolution and elaboration of burial patterns. Circular structures interpreted as markings of pastoral routes are indicative of the relationship of subsistence to the landscape and symbolically connote social organization in the pastoral economic niche. Similarly, indications of a material culture dominated by obsidian and linking settlements in the Denakil Depression to the Arabian Tihama and later to the Eritreo-Sudanese borderland evince settlement complexity which can be understood not only in terms of interregional trade but also by the monumentality of the landscape. 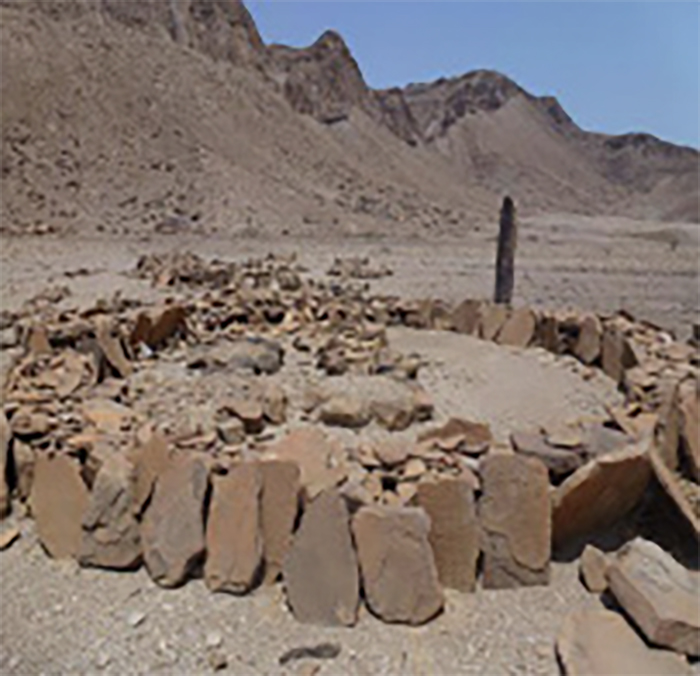 In summary, the nature of megalithic elements in the western lowlands of Eritrea and the Denakil Depression needs to be understood in light of available regional data amid a lack of direct chronologies from the burial sites. Reference to sites in Eritreo-Sudanese lowlands and the Arabian Tihama necessitate the association of dating sites in western lowlands and trade materials from the Denakil Depression in an attempt to draw parallels.

It should be noted here that megalithic elements can only be understood in line with a complex array of developments in the Holocene including climatic changes, rise of pastoral subsistence, agricultural production as well social complexities of inter-regional exchange involving physiographic niches in the northern Horn of Africa and neighboring Arabian Tihama. The megalithic structures and elements in Eritrea are at present defined in what can be said a rudimentary position, and relative to regional contexts. Standing in arid and savannah fringes of the northern Horn of Africa, as reminiscent of the region`s past and lying at geographic as well as cultural interfaces, both hybrids of the elements from western lowlands and the Denakil Depression, are composed of elements pertaining to the different ecological zones bordering them, the Eritreo- Sudanese borderland and Arabian Tihama respectively.