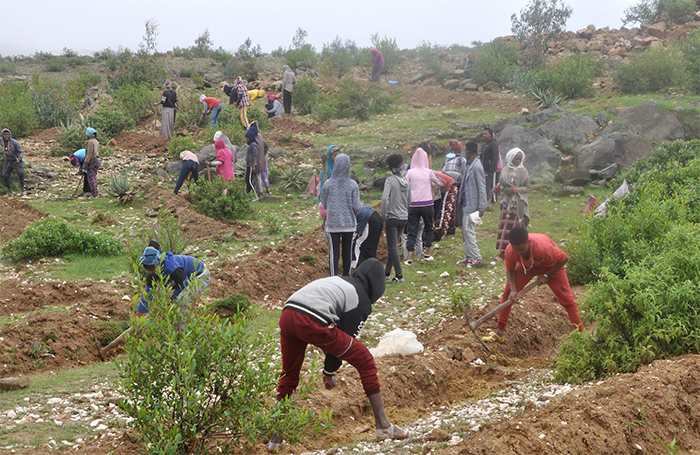 Last week, local print media and radio outlets reported on ongoing development activities in Berik sub-zone, located within the Central Region. For the past several months, the residents of 21 villages in the area have come together at regular intervals to conduct a range of soil and water conservation projects, as well as to carry out greening activities. To date, about 1200 hectares of terraces and around 1350 meters of water diversion schemes have been constructed. In addition, approximately 250,000 tree seedlings have been planted in different areas throughout the region.

As well as being a generally positive, overall “feel good” story and quite inspirational, the recent reports about the ongoing community campaigns in the Central Region provide a useful opportunity to briefly discuss a few important environment-related points.

To begin, it is worth underscoring how these people-centered, holistic community campaigns, which have been conducted for many years and take place in communities up and down the entire country, play a positive role in practically addressing a number of pressing issues, as well as provide a range of significant benefits.

For instance, terracing, which involves constructing ridges and channels on sloping lands, helps to promote the conservation of soil and water (recall that fertile soil and water are especially critical resources in Eritrea and throughout the wider region). It can reduce both the amount and velocity of water moving across the soil surface, which greatly reduces soil erosion and ultimately allows for more intensive cropping than would otherwise be possible. Meanwhile, water diversion, which is an age-old practice, helps to reduce water quality degradation, supply irrigation systems, promote access or effective use, and reduce or prevent widespread destruction caused by flooding. Finally, the planting of trees and central focus on afforestation is helping to capture carbon dioxide, reverse decades of deforestation, drought, and land degradation, restore ecosystems, halt the rapid advance of climate change, and promote climate resilience.

Beyond the above-mentioned impacts, however, there is a range of other substantial, albeit frequently overlooked, benefits associated with these community activities. For one, the initiatives help to keep participants actively involved and positively engaged within their local communities and also allow them to closely connect with the natural world, all the while offering useful lessons, new insights, and unique experiences. By exposing individuals, especially young people, to nature and allowing them to be active in an outdoor setting, these activities can also foster sensitivity, appreciation, and respect for the environment and the natural world. Notably, there is a growing body of empirical research that indicates how increased environmental knowledge or general awareness is closely linked with environmental friendliness and conservation behavior, while greater exposure to nature may provide a variety of cognitive, behavioral, and health benefits.

Not to be overlooked, in the process of bringing together diverse people from all segments of society in order to work toward a common goal, community initiatives can also have a powerful influence on fostering peace and cohesion. In particular, exposure to and interaction among diverse individuals and groups can promote openness to alternative views or perspectives and strengthen mutual understanding, trust, tolerance, and harmony.

Another critical issue underlying the community environment campaigns is that of climate justice, which is an increasingly important topic of discussion worldwide.
Without a doubt, climate change is one of the most significant challenges ever faced by humanity. Globally, there is not a single country that is not experiencing the drastic effects of climate change. It is disrupting national economies and affecting lives. Weather patterns are changing, sea levels are rising, and extreme weather events, such as heat waves, droughts, floods, and tropical cyclones, are increasing in frequency and intensity. This aggravates water management, reduces agricultural production and nutrition and food security, increases health risks, and interrupts essential services, such as water and sanitation, energy, and education. 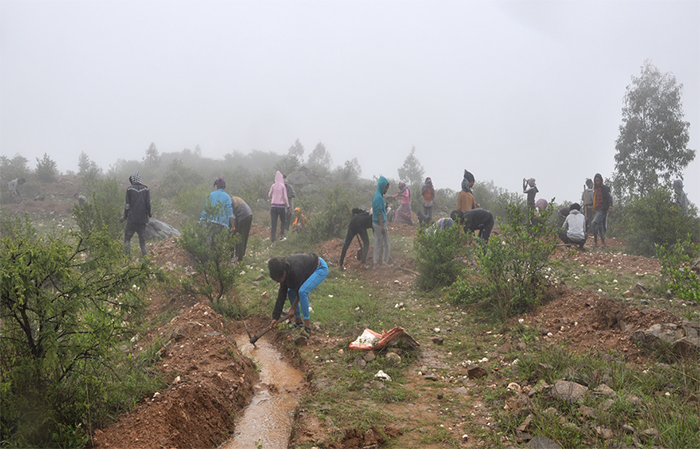 While climate change and its impacts affect people everywhere, they disproportionately harm the poorest and the most vulnerable, especially women, children, the elderly, and persons living with disabilities. Moreover, the impacts of climate change are felt most by those people who are least responsible for rising carbon emissions and global temperatures – particularly those in Africa. The continent is the most vulnerable to climate change despite being responsible for just 4 percent of global carbon emissions.

For Eritrea, annual greenhouse gas (GHG) emissions remain relatively low and there are only small fluctuations per year. In 2018, GHG emissions were approximately 6.396 megatonnes of carbon dioxide equivalent (Mt CO2 eq.), about a 20.17 percent (or 1.073 Mt) increase from 2000 emissions and a slight decrease of 0.37 percent (or 0.0237 Mt) from 2015 emissions. Overall, the country accounts for among the smallest global shares of total global GHG emissions.

For years, Eritrea has been making considerable efforts and investing resources toward climate adaptation, risk reduction, and disaster rehabilitation. It has signed and ratified a number of international climate change agreements and alongside the nationwide community environment campaigns discussed above, an array of adaptation and mitigation efforts are also underway, with the close cooperation of regional and international partners. These include the establishment of enclosures and protected areas and the development of plans for the desalination of seawater for domestic and economic sectors. Households and communities, especially those in at-risk areas, receive support with adaptation strategies and technologies, helping to reduce vulnerability, strengthen resiliency, and secure livelihoods. In addition, renewable energy is being prioritized (which will help to minimize the dependence on unsustainable imported fossil fuels and reduce emissions from national power generation), while steps are actively being taken to improve energy efficiency and promote clean alternatives in transport, manufacturing, and household consumption.

While all of these efforts and initiatives are certainly significant, noteworthy, and much-needed, it is vital that we keep in mind a fundamental point. So many developing countries, especially in Africa and including Eritrea, are bearing the brunt of the impact of climate change. These countries should be supported, while the burdens and benefits of climate change and its resolution must be shared equitably and fairly worldwide fundamentally, those who have contributed most to the current problems have the greatest responsibility to help resolve them.