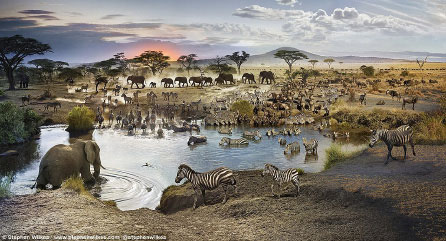 Mammals are among the most adaptable animals on the planet. They are found on every continent and in every ocean, and range in size from tiny bats to enormous blue whales. The basic body type is a terrestrial quadruped, but some mammals are adapted for life at sea, in the air, in trees, underground or on two legs. The largest group of mammals have placenta, which enables the feeding of the fetus during gestation. With the exception of the five species of monotreme (egg-laying mammals), all modern mammals give birth to live young. All these five egg-laying mammals are found only in Australia and New Guinea.

Mammals are among the most successful groups. One of the main reasons for their success is the way they move. As a group they use every possible form of locomotion. Terrestrial mammal species walk, run, jump, climb, hop, swing, dig, and burrow and the aquatic ones swim, shuffle, and dive. A few of them even fly. Their diet and behavior vary. Some are carnivores (meat eaters), others herbivores (plant eaters) and many others are omnivores (meat and plant eaters). Many carnivores are top predators and live generally solitary lives like, jaguars, tigers, and polar bears. In contrast, lions, otters, wolves, and dolphins live in family groups. Some herbivores have more social life, especially hoofed animals like deer and zebra. These mammals, by living in large groups, gain both protection against becoming another animal’s meal and more opportunities to breed. Among omnivores, primates are known for their high intelligence and rodents for their high numbers.

Mammal bones, especially skulls, are used for identification and to work out the evolutionary history of each species. For example, the jaws of a domestic cat are more lion- than wolf-like. The teeth of horses and zebras look similar. The ear bones of mammals were once the jaws of prehistoric reptiles. And so on. However, despite these differences, all mammals share four traits. These include: hair, mammary glands, a hinged jaw, and three tiny middle ear bones. In addition, most mammals have specialized teeth and moveable external ears.

The Old World tropics –Africa, South and Southeast Asia, and Oceania – were relatively safe when severe extinctions occurred around 1.0 million years ago. As a result, today, the Sub-Saharan Africa and southern Asia are the only regions that have terrestrial mammals weighing over 1000 kgs. However, there are indications of large mammal extinction events in the tropics around 2.0 million years ago, which coincide with key stages of human evolution and climatic trends. The continents of Africa and Asia, as the centre of human evolution and expansion, were inhabited by advanced hominids by 2.0 million years ago, with Homo habilis in Africa, and Homo erectus in both continents.

Throughout the evolutionary process various mammals became extinct, whilst others have been replaced by their modern descendants. A mammal species is extinct when the last existing member dies. As long as species have been evolving other species have been going extinct. It is estimated that over 99.9% of all animal species that ever lived are extinct. Extinction, therefore, becomes a certainty when there are no surviving individuals that can reproduce and create a new generation. There are a variety of causes that can contribute directly or indirectly to the extinction of a species or group of species. As American biologist Stephen C. Stearns said, “the causes for each extinction are varied – some subtle and complex, others obvious and simple”. However, the simplest argument is any species that cannot survive and reproduce in its environment and cannot move to a new environment where it can do so, dies out and becomes extinct. Generally, the average lifespan of a species is estimated to be between 1.0 to10 million years.

The Eritrean Danakil Depression was home to diverse mammals millions of years ago. This geological platform of the East African depression, at the intersection of the Red Sea, the Gulf of Aden and the East African Rifts is known for its huge role in the evolution, dispersal and extinction of mammals. Today, an extensive geological study within this area demonstrates, sedimentary layers are preserving bountiful evidence of fossil bones of large mammals, some of which are totally unknown today. 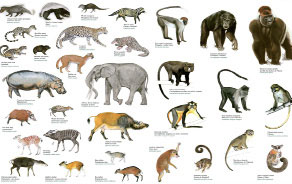 The geological setting of these areas shows the environment of the Buia area was dominated by alluvial fans and high energy streams, with some swampy to lacustrine ponds, which are favourable for mammals to dwell in. In addition, several studies have indicated that today’s desert and inhospitable area of Buia was once characterized by the availability of freshwater ponds and grassland (savanna) environments on adjacent coastal and flood plains. Recent Isotope study further demonstrated the presence of a temporarily and restricted lake in the area during the Pleistocene epoch (2.0 million to 10,000 years). These environments developed along the coasts just after the lacustrine regressions allowed the setting of favourable conditions for mammals, including humans, to thrive. The fossil record shows, the wide range of the Buia basin has been inhabited with diversified fauna and hominins for the last 1.0 million years. At present, the Eritrean Danakil is attracting the attention of many researchers for its huge potential information related to evolution and extinction of mammals. So far, it has been known that large mammals inhabited large territories of the Eritrean depression along different humans. The majority of these mammals known from the fossil record in this area are totally different from the animals known today.

More than two decades of scientific studies at the Eritrean Danakil depression show diverse evidence of the existence of mammals about 1.0 million years ago. Among these include, three different species of pigs, hippopotamus, elephants, horses, gazelle, rhino, giraffe, a unique species of extinct genus of African wild cattle and a Homo erectus like human species. Apart from these, evidence of large carnivores of Hyenas is documented from this area.

The presence of such diversified species of mammals at the Eritrean Danakil Depression reflects to a mosaic type of ecosystem around 1.0 million years back. In this ecologically diverse habitat mammals were facing the harsh fluctuation of environment known to have occurred around 1.0 million years ago. As a result they had to compete for their daily diet and life. Today, descendants of those who were able to deal with such evolutionary challenges survived till present but others became extinct. This process refers to the fundamentals of evolution, “animals which are most suited to their environment are those which are best fitted to survive”.