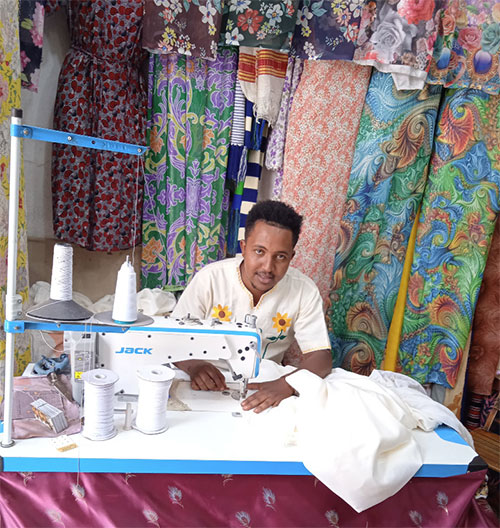 Our guest today, Henok Kidane Tewelde, has been named “best designer of the year.” He works with the staff administration at the Ministry of Defence in Beleza. Through his work, Henok attempts to tell the world the Eritrean story.

It was a ‘national design competition’ held under the theme “National Trademark for Development”. It had many participants, competitors and spectators. It was special as it was the first of its kind. It was held at the beginning of 2022, when rules about public gatherings due to Covid-19 were relaxed. 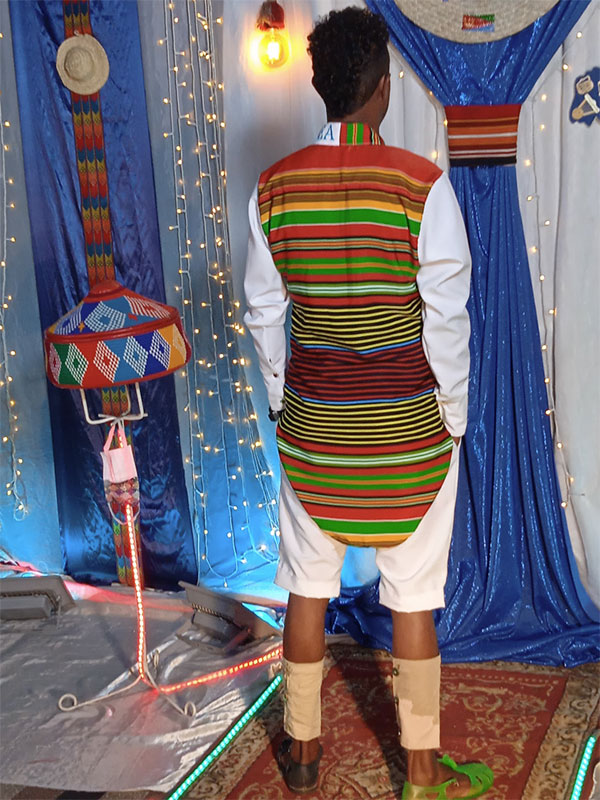 New events trigger new ideas. Covid-19 created new ground for us that had never been done in our country. Due to the restrictions associated with Covid-19, instead of using models we had to put the clothes we made on dolls that were put on display for almost 13 hours. This gave the public an opportunity to take time, see and feel our work.

And the evaluation of the works was given in three ways: in the form of text voting, by which we, the competitors, received more than 5,000 responses; in the form of comments given by the viewers at the exhibition; and in the form of feedback received from YouTube viewers. The contestants’ products were displayed in the “Textile Development Network” channel of artist Fitsum.

I have always wondered why we wear clothes with foreign brands and ask why we don’t have clothes that bear Eritrean brands. So, based on the theme used for the competition I worked to make my dream come true by making a cloth that is modern but can represent our country’s values.

The top had printed on it the historical Eritrean picture of five fighters holding the axis of a flag and several designs which represent the six regions, the sea and the ethnic groups. The shoes and trousers have an additional message. The right side of the trouser has EPLF’s (Eritrean People of Liberation Front) flag while the black kongo is a reference to the plastic sandals worn by freedom fighters. The left side of the trouser has olive leaves that are found in the national flag and the green kongo and a legging made of military cloth represent our courageous warsay-yikaalo.

The back of the cloth is made of a cloth known as “abdelakan”, worn by our eight ethnic groups. I decided to make it at the back to depict their service as stronghold of many courageous citizens. The ninth ethnic group is represented by white traditional cloth. The white color also represents the consciousness and innocence of our people.

I wouldn’t have been able to complete my work had it not been for the help of designers Abraham Sultan, Teklu Weldeab, and Henok Shewit, and, most importantly, Colonel Belay who helped me with the printing.

Considering the time limit I had to make the cloth, I was surprised and happy. The moment I received the certificate of award, with ‘golden award to the best designer of the year’ written on it, I realized it was more of a burden than only an expression of success because I understood that big achievements lead to bigger demands and expectations.

I initially got introduced to fashion designing thanks to needle and line. As a student, I remember while walking to school staring at cloths shops such as HT Fashion shops open mouthed. It is then that I intended to give it a try. The ambition I had at that time really had an impact on my growth as a designer.
I started with traditional clothes and became fond of our country’s traditional clothes. With the little experience I gained, in early 2019 I started sharing my ideas and experience with experts in the field. With their encouragement, especially that of designer Abraham Sultan, I joined the Eritrean Designers Association which operates under the auspices of the Commission of Sports and Culture.

I believe that dignity is found within a society’s tradition. I become envious every time I see pictures in magazines or the internet and wish that our traditional clothes reach the same level.

Confidence comes with experience that can be gained on your own and through exchange of ideas with skilled people, especially those in your field. Design, for me, is a wisdom gifted to us by God. Initially it is generated in the designer’s mind. In order to keep it alive, it needs hand from several professionals. Designing by its very nature is a team work. Therefore, it is your dedication to what matters most to you and unity among the team that leads to great achievements.

To compete in international competitions and be influential.