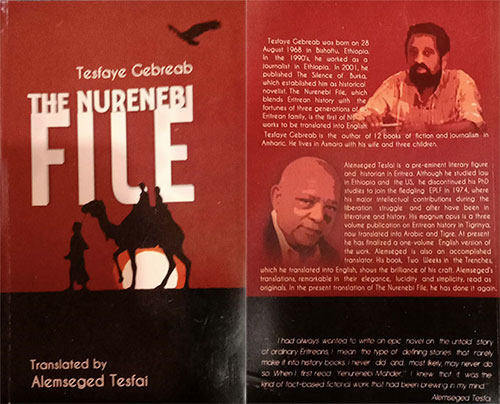 The Nurenebi File is a well-researched, widely-praised, fictionalized book of history that traces the fortunes and misfortunes of the Nurenebi family right from their village, Fana (Halhal Bogos), at the outset of Italian colonialism, and all the way through to Mekonen’s martyrdom and Eritrea’s independence. It is a must-read book.

In this book fictional episodes are in play to spice up the real story, keeping the reader hooked on right to the end. If I had known that these documents existed, I would have sent a burglar over and stolen them from the youth. Such was the enthusiasm and commitment with which Mr. Tesfaye Gebreab embraced the idea as he mulled over the bits and pieces of documents entrusted to him by Debessay (great grandson of Nurenebi).

And as this great book, now in our hands, attests, the writer has succeeded, with aplomb, weaving the rudimentary facts into a magnificent work of history.

However, as is often the case with many book lovers, we, for the most part, seem reluctant to commit to a reading of purely academic nature, packed with facts and figures. But Tesfaye Gebreab has worked his way around this. Hence, in The Nurenebi File, he resorted to a shrewd ploy to entice the reader into the party. And this was done by choosing a dazzling title for the book.

This has sort of increased the readers’ appetite to find out more about the Nurenebi family.

And in my case, I had the added impetus to trace the history of the Nurenebi family as I happen to hail from the same ancestral background (Tawqe).

On the other hand, the facts and fiction are so intertwined that there are instances where the reader is at a loss to tell what aspects have been fictionalized.

Generally, when reading a book, one often harbors an element of expectation and the book’s title is always the point of reference. In this book, as one delves deeper into the pages, it becomes increasingly apparent that The Nurenebi File is a prodigious book of history but not necessarily about the Nurenebis as the book’s title suggests.

As the pages would attest, the Nurenebi’s tale is interspersed as follows:

A- Right at the start where they leave their village (Fana) fleeing the rampaging drought, and heading for Massawa in search of sustenance.

B- Pages about the Nurenebi’s first days in Massawa and the ‘pigro’ incident that was the catalyst for the fortunes and misfortunes that befell the Nurenebis.

D – And finally the pages about Mekonen “Amharai” (Gabriel’s son) joining the armed struggle for the independence of Eritrea.

As for the rest (the bulk) of the book, it is mainly about Italian colonial ambitions in the region, Ethiopian chieftains, Ethiopian feudalism, the ever-shifting tribal allegiances and alliances, the incipiency of Eritrean nationalism…(Bahta Hagos was one of the main protagonists)..

In other words, it is more about Bahta Hagos, Iyasu Yacob, Menelik, Abba Yohannes, Haile Selassie, Mario Visintini (Black Eagle) and less about the Nurenebis.

When all is said and done, this book does offer a fresh and a unique historical perspective accompanied by entertaining narration.

There are instances where Tesfaye Gebreab has portrayed some situations with a touch of art that inspires imagination. As an example, we can mention Nurenebi’s first encounter with Massawa’s urban life that, as we have seen, was the catalyst for a series of events that set the Nurenebi family in a totally unforeseen path in life (like changing religion, getting better education that stood them in good stead for employment and acquiring a wider and better perspective of the world).

Here, the reader is offered an insightful portrait of a villager’s cultural shock when faced with unfamiliar cosmopolitan culture. Nurenebi was obviously overawed by the spectacle of ships docking and undocking. And to make sense of his new surroundings, Nurenebi had to mentally convert them into things familiar to him. So, he likened the ship to a camel, a boat to a calf. Only then did things make sense to him.

But there is one thing that Nurenebi could not find a matching concept for. Something that didn’t exist in his repertoire of rustic culture. And that was the word ‘pigro’ that was casually hurled at him by some Italians.

His answer to that condescending insult was to take up arms (ጣምቢሉ) and to try to redress the issue of white man arrogance, singlehandedly. Mind you, Nurenebi was not the first to be called a ‘pigro’ but others didn’t make much of it. But for a villager like Nurenebi it was a matter of pride.

Also, the case of Meriem merits a pause! It is an odd one. Was it real or a fictional character?

This is because back then, before the advent of the Italians, it was inconceivable for a village woman from a conservative background to leave her village (Fana) and travel to Massawa in search of employment. She would have struggled to get as far as Keren let alone Massawa, considering camel was the only means of transportation.

Besides, how did Nurenebi find out about her presence in Massawa? Back then there was no mail service. If Meriem was a male it would probably have made sense.

Another interesting reading was the encounter between Gabriel Edmondo and Commandatore San Marco and the ensuing intellectual and civilized discourse between the two, free of pressure. In the great scheme of things, it was one of the highlights not just in the book but for the Nurenebis as well.

It delineated Gabriel’s political maturity, his worldview and what he stood for as far as the Italian colonial ambitions in the region was concerned. He didn’t mince his words. He was totally against the Italian invasion of Ethiopia. Not necessarily that he was an Ethiophile (lover of Ethiopia), nor did he condone feudalism. But in his view, Ethiopia at the time was the symbol of freedom in the continent. And so it should remain free of any European colonialism.

Gabriei had another reason for opposing Italia’s invasion of Ethiopia. And that was because Eritreans were to be used as cannon fodder for the Italian military adventures. He was looking at the bigger picture. Gabriel’s worldview contravened the Il Duce’s belief that justified colonialism in Africa as a moral obligation to bestow modern civilization. This was a brave stand for which Gabriel had to pay a price.

The fictionalized instances were mainly used to enhance the flow of the narration. So from time to time we come across emotions, folksongs, poetry, tragedies, daughters, tears, facial expressions, hopes and despair. These fictional additives have by no means undermined its historical contents. In fact, they helped accentuate the facts.

Finally, I believe that to restrict The Nurenebi File to a given family will do no justice for the book or the author. After all, this is a book of great historical significance that spans an important period in the history of Italy, Ethiopia and Eritrea.

This is an invaluable documentation that should be read by new Italian and Ethiopian generations. Moreover, it is a great reference material for historians, academicians and researchers. I believe that with a relevant book title, this book could become a very popular one in Italy and Europe as a whole.

Finally, a little note about the translation. Translating from one language to another is a mammoth task that poses an enormous challenge. The challenge is about how to avoid over representing or underrepresenting the subject material. In this respect, Alemseged has done an admirable job.

I stood in awe of his sublime mastery of English as well as his amazing repertoire of vocabulary. And the number of times I scrambled for my dictionary were not few, I have to admit. However, the use of simple and common used words is preferable.

Press Release : Blaming the Victim and Saving the Perpetrator Under the Mantle of Human Rights