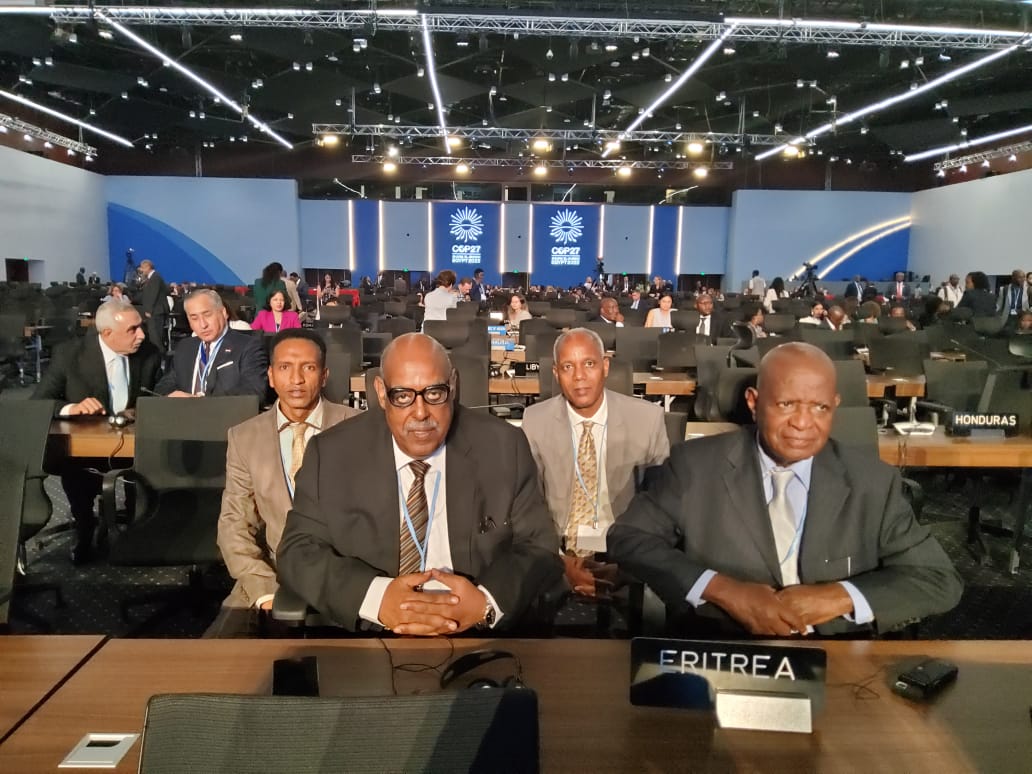 On behalf of the Eritrean delegation, I would like to join predecessor speakers in thanking the people and government of the Arab Republic of Egypt for the generous hospitality accorded to us since our arrival here in this beautiful city of Sharm Al Sheikh, and congratulate them for the wonderful job they have done to host UNFCCC-COP 27 and for assuming the presidency of the same.

COP 27 is taking place thirty years after the Rio Earth Summit that culminated in the three significant conventions of UNFCCC, UNCCD and UNCBD with a commonly shared objective of protecting our planet Earth and the integrity of its delicate ecosystem against damages wrought by human activities.

To us, the said conventions represent humanity’s solemn vow to reconcile with its conscience and nature and through sincere partnership to deal with all forms of past and ongoing injustices and excesses.

Notwithstanding the optimism-inspiring said objective and many promises made in subsequent conferences of the parties, as well as the ever-growing concerns and demands of billions of people, it is distressing and dismal, to say the least, that actions taken so far have not been commensurate with the gravity of the existential threat the world is facing due to global warming and overall environmental degradation.

IPCC recent assessment reports are worrying. They indicate cumulative emission reduction pledges and other mitigation measures fall far short to hold average global temperature increase at 1.5 degree C, target for which, the Paris Agreement has been much acclaimed.

As climate tipping points are crossed every year, raging cyclones, torrential tropical rains and melting glaciers and polar ice that loosen deadly floods, droughts that destroy crops, sea level rise, wildfires that devastate forests, and biodiversity losses have already become common occurrences. And the attendant human sufferings and damages are getting ever unbearably colossal and catastrophic. Yet as repeatedly referred, science has shown us not only how the world got into the present climate crisis, but also the way out.

Eritrea’s emission has ever been very negligible and because of our geographic position and lack of adaptive capacity, we have been among the countries most impacted by climate change.

Cognizant that the fight against global warming and environmental degradation is about doing everything what it takes to save our irreplaceable planet Earth and life that we know, in all conscience, my delegation strongly believes that every party have a role to play, however differentiated, to win the fight.

In this regard, I would like to bring to the attention of this august gathering, that in concurrence with what can be expected of my country Eritrea, we have been focusing on nature-based activities that enhance resilience and adaptive capacity of our communities through protecting, conserving and restoring terrestrial and marine natural ecosystems, protecting biodiversity, soil and water conservation and controlling land degradation.

In an effort to solve energy poverty and reduce dependence on biomass and fossil fuel, we have just started to implement modest solar energy projects and we saw that it works. But still a lot remains to be done and to be achieved In response to the outstanding call on parties to come up with more ambitious climate action plan, we will soon declare our revised NDC. Bilateral and multilateral financial capacity building will be key to overcome impasses for its expedited and enhanced implementation.

At present the world is facing many challenges. However, global warming is the most overwhelming with far reaching consequences for now and posterity. In the face of this reality backsliding from climate commitments and unfulfilled promises should not be permissible.

Therefore, the Eritrean delegation joins with the voices of developing country parties, particularly African and LDCs that strongly call for:

In conclusion I recall that history is testimony that people when left on their devices often tend to evade common obligation in order to promote their narrow interest. This and the absence of accountability mechanism has been a major problem that undermine trust and confidence in the international system and the whole process of climate negotiation.

The historical relevance of the UNFCCC-COP 27 in Sharm El Sheik will depend on it being able to rebuild trust and revive lost hopes and by taking us together from pledges and promises to implementation.

I thank you all for your attention.

“I thank the Government for Making Sure that no Child is Left Behind” Ms. Shaheen Nilofer