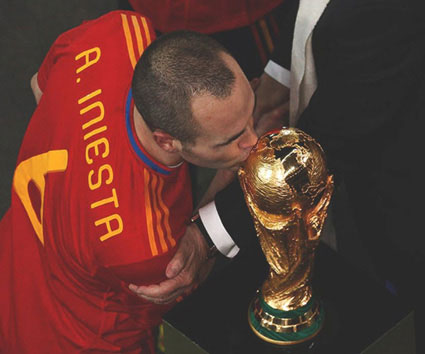 Tomorrow, pubs around Asmara’s famous Harnet Avenue will be filled with youngsters discussing team lineups as if they are the ones who make the final decisions and chatting about the headlines making the Football websites leading up to the opening match of the 2022 World Cup.

Hosted once every four years, Football World Cup, the most-watched sports tournament on the planet will start tomorrow night.

With over 1.2 million fans already in Qatar and FIFA’s projection of close to 5 billion TV ratings, the host country will definitely become the center of the world for a month. To quote the FIFA President Gianni Infantino, “The World Cup should be an occasion for joy and unity. It should send a message of hope.” Just by watching we’re all part of the show, in a way nothing else in the modern world can quite match.

Football is an important means for people to form and maintain strong friendships that might otherwise not exist. These social bonds between fans are so strong that many describe them in familial, kinship terms — ‘my brotherhood’ or ‘my family’. ‘Football friends are different from friends in other areas of life. Something special is shared and exchanged by them. The football team is also a ‘friend’ to many fans. In fact, many fans feel that being a fan of the team is like having a long-term girlfriend/ boyfriend.

In Eritrea, football plays a key role in family life, linking the shared experiences of family members across generations and creating a lasting sense of tradition and belonging. The strongest of these relationships is that of father and son. Most men become fans because their fathers would watch games with their children, and many older fans still retain strong memories of these formative experiences. As football fandom is socially inherited within the family, and the passion for football is a unifying event that frequently leads to animated conversations at home in front of the television or around the family dinner table. The role that football plays in this context is very important in maintaining the traditional family unit and its values across Eritrea.

During the world cup, in Eritrea just as everywhere across the entire globe, there’s the purer enchantment brought by the wall-to-wall football of the group stages, the color of the kits and the venues, the excitement of new players and teams, and then the magic of high-stakes moments that mean sudden death or immortality.

With its mortifications and sense of worldwide communion, the World Cup has become a kind of global religion. It is a form of soft diplomacy and a safe outlet for nationalism. For many fans, it is a potent quadrennial madeleine, each tournament summoning memories of previous ones, the lost friends with whom they were watched, and past selves. Sometimes the football itself can be cagey and boring; but most of the time, especially on its biggest stage and canvas, football is art. Individual moves can be balletic, and a team’s routines exquisitely choreographed. Grand narratives unfold and crescendo, tragedies and unlikely triumphs that feature heroes, villains, and occasionally players who contrive to be both.

The mere mention of epic events like Maradona’s goal of the Century, Paul Gascoigne’s tears, Roberto Baggio’s miss, Zinedine Zidane’s headers and head butt, Ronaldo’s redemption, Iniesta’s winner and that seismic 7-1 win by Germany over Brazil will make so many instantly remember where they were and what was going on for them at that time.

Looking back, for me, the 1998 world cup made me fall in love with football. I was seven years old, and the final when Zidane majestically rose to the air not only once but twice to score two goals, sent me crying to bed because Brazil lost. The 2002 world cup brought redemption, from Ronaldinho’s mesmeric free kick that sent England crashing out of the world cup to Ronaldo’s two goals that won them the final was pure footballing ecstasy. Football by then was part of my daily life. In 2010 the World cup came to Africa. By then I was in college and had just lost my father to an unexpected illness, football in a way was a healing process, in the final I saw one of my all-time favorite players Iniesta volley the ball into the net. In 2014 another of my favorite players- Messi made it to the final, only to lose 1-0 to Germany.

For the players, it is once in a lifetime opportunity. It is something Lionel Messi covets to win. The only trophy he is yet to win in his illustrious career. The 34-year-old knows well the significance of this winter, but his desire to finish it in glory goes far deeper than anything like his own legacy. It is much more innate. His great rival Cristiano Ronaldo feels the same, while Raheem Sterling and many of the England squad have meanwhile admitted to daydreaming about what it would be like to land back home with that unique trophy.

Those two arms on the trophy “stretching out to receive the world… at the stirring moment of victory” – in the words of designer Silvio Gazzinaga – are so representative in more ways than one. This is what everyone in the game is ultimately reaching for: immortality.