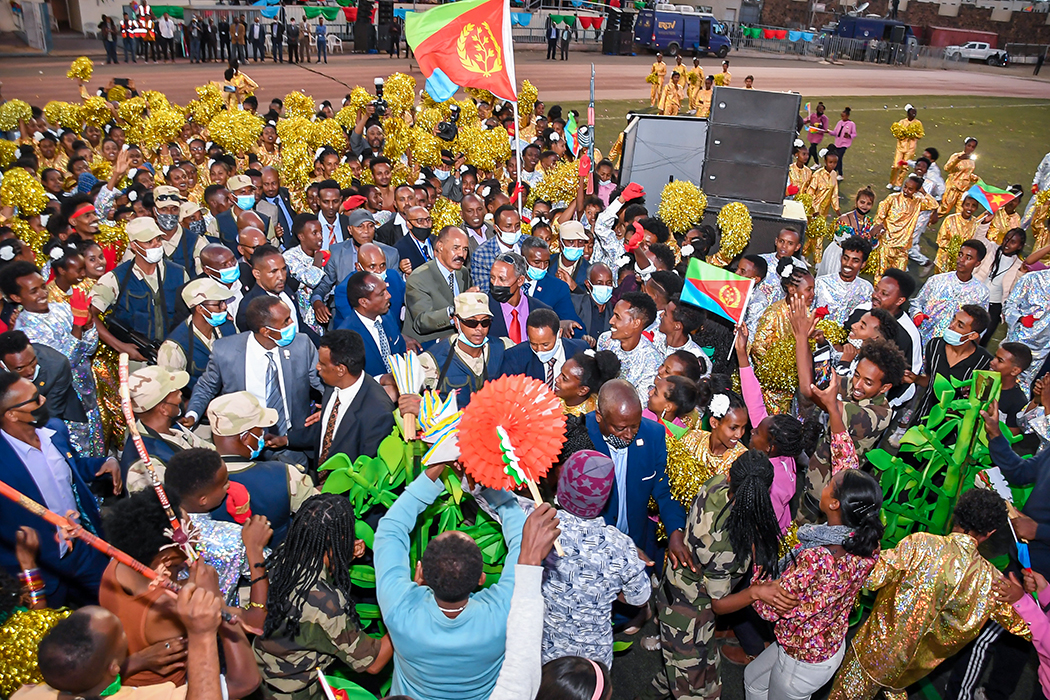 Editor’s note: as the year 2022 draws to a close and all prepare to turn the calendar to 2023, we take the opportunity to look back on the previous 12 months. This article, reviewing the period from April to June, is the second in a four-part series that looks back at some important events and developments that unfolded in Eritrea over the past year. Parts III and IV will be published in subsequent editions of Eritrea Profile.

The month began with World Autism Awareness Day being observed nationwide, including in special events held in Mai-Diminet, Central Region and Assab, Southern Red Sea Region. The colorful events, which involved the participation of officials, various ministries, students, community groups, and other stakeholders, promoted greater awareness and called for fighting stigma and discrimination. 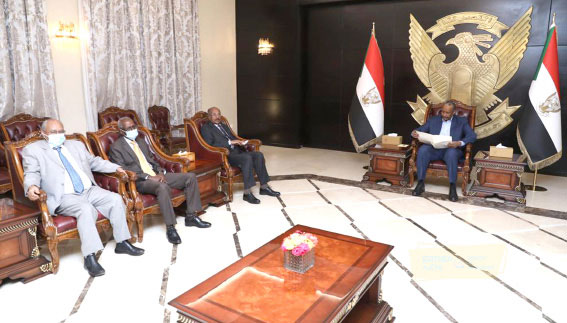 Regionally, an Eritrean high-level delegation paid several working visits to Sudan. During the visits, the delegation, again led by Foreign Minister Osman Saleh and Presidential Adviser Yemane Gebreab, met with General Abdel Fattah Al-Burhan, Chairman of the Sovereign Council, Vice-Chairman, General Mo¬hammed Hamdan Dagalo, and a range of officials and community leaders. The delegation underscored Eritrea’s support for a locally-driven solution to the country’s challenges and noted that Eritrea has confidence in the Sudanese people’s capability to achieve peace, stability, and unity. Additionally, Eritrea’s Ambassador to South Sudan, Yohannes Teklemichael, met with Mayiik Ayii Deng, Foreign Minister of South Sudan, and other officials. They discussed several issues, including strengthening bilateral ties, regional developments, and integration, among others.

April saw a number of development-related activities. Residents of Ad-Omar, Dembe-Zeratsion, Dembe Adi-Tsegay, Guldmit, and Adi-Tesfu came together to support the renovation of an 18-kilometer road, while residents of Ad-Fakai, Hagaz sub-zone, built terraces and carried out other water and soil conservation activities. As well, in mid-April, a new gymnasium, established by local and overseas branches of the National Association of Eritrean War-disabled Veterans, was opened in Mendefera. On 28 April, the Ministry of Health, alongside local and international partners, launched its five-year strategic plan. Running from 2022-2026, the strategic plan includes several core components.

Meanwhile, in the sub-zones of Goluj and Areza, cultural and sports week events for students were organized, while at Mai-Nefhi College of Science, 278 students received awards for academic excellence. Similarly, in Segeneiti sub-zone, 16 students were recognized for registering top scores in the eighth-grade national examination. Last, the National Union of Eritrean Youth and Students organized a vocational workshop for 101 youth in Mai-Aini sub-zone. 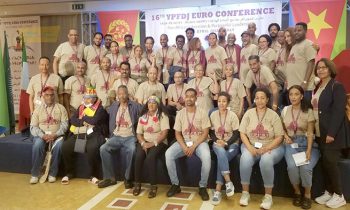 One of the highlights of the month was Nazareth Woldu winning the 12th edition of the Daegu Marathon in South Korea. Finishing the race in 2:21:55, the Olympian set a new personal, national, and course record. 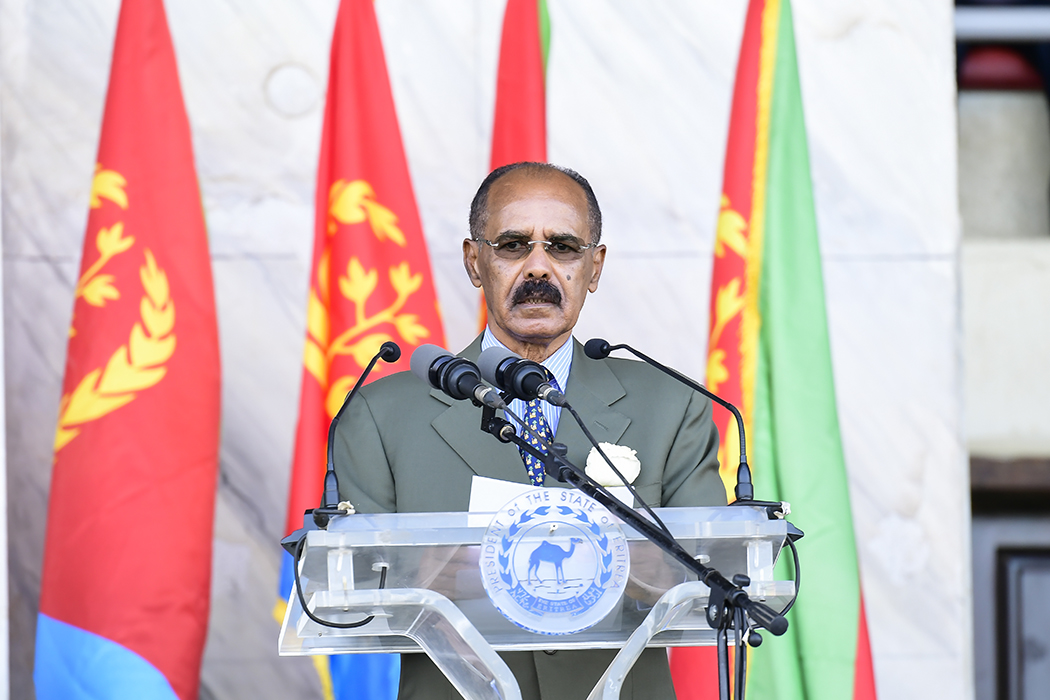 May is a month of celebration and it began, as always, with events marking International Worker’s Day. The official commemoration took place at the National Confederation of Eritrean Workers, with the late Tekeste Baire commending workers nationwide for their multifaceted contributions. On the following day, Eid Al Fetir Al Mubarek was celebrated across the country. Special prayer services, attended by religious leaders and government officials, among others, took place at Bahti Meskerem Square, while Sheik Salem Ibrahim Almukhtar, Mufti of Eritrea and Chairman of Higher Assembly of Eritrean Iftae and Islamic Affairs, extended warm wishes to all. Weeks later, the nation came together to celebrate Eritrea’s independence. At the main ceremony in Asmara Stadium, President Isaias congratulated all Eritreans, while Ambassador Zemede Tekle, Commissioner of Culture and Sports, expressed appreciation to those that contributed to making the festivities so enjoyable. Similarly, Eritreans around the world marked the occasion with colorful, enthusiastic celebrations. Messages of congratulations also poured in from leaders and organizations around the world. 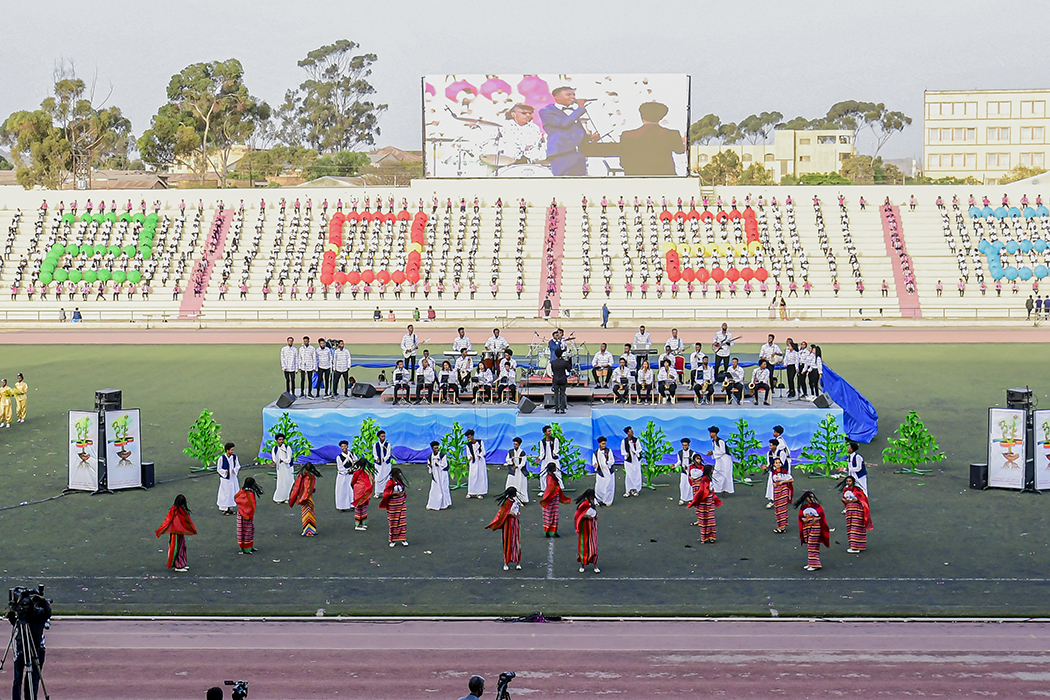 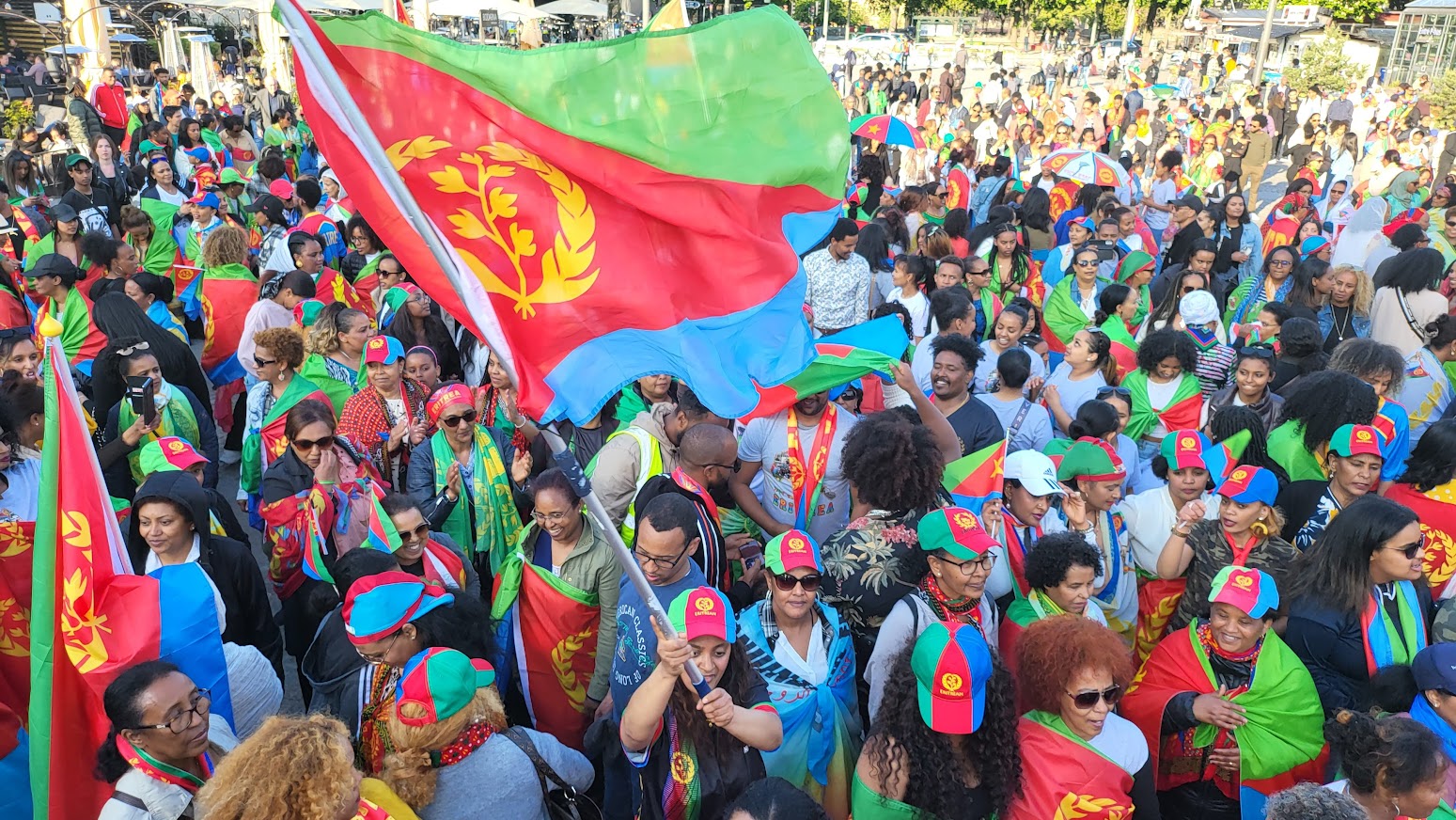 Shifting to development, eye surgeries were conducted on 250 patients in six sub-zones of the Southern region, a community greening campaign was conducted in the Central Region, and residents of Bakla administrative area, Nakfa sub-zone conducted water and soil conservation activities. As well, Keih Bahri Secondary School, located in Central region, handed out awards to 146 students that registered top scores on the annual National School Leaving Exam, while Dembe Sembel Junior and High School added three classrooms at a cost of 2.4 million Nakfa.

Regarding diplomacy, Eritrea’s Ambassador to Sudan, Isa Ahmed Isa met with General Abdel Fattah Al-Burhan, Chairman of the Sovereign Council of Sudan, and Vice-Chairman, General Mohammed Hamdan Dagalo, in Khartoum. During the meeting, various topics were discussed and Ambassador Isa delivered a message from President Isaias focused on strengthening bilateral ties and Eritrea’s support to Sudan. As well, Foreign Minister Osman Saleh and Presidential Adviser Yemane Gebreab met South Sudan’s President, Salva Kiir Mayardit, in Juba and delivered a message from President Isaias. The meeting touched upon topics of mutual interest, and President Isaias’ message underscored Eritrea’s support for the independence and sovereignty of South Sudan. The Eritrean delegation also visited Chad and met with General Mahamet Idris Deby, President of the Military Council. The delegation delivered a message from President Isaias and stressed Eritrea’s readiness to establish cooperation. Within international forums, Eritrean experts from the Ministry of Agriculture participated at a COP15 meeting in Abidjan, and Ambassador Sophia Tesfamariam, Permanent Representative at the United Nations, delivered a statement at the International Migration Review Forum. 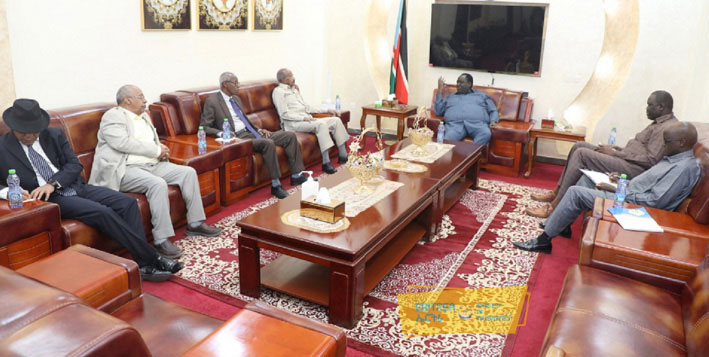 In May, Presidential Advisor and the Head of Political Affairs of the PFDJ, Yemane Gebreab, gave a briefing to nationals in Juba, South Sudan. The discussion touched on numerous areas, including domestic issues and regional developments. As well, YPFDJ branches in Germany conducted a conference in Frankfurt, with the General Consul of Eritrea in Frankfurt, Kibreab Tekeste, meeting with participants.

Some of the biggest cheers of the month were for the trailblazing cyclist, Biniam Ghirmay. Following his historical exploits in March, where he won the Ghent-Wevelgem, becoming the first African to win a Belgium cobblestone classic, he won Stage 10 of the Giro d’Italia and became the first black African rider to win a Grand Tour stage. Unfortunately, he was forced to withdraw from the competition with an eye injury. 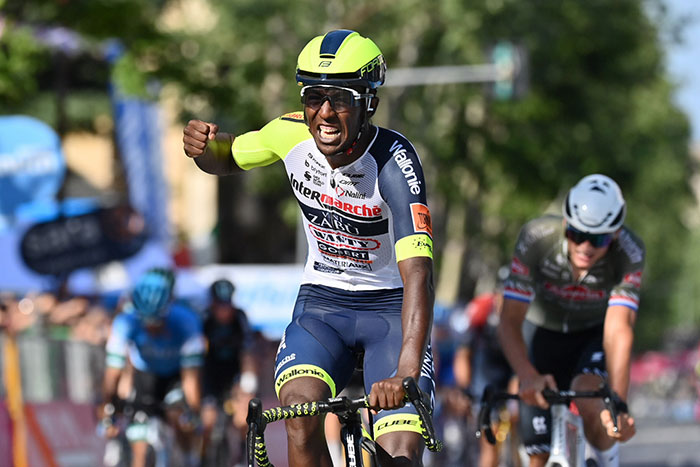 While May celebrates independence, June is about remembering those who paid the ultimate sacrifice to achieve and protect it. Martyrs Day was commemorated by Eritreans nationwide and around the world. At a special ceremony, President Isaias placed a wreath at the Martyrs Cemetery in Asmara, while a nationwide minute of silence was observed. In connection with the occasion, prayer services were conducted at Saint Michael Church and Al-Khulafae Al-Rashideen Grand Mosque in Asmara.

For development, in Nakfa sub-zone, residents conducted water and soil conservation activities, and in all regions of the country, students, offices, and communities planted trees and carried out various environmental or sanitation efforts in connection with Martyrs Day. As part of the nation’s observation of World Environment Day, the Ministry of Land, Water, and Environment organized a discussion forum at the National Confederation of Eritrean Workers Hall, and communities nationwide carried out a range of environment and sanitation activities under the theme, “Only One World”.

Additionally, a team of Eritrean researchers and experts participated at the 11th World Potato Congress in Ireland, and a delegation from the Ministry of Agriculture attended the 32nd Session of the Commission for Controlling Desert Locusts and its 36th Executive Committee Meeting in Saudi Arabia.

In terms of diplomacy, Isa Ahmed Isa, Eritrea’s Ambassador to the Sudan, met with General Abdel Fattah Al-Burhan, Chairman of the Sovereign Council.