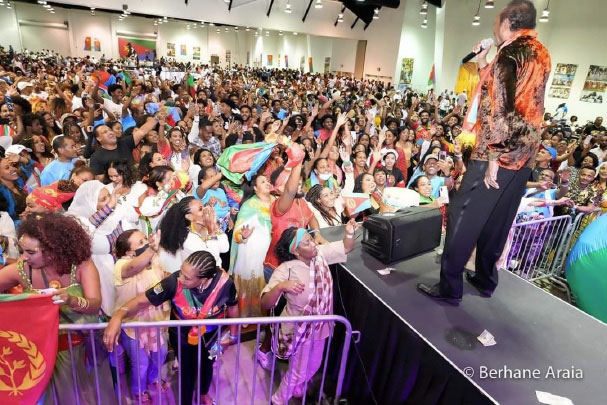 Editor’s note: as the year 2022 draws to a close and all prepare to turn the calendar to 2023, we take the opportunity to look back on the previous 12 months. This article, reviewing the period from July to September, is the third in a four-part series that looks back at some important events and developments that unfolded in Eritrea over the past year. Parts IV will be published in the next edition of Eritrea Profile.

For Eritreans, July is traditionally a month of festivity and celebration. Among the most special celebrations were those for Eid Al Adha, 1443 Hijira year. The occasion was marked nationwide, with the official ceremony at Bahti Meskeram Square overseen by Sheik Salem Ibrahim al-Muktar, Mufti of Eritrea. During his address, Sheik Salem extended warm wishes to all.

Also, a colorful entertainment program for members of the Eritrean Defense Forces (EDF) was held in Mai-Mne sub-zone. The program was organized to recognize the EDF’s immense contributions to development and safeguarding national sovereignty. Finally, festivals were held by Eritrean communities worldwide, including in Germany, Italy, the Netherlands, the United Kingdom, Switzerland, and across Scandinavia. Festivals featured cultural programs, art exhibitions, sports competitions, and seminars, among other activities.

One particularly special moment during July was the inauguration of a new training center in Tessenei. Built at a cost of 33 million Nakfa and sponsored by the Swiss branch of the National Union of Eritrean Women (NUEW), the center is expected to promote gender empowerment through strengthening women’s skills.

July also saw various development-related activities: National Malaria Day was observed at Adi-Guaedad, Gala-Nefhi sub-zone; residents of Halhale sub-zone conducted a range of water and soil conservation activities; and the national summer student greening program, which saw over 23,000 students nationwide take part, was launched. Furthermore, the National Union of Eritrean Youth and Students organized a workshop for 132 youth from across Gash Barka, as well as a three-month training program on electrical installation for 82 students from the COET; Segen Construction Company, with the Ministry of Labor and Social Welfare, provided an extended training program for 63 youth from Barentu and Shambuko; and the NUEW organized a leadership workshop for 80 members from various institutions.

Solidarity is a core component of Eritrean culture, and the month offered several illustrations. The administrative areas of Ingel and Duluh, in Gelalo sub-zone, distributed 42,000 Nakfa to seven local families of martyrs, while staff of the Ministry of Education branch in the Northern Red Sea Region donated 36,000 Nakfa to six families of martyrs. Additionally, students from Dembe Sembel School donated 15,000 Nakfa, as well as clothing and other materials, to patients the Fistula Center at the Southern Region Referral Hospital.

Turning to diplomacy, an Eritrean delegation participated at the 41st Session of the AU Ministerial Executive Council in Zambia, while in New York, an Eritrean delegation led by Ambassador Sophia Tesfamariam participated in the 2022 High-Level Political Forum on Sustainable Development and presented Eritrea’s inaugural Voluntary National Review on the Sustainable Development Goals. Meanwhile, COMESA’s Federation of National Associations of Women in Business held its Horn of Africa Summit in Asmara. Taking place at the National Confederation of Eritrean Workers Hall, the event saw representatives from across the Horn. Last, Hassan Sheikh Mohamud, President of Somalia, visited Eritrea for a four-day visit. He toured development sites, visited Somali cadets in training, and met with President Isaias and other government officials. The trip also saw the two leaders sign a memorandum of understanding, which outlined their agreement to work to strengthen cooperation and relations in various areas.

The eighth month was filled with development activities. Reflecting the principle of social justice, the National Association of the Deaf organized six-month course on sign language for 31 youths from various institutions, while also developing plans to establish more courses across the country. As well, the Culture and Sports Department in the Southern Region organized a seminar on the conservation of cultural heritage for local residents, the Southern Region branch of the Ministry of Education conducted activity assessment meetings in Mendefera and Dekemhare, and residents of the sub-zones of Ghinda, Berik, Hagaz, and Serejeka carried out greening and water conservation activities.

Meanwhile, in Haikota sub-zone, local residents helped to organize an entertainment program dedicated to the EDF. The event, which featured music and cultural activities, was put together by the local community as an expression of gratitude and appreciation for the EDF’s contributions to local development efforts, as well as its role in protection the nation’s sovereignty.

In terms of diplomacy, an Eritrean delegation, led by of Osman Saleh, Minister of Foreign Affairs, and Presidential Adviser Yemane Gebreab, participated at the 8th Tokyo International Conference for African Development in Tunisia. The delegation delivered a speech, while also participating in a series of meetings. Closer to home, Eritrea’s Ambassador to Sudan, Isa Ahmed Isa, convened a public discussion with Eritreans in Khartoum, focusing on domestic issues and regional developments.

Eritrean communities around the world also remained active. The National Union of Eritrean Women branch in Germany organized a seminar for members from 20 sub-branches, and the annual Eritrean community festivals in Canada were enthusiastically celebrated in Calgary and Toronto. In Dallas, the National Council of Eritrean-Americans held a conference under the theme, “Building a Strong Nation Rooted in Grassroots Participation”, before the city played host to the 48th annual Eritrean Community Festival in the US. As a part of events, the mayor of Dallas announced that 5 August would be dedicated as “Eritrea Day”.

The first of the month represented the 61st anniversary of the beginning of Eritrea’s armed struggle for independence. The special day was marked with a commemoration at national level in Barentu, featuring various cultural and music programs. Weeks later, Kudus Yohannes and Meskel were also enthusiastically celebrated nationwide.

As always, September was a month that featured numerous diplomatic activities. President Isaias sent a message of congratulation to Kenya’s newly-elected leader, William Ruto, and he also met with Velamveli Muraledharan, India’s State Minister for External Affairs. During the latter meeting, the two agreed to strengthen cooperation in diplomatic sectors and in global forums. Additionally, President Isaias met with the Special Envoy of the People’s Republic of China to the Horn of Africa, Ambassador Xue Bing. The two discussed modalities of deepening bilateral cooperation in Eritrea’s priority areas of development, and also agreed that development cooperation must be pursued within the framework of regional economic linkages. 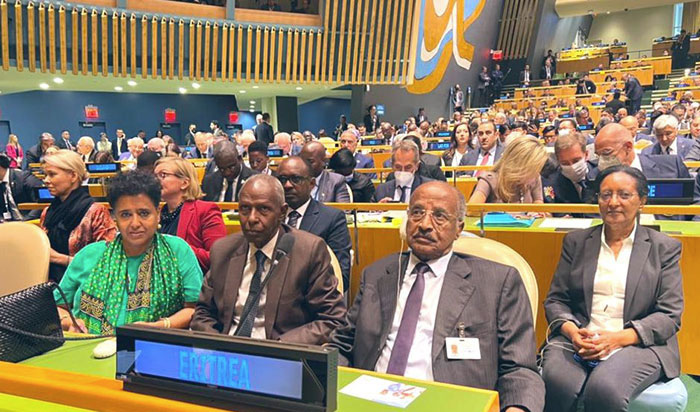 Meanwhile, further abroad, at the United Nations (UN) in New York, a Eritrean senior delegation, comprising Osman Saleh, Minister of Foreign Affairs, Presidential Adviser Yemane Gebreab, and Ambassador Sophia Tesfamariam, participated at several high-level meetings and held bilateral talks with delegates of various countries, as well as with Antonio Guterres, Secretary-General of the UN, focusing on bilateral relations and issues of interest of the two sides. In addition, the delegation delivered official statements, participated at the Ministerial Meetings of the Non-Aligned Movement, Group of Friends in the Defense of the UN Charter, Least Developed Countries, and the Group of 77 and China, and attended other events, including the Transforming Education Summit.

In local development events, the 30th anniversary of the Fred Hollows Foundation was celebrated at the National Confederation of Eritrean Workers Hall, while the National Potato Conference was held at Asmara Palace Hotel under the theme, “One Vision and Harmonized Work for Sustainable Potato Seed Supply”. Both events featured the participation of government officials and various stakeholders. Additionally, a mother tongue pedagogy workshop was organized for teachers in the sub-zones of Forto-Sawa, Sel’a, Kerkebet, and Laielai-Gash; seed and productivity training was provided for 65 agricultural experts from agricultural colleges; and government-led public seminars were held with residents in the sub-zones of Asmat Gelalo, Foro, and Massawa. Finally, Debre Sina Holy Trinity College of Theology of the Orthodox Tewahdo Church of Eritrea held its graduation ceremony, with a total of 221 students receiving diploma and certificate awards.