Editor’s note: as the calendar has turned to 2023, we take one last opportunity to look back on 2022. This article, reviewing the period from October to December 2022, is the last in a four-part series that looks back at some important events and developments that unfolded in Eritrea over the past year.

Culture is at the root of Eritrean society. And a core element of the country’s culture is its rich diversity and faith traditions. Underscoring this, Eid Mewlid Al-Nebi was colorfully celebrated on 8 October nationwide. During the celebration held at the Al-Khulefa Al-Rasheedin Mosque, Mohammed-Seid Beshir, Chairman of the Islamic Awkaf of Asmara, and Sheik Salem Ibrahim Almuktar, Mufti of Eritrea, offered warm greetings to all and delivered a message of hope for peace and prosperity for the country.

The tenth month of the year was also full of development-related activities, including the graduation ceremony at the Orotta College of Medicine and Health Sciences. During the commencement, a total of 269 students were awarded either a degree or diploma. In addition, the month saw the National Association of Eritrean Teachers hold a meeting focused on capacity-building, and Musa Hussein, Director General of General Education at the Ministry of Education, deliver a seminar for students at Warsai-Yikealo Secondary School. This was followed up by the National Union of Eritrean Women organizing a seminar for female students at the same institution. 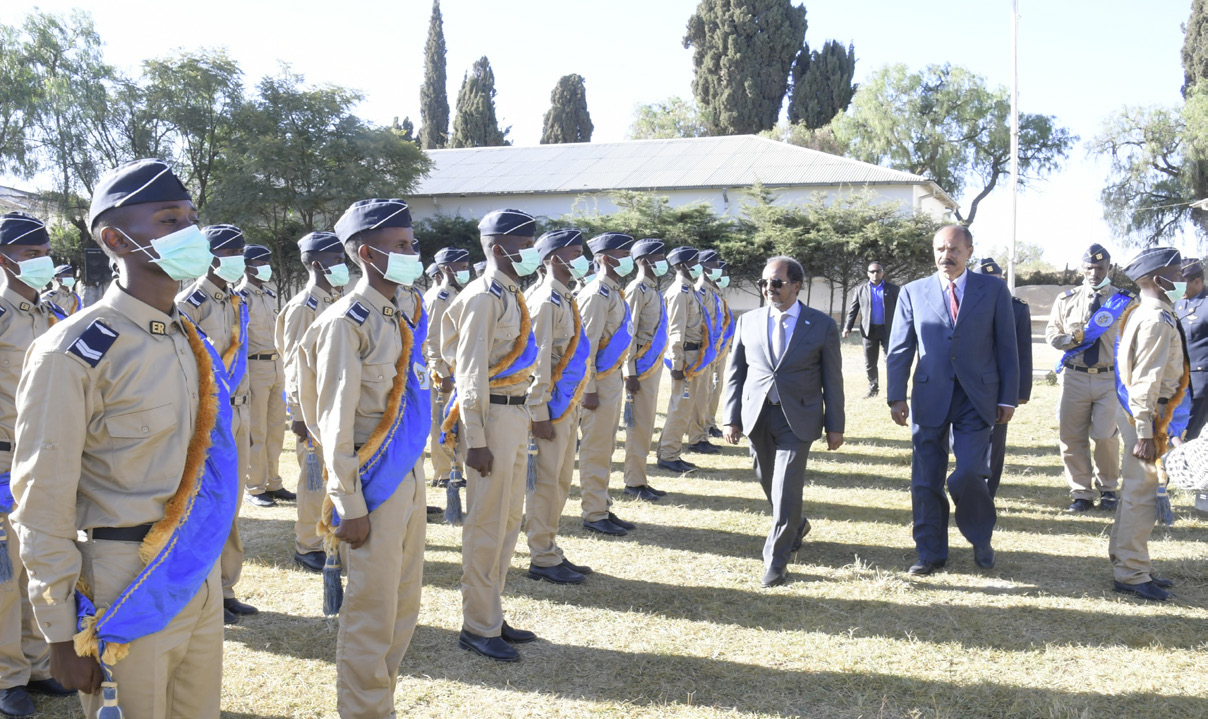 Also in development, International Day of Senior Citizens was observed at national level in Asmara with a ceremony organized at Debat Training Center, and World Food Day and International Day for Eradication of Poverty 2022 were commemorated in Embaderho, with the occasion seeing the participation of ministers, representatives of UN Institutions in Eritrea, and ambassadors of various countries. Finally, the NUEW conducted a seminar for female teachers in the Central Region, around 54,000 livestock were vaccinated against various animal diseases in Hagaz sub-zone, and the Mai-Aini-Mendefera saw repairs through the strong participation of local residents.

In Eritrea, social justice and leaving no on behind are important guiding principles. Reflecting this, the National Association of Intellectual and Developmental Disability organized a meeting in Mendefera to raise public awareness and mobilize support, while the Ministry of Labor and Social Welfare branch in Adi-Keih sub-zone extended school materials to 128 disad¬vantaged students in the area.

In terms of diplomacy and international engagement, the Ministry of Land, Water and Environment, in close cooperation with Global Monitoring for Environment Security and Africa Regional Center for Mapping of Resources for Development, organized a workshop focusing on environmental monitoring and appraisal. The gathering, held in Asmara, saw the participation of individuals from a number of countries.

Meanwhile, Eritrea participated at the 41st ses¬sion of the International Civil Avia¬tion Organization (ICAO), held in Montreal, Canada. The Eritrean delegation, led by Paulos Kahsai, Director General of Civil Aviation Authority of Eritrea, engaged in discussions with officials from the ICAO, including on challenges and prospects within the aviation sector. Additionally, the Eritrean Embassy in South Africa participated at the Diplomatic Fun Fair in Pretoria, South Africa. The Embassy was awarded the Tambo Award, recognizing it for presenting the best overall exhibition.

Last, the Eritrean community in Qatar held its 8th Congress, while Eritrea’s Ambassador to Sudan, Isa Ahmed Isa, presented credentials to Mohamed Yonus al-Menfi, President of the Libyan Presidential Council, as Eritrea’s non-resident ambassador to the country. During the meeting in Tripoli, Ambassador Isa conveyed a message of good will from President Isaias and expressed Eritrea’s readiness to strengthen bilateral relations.

Diplomatic engagements continued into November. President Isaias sent a message of congratulations to Lula da Silva upon his election win in Brazil, and an Eritrean delegation participated at the 17th African Union Extraordinary

Summit and African Continental Free Trade Area held in Niger. As well, President Hassan Shiek Mohamud of Somalia travelled to Eritrea for a multi-day visit. During his stay, he visited development projects, met with Somali cadets undergoing military training, and held extensive discussions with President Isaias and other Eritrean officials, focusing on bilateral and regional issues. Not too far away, in Tehran, Ambassador Sophia Tesfamariam delivered a statement at a meeting of the Group of Friends in Defense of the United Nations Charter, while an Eritrean delegation led by Tesfai Gbereselasie, Minister of Land, Water and Environment and Fasil Gebreselasie, Eritrea’s Ambassador to Egypt, participated at the Climate Change Conference in Sharm El Sheik, Egypt. Notably, Eritrea also signed on to the Food and Agricultural Organization’s Agreement on Port State Measures, a welcome step toward more effectively combating illegal, unreported, and unregulated (IUU) fishing in the region, and one that is expected to play a positive role in contributing to the long-term conservation and sustainable use of the country’s living marine resources and marine ecosystems.

Focusing on development, once again the month was packed. Elections for area administrators and managing directors were conducted in Barentu sub-zone, World Toilet Day was observed in communities nationwide, the National Voluntary Blood Donors Association conducted its annual meeting at the Central Region Administration Hall, and residents in the villages of Adi-Hawsha, Zigib, Adi-Yakob, Tsaeda-Christian, and Adi-Abeto came together to support vulnerable households with harvesting.

Meanwhile, for education, capacity-building, and skills development, the National Union of Eritrean Youth and Students in Gogni sub-zone, in cooperation with the Ministry of Health, provided a training workshop on first aid and control of malaria for 59 youth, the Eritrean Women’s Agribusiness Association and the National Confederation of Eritrean Workers organized a course on business administration for 40 women, 130 staff of the Ministry of Information completed a workshop conducted by the United Nations Development Programme, and the Ministry of Health provided a course on financial and material management for employees. 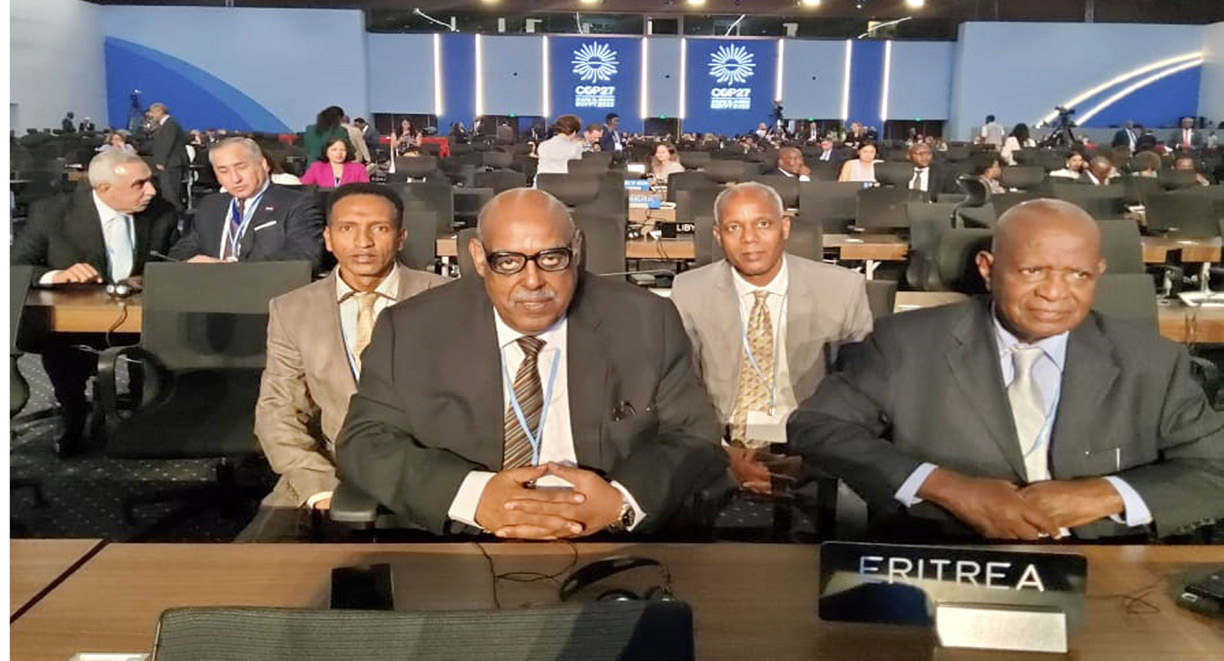 The final month of the year began on a somber note as His Holiness Abune Qerlos, the 5th Patriarch of the Orthodox Tewahdo Church of Eritrea, passed away on 2 December at the age of 96. Subsequently, a funeral service was held on 8 December at Abune Bitsue Amlak Monastery in Godeiti after a touching memorial service at Saint Mary’s Church in Asmara. President Isaias, various government officials, delegates of sisterly churches in Egypt and Ethiopia, religious leaders, and members of the diplomatic corps and international organizations, among others, attended the service.

One of the highlights of both the month – and the entire year – was the inauguration of a new maternity ward at Keren Hospital. Built at a cost of 90 million Nakfa and developed with the support of international partners, the new wing is expected to play a significant, positive role in maternal and child health. Also in health, the Chinese medical team in Eritrea, in partnership with local doctors, performed special spinal surgeries at Halibet Hospital. 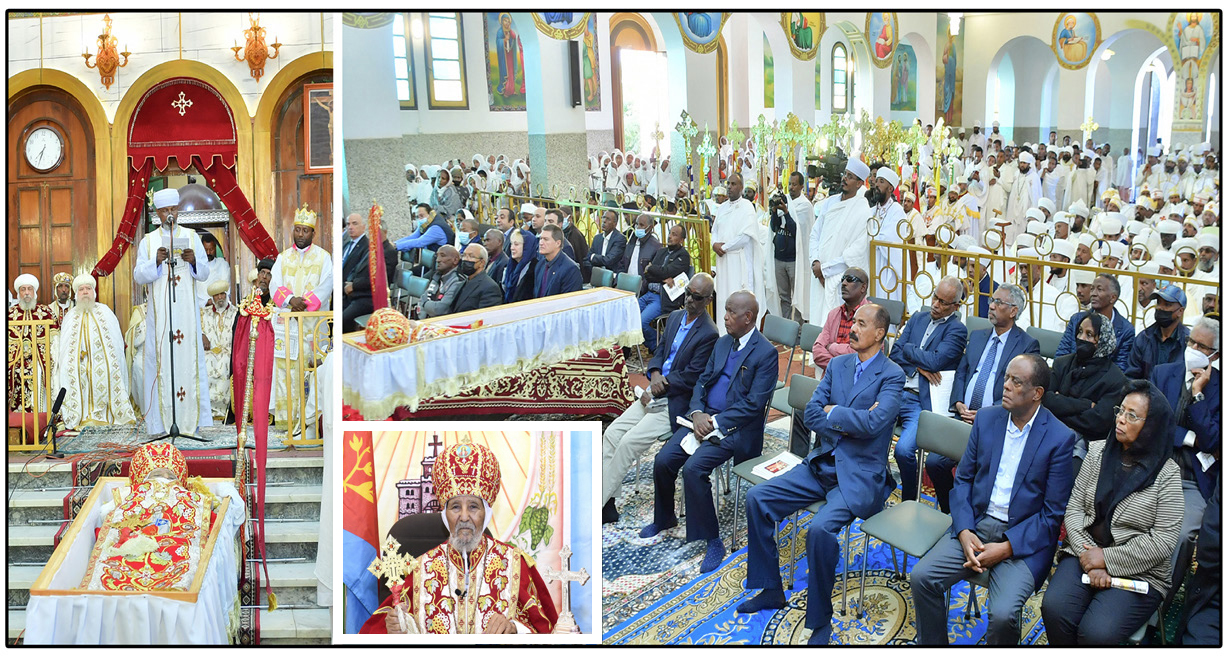 Even as the year wound down, development-related activities continued apace. International Aids Day and International Day of Persons with Disabilities were observed nationwide, helping to raise awareness and mobilize support. As well, the Ministry of Health branch in Gash Barka Region organized a training course focusing on the prevention of communicable diseases, outstanding students at Mai-Nefhi elementary and junior school in Asmara were awarded certificates, and residents of Goluj sub-zone came together to support disadvantaged households with harvesting.

Looking abroad, Eritrean nationals in both Sudan and South Sudan held public meetings. The gatherings, attended by Ambassador Isa Ahmed Isa, and Ambassador Yohannes Teklemicael, respectively, focused on issues of concerns for the local Eritrean communities, as well as Eritrean and regional developments.

Finally, in diplomacy, Eritrean delegations participated at the 15th conference of the UN Convention on Biological Diversity, held in Montreal, and the 10th Summit of the Organization of African, Caribbean and Pacific States, which took place in Luanda, Angola. Additionally, William Ruto, President of Kenya, accompanied by a delegation which included Cabinet Secretary and Defense Minister Aden Bare Duale Gure, Deputy Chief of Staff Josphat Koli Nanok, and other senior Kenyan officials, visited Eritrea. President Ruto and his delegation held talks with President Isaias, along with other Eritrean officials, on enhancing bilateral ties and consolidating regional partnership. At the conclusion of the visit, the two leaders signed a joint communique in which they agreed to bolster bilateral relations between Kenya and Eritrea, as well as improve people-to-people ties with a view to enhancing regional integration. Notably, the two countries also abolished visa requirements for their respective citizens.