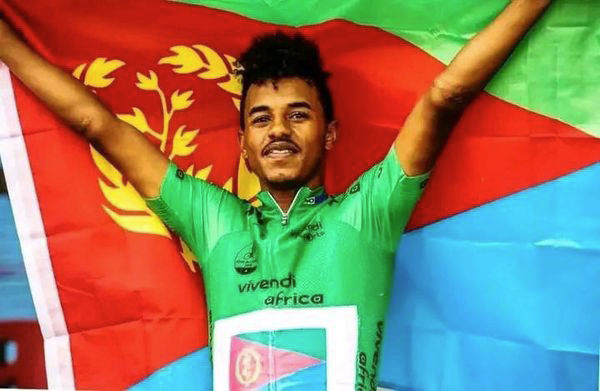 After two years with Androni-Giocattoli, Natnael Tesfatsion is racing with his childhood dream team Trek-Segafredo in 2023. According to Trek-Segafredo team manager Luca Guercilena,23-year-old Natnael Tesfatsion may have only just joined the American squad, but they have been tracking him for nearly two seasons now. “He was an athlete who first came on our radar just under two years ago because we saw in 2021 he was doing well and was very consistent,” Guercilena tells Cycling news during the team’s recent training camp in Spain. “So we were quick to make contact because we believe that if he manages to settle in well in the team, and there’s no reason why he won’t, he’s the kind of rider who could get some really big results in the future. “He’s part of an important generation of African riders, including guys like Ghebre [Trek-Segafredo teammate Amanuel Ghebreigzabhier], who are very gifted and who could soon start making the kinds of massive inroads that we saw the South Americans do in previous decades. And, in fact, with other African riders that is already happening. “With all that in mind, Cycling news spoke to Natnael Tesfatsion about his formative years as a professional rider and where he goes from here. 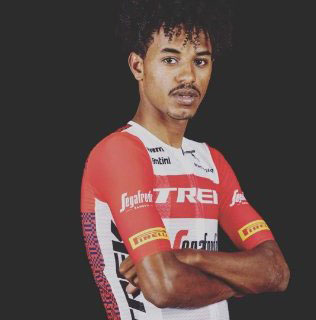 Cycling news: You were with the Dimension Data Continental team from 2019 to the end of 2020. How and why did you sign for them?

Natnael Tesfatsion: In 2018, when I raced in China with Team Eritrea in races like the Tour of Qinghai Lake and Tour of Fuzhou, I did well. I got good results. Dimension Data saw what I was doing and they spoke to [fellow pro] Natnael Berhane who’s also from Eritrea. Then he spoke to me and that was it.

CN: So from there it was onto Drone Hopper-Androni Giocattoli; how did that come about? NT: The plan was to continue with Dimension Data in their World Tour level team in 2021. But I crashed badly in a race in Holland, really hurt my knees and ended up two months at home without any training. So Dimension Data said it would be better for me to stay with the Continental level squad for another year, but I wanted to go to a higher level straight away. So I spoke to my manager, Massimiliano Mori, and I’d like to thank him here for what he did to help me because it was thanks to him that he got me that place at Drone Hopper-Androni Giocattoli.

CN: Drone Hopper always have lots of nationalities in their lineup; it’s an interesting team.

NT: There were some Colombians, Italians, one Eritrean, Argentines, Ukrainians, Romanians … very different kinds of riders. I was living in Tuscany, in Lucca, although I’ve now moved to Vinci, a town nearby. The whole area is great for training.

CN: What were the differences between Dimension Data and Drone Hopper?

NT: The main difference is the language. In Dimension Data we were constantly talking in English whereas at Drone Hopper we talked in Italian and I wasn’t so good at that. I can understand it but I don’t speak it so well. So being in Trek, where English is the first language, that’s ideal. I already knew some riders in the team, which is always a big help. They have one Eritrean [Amanuel Ghebreigzabhier], and I raced with Antonio Tiberi and Filippo Baroncini at Continental level. So I know the Italian guys quite well. I’ve now pretty much-met everybody.

NT: I had a really good 2022 season, winning the Tour of Rwanda for a second time, and getting second in the Girodell’Appennino. So they talked to my manager. Also, it had been my dream for many years to race with Trek because when I was a kid I had a Trek bike. I’ve always liked them.

CN: Whereabouts did you grow up in Eritrea?

NT: In Asmara, the capital. It’s good for training and I’m living at a very high altitude, 2,700 metres above sea level. I’m with my family there. The weather in Asmara is very good; that’s good for bike riding. Of course, when I saw what Eritrean riders like Daniel Teklehaimanot, Merhawi Kudus(EF Education-Easy Post), and Berhane (Beykoz-Team Turkey)were doing, I started following them, particularly Tekle, closely and riding my bike even more. 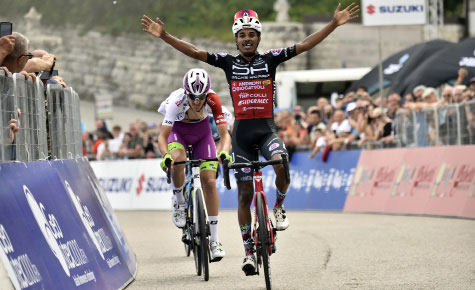 CN: Apart from performing well on the mountains, do you have any other specialties as a racer?

NT: Yes, I can sprint a bit. But my time trialing isn’t any good.

CN: And are you keen on any other sports?

NT: I did like football, playing midfield or left-wing like Cristiano Ronaldo – I’m a big fan of him. But my father likes cycling a lot, and I started riding a bike at 13. I know that’s quite a late age, but I was very good. I finished sixth in my first race, and it all went on from there.

CN: Apart from learning English at school, were you a good student?

NT: I was always skipping class to ride my bike. If you want to be good on the bike, you don’t go to school so much. I studied up to eleventh grade, at 18, and I could have continued, but I wanted to focus on cycling. But I didn’t really think about my future. When you’re young you think ‘hey I’ll be a doctor’ or ‘hey I’ll be an airline pilot’ but you don’t really think that hard. You have to have a good head for that. So I started thinking about cycling.

CN: Where do you go from here?

NT: A good result next year would be a stage win in a big race, like the Giro d’Italia, which I’ve already finished twice, or a hard Classic. Or maybe one day I can do something in the World Championships if they have a route that suits climbers.

Representation of Women in Eritrean Proverbs

HIV/AIDS infection declines by over 60%