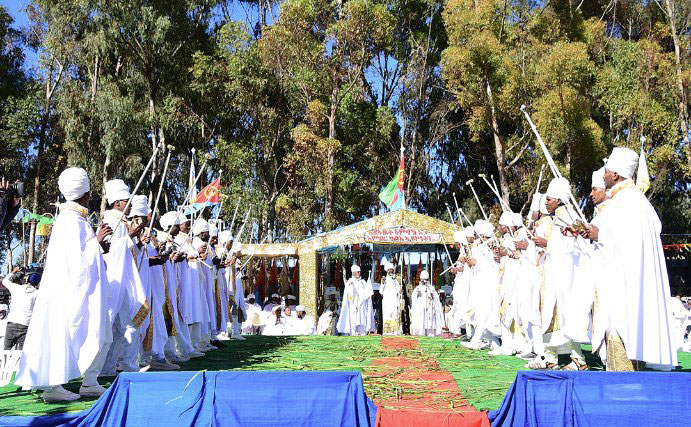 Timket (Epiphany) is celebrated to commemorate the baptism of Jesus Christ in the hands of John the Baptist at River Jordan. The celebration, which is held annually on the 19th of January, is primarily a function in the purview of the Eritrean Orthodox Tewahedo Church, a ceremony as old as Christianity.

The first mystery of the Christian faith rests around Epiphany, which traditionally calls for grand annual celebrations among Christians in Eritrea and Ethiopia. The ceremony led by the Eritrean Orthodox Church in Asmara is the most colorful one. The whole city, especially adherents of the faith, gather around the baptismal pool known as ‘Mai Timket’.

The day marking the eve of the Timket celebration, seven Tabots of the Orthodox Tewahdo Church within the city flock towards Mai Timket from all directions. At the center of each parish church is the Tabot, the wooden slab believed to be a replica of the Ark of the Covenant. This is the holiest object that has to be carried on the head of the archpriest of the parish church with much reverence. 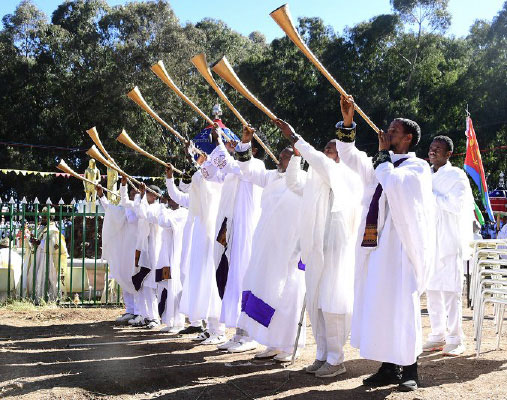 The hymns of St. Yared and other religious songs, as well as popular songs, accompanied by tirumba, koboro, kirar and traditional dances highlight the festive mood of the day. It is believed that if there is not enough festivity and songs, traditional hymns sung by Debteras (seasoned church-educated elite), the Tabot would exert pressure on the priest carrying it and force him to stop from walking farther. The parishioners of every church are dressed up in their finest traditional costumes, respectively resting their Tabot in a tent of their own until the next day when the actual celebration begins.

After mass and the reading from the four Gospels is completed, the blessing of the water in the pool is performed by the Abun, the Bishop of the city. At this instance the focus is on the pool of water, with much jubilation and ululation of the womenfolk. Then the Tabots, surrounded by the enthusiastic faithful, begin to return to their original parishes while more joyous moments are shared by the parishioners, dancing and singing to the best of their performance. This takes almost the whole day.

The pool of water is important for several reasons. It symbolizes the importance of baptism in water and is believed to be the source of healing through the blessings of the water by the clergy. As soon as the Abun and other members of the clergy bless the water in the pool with the holy cross, they sprinkle water on the faithful who are eagerly waiting aside for the showering of blessings. Many take the blessed water in bottles for their sick relatives and to keep in their homes for protection and good luck. 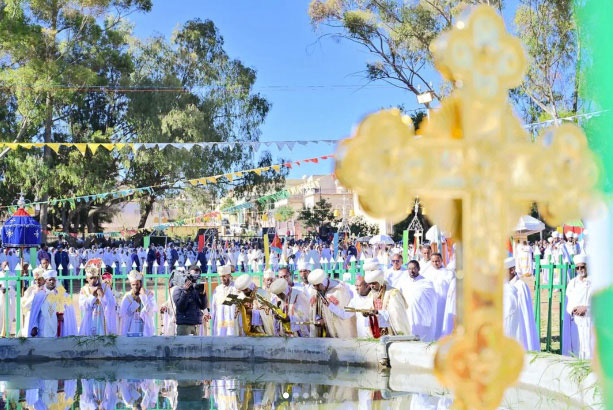 When the ceremony is closed with prayers, it is time to escort back the Tabots to their respective churches, which is done with great enthusiasm. Tabots have a long history in the Eritrean orthodox church as long as the history of “tabot xion” of the Old Testament. Since the introduction of Christianity every church sculpts its own tabot, the most sacred object of the Orthodox Church and a covenant between humans and God.

Another interesting part of the celebration is the clothes worn by believers, who dress up in traditional clothes that signify the importance of the event.

Meeting of Eritrean community in Riyadh