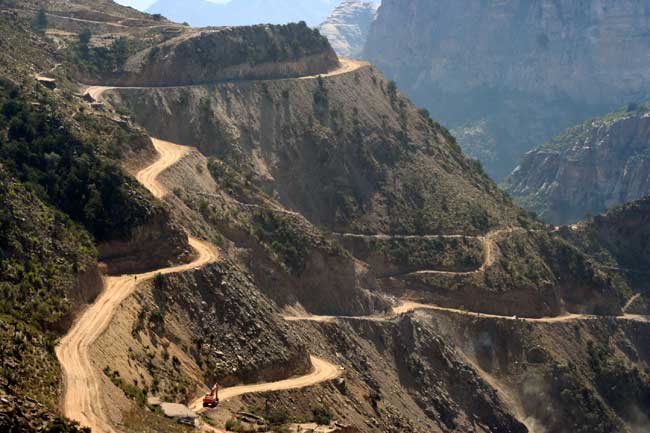 Bideho is a Tigrinya word, with literal English translation, meaning challenge. Bideho is also a frequently used Tigrinya terminology mostly used in doing the undoable, fixing the unfixable and challenging the unchallengeable. That is may be why the Bideho Construction Company is penetrating the impenetrable.
When the Italians colonized Eritrea in 1890, the Italians had to connect the highland plateaus of Asmara and its environs with the eastern lowlands of the Massawa port and of course other places of Eritrea with utmost strategic importance to the colonizers. That mission had to be done to meet the demands of the Italians and put the needed infrastructure well in place so as to maintain their stronghold in Eritrea.

One of the major strategies of the government of Eritrea after independence was therefore, to renovate and expand the infrastructure sector and construct new projects.

Among the handful of major projects of high strategic importance being implemented within the framework of the Warsay-Yikealo national development campaign is the Igla-Demhina road that connects the Southern region with the Northern Red Sea region in a few kilometers distance.

The shortest distance between two points as they say in mathematics is a straight line. Before the commencing of this significant project, the two regions were connected through bushes, escarpments and terrains, which seemed to have left no space for transportation of vehicles. Hence, apart from using camels or other traditional means of transportation, the two regions had to cross the central region to connect with each other, which made the journey long and tiresome.

For that reason, the only way to apply the basic principle of geometry was by defying nature. Going down from over 2000 meters above sea level to ground zero of the sea level position in a few kilometers distance and through impenetrable bushes and terrains would just seem like a challenge to ordinary people. But, as has been mentioned in the beginning of this story, challenge is one of the most frequently used words in the Tigrinya dictionary.

The Igla-Demhina road runs only 35 kilometers, but the distance is far too short when compared to the challenges and hurdles in between the said distance.

The hardest part of the project is drilling and penetrating through the granite rocks that lie in about two kilometers distance of the 35 kilometers long road. Let alone vehicles, even camels were encountering hurdles to pass through that specific area, before the unparalleled members of the Bideho Construction Company turned it in to a plain.

Most of the employees of the Bideho Construction Company recall the challenging moments and junctures that tested their mettle. Operating the heavy machineries in the steep escarpments does not leave any space for a simple mistake. Dozer operator, Berhane Gebrelibanos has been employed in this field of work for over 10 years, but he says, “This is the most challenging work I have ever been engaged in my entire career”.

If there had not been any other incentive besides the monthly payment for the employees, there would not have been anybody to volunteer for such a tough job. Besides its not just a job one would apply to earn his leaving, the reason goes way beyond earning money, but unparalleled devotion to promote national development programs.

The Igla-Demhina road is just a wonder to every single person that gets the opportunity to visit the site, but then again, strategically speaking, the finalization of the work is expected to abridge the distance from Adi-Keih to Massawa by close to 180 kilometers.

Only 35 employees were assigned to the task of penetrating the, what has been believed to be impenetrable landscape; they worked day and night without a brake even during the weekends. That is the true essence of dedication and a work of strong belief.

If there is a will there is always a way is a perfect saying that matches the incredible employees of the Bideho Construction Company. Although the company has undertaken a handful of similar infrastructure projects in many corners of the country, the Igla-Demhina road is indeed the most amazing work.

The sophistication of the engineering work performed in the project on one hand and the dedication of the employees on the other is beyond belief, and their payment is not just material things, but opening of a new page in the chapters of infrastructural work of Eritrea.

Indeed, speaking from the archaeological point of view, the construction of the Igla-Demhina road is of paramount importance. It is like a time travel from the ancient times of the early humans to the middle ages.

The highland plateaus of the Adi Keih sub zone is a place were the ancient archaeological sites of Metera, Kohaito and Tokondae are located, while the Denakil depression and the Dandero valley are the sites where the early homo chromium of around one million years were excavated.

Above all, the true meaning and principle of the Eritrean government, “Self reliance”, is being performed in this incredible work. Every single task, including the planning, designing, surveying and implementing is being undertaken by the local human resource.

The infrastructural beauty the construction of the work has induced to the natural beauty of the escarpments that is commanded by the highland plateaus is also another significant chapter in the domain of the Eritrean tourism.

One of the Eritrean government’s utmost priorities in its agenda is construction of roads and ensuring food security. The Egla-Demhina road is by far, one of the very strategic decisions made in the sector of infrastructure, which opens the door towards a multifaceted growth and development of the country.