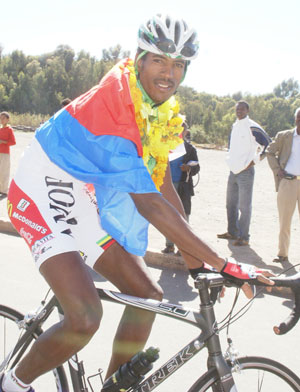 Here is what the UCI posted after Daniel’s successful heart operation on its website and his amazing comeback.“A few months ago, Daniel Teklehaimanot underwent a heart surgery that could have put an end to his career as an elite athlete. However, the talented Eritrean rider, who is currently training at the UCI’s World Cycling Center (WCC) in Aigle, Switzerland, chose to meet this challenging situation with courage and determination. Thanks to his remarkable physical abilities, he was quickly able to rejoin the group of road racers coached by Michel Theze and Sebastien Duclos.

Daniel Teklehaimanot, a highly talented athlete, finally saw his efforts rewarded in the Ain-Jura classic, which he won by a comfortable margin.

Daniel Teklehaimanot’s achievement is an extremely rewarding result for the entire WCC, confirming as it does the value of the partnership set up between the UCI and the National Federations with the aim of training riders from countries where the cycling movement is still building towards its full potential.”
UCI Communication Services

Daniel Teklehaimanot has afterwards stood 6th in general classification at Tour de L’avenir held from 5-13 September 2009 in France. Tour de L’avenir is a 48-year old competition which was once won by one of the biggest Tour de France contenders Denis Manchove back in 2001.
18 national teams took part in the 9 stages competition of the 2009 edition. A total of 1300 km was

Making Their Lives Better: Colloborative Efforts of the Government and the People To Help Martyrs’ Families